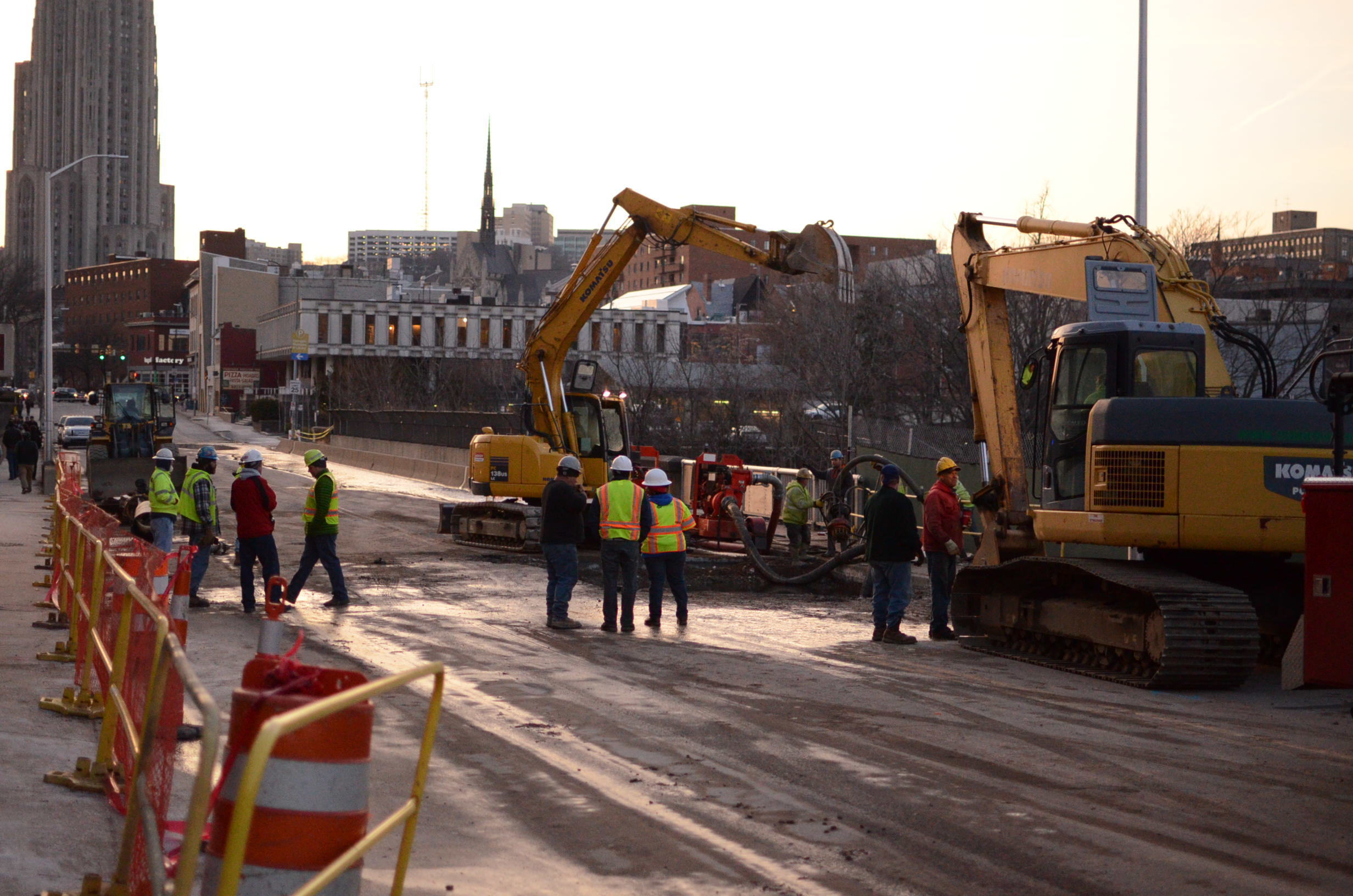 This Saturday, members of the Carnegie Mellon community traveling down Forbes Avenue were greeted with the sight of multiple construction workers hard at work attempting to halt damage that took place the previous night. At around 11 p.m. last Friday, a 12-inch water main ruptured on Forbes Avenue, near Hamburg Hall, the Tepper Quad construction site, and the Robert Mehrabian Collaborative Innovation Center (CIC), Carnegie Mellon officials reported in an email that was released to the student body.

Among the many workers in hard hats and other individuals attempting to resolve this issue were Pittsburgh Water and Sewer Authority members, Pittsburgh Public Works, CSX Railroad, Campus Design & Facility Development, and Pittsburgh and University Police officers. The effort being put into this project was put into perspective when witnessing the massive amount of water spewing from the water main, which was traveling along Forbes, creating its own self-contained flood.

As a result of this water main break, the section of Forbes Avenue between Morewood Avenue and S. Craig Street, as well as one of the two adjacent sidewalks, was blocked, halting traffic in this area. Additionally, Neville Street, from the Bellefield Boiler Plant to Winthrop Street, remained closed.

Students were seen shuffling along the remaining open sidewalk on Forbes with many stopping to stare at the event that was unfolding in front of them.
This not only affected traffic along Forbes Avenue, but due to its location near the Carnegie Mellon campus, it also had a direct impact on students in nearby buildings. Hamburg Hall, Smith Hall, and the Robert Mehrabian Collaborative Innovation Center (CIC) were facing lower and lower water pressure throughout the day until the buildings lost water service completely. Students and faculty members within these buildings were advised to use restrooms elsewhere throughout the day.

Due to the inaccessibility of traffic in this area, the Warner Hall, Gates, and CIC parking garages were closed off. Carnegie Mellon officials compensated for this by making free parking available “in the East Campus Garage for those permit holders affected by the traffic restrictions,” as stated in an official Carnegie Mellon alert post.

Passersby were advised to stay clear of the area due to concerns for their safety when approaching the heavy machinery that was being utilized to contain the issue. As stated in an updated alert posted on Sunday morning, it is still unclear when repairs will be completed.

As of 12 p.m. Sunday afternoon, water service was reportedly restored to Hamburg Hall, Smith Hall, and CIC. In the updated alert message, University officials stated “PWSA’s replacement of a valve leading to a 6-inch water line to Hamburg Hall was instrumental in restoring water service.” The workers involved in this project should be commended for their relatively speedy work when faced with this unexpected emergency.

The continuous updates that were posted throughout Saturday and Sunday in response to this water main break can be found on www.cmu.edu/alert.