Pro: Pope Francis right to call out Trump on immigration 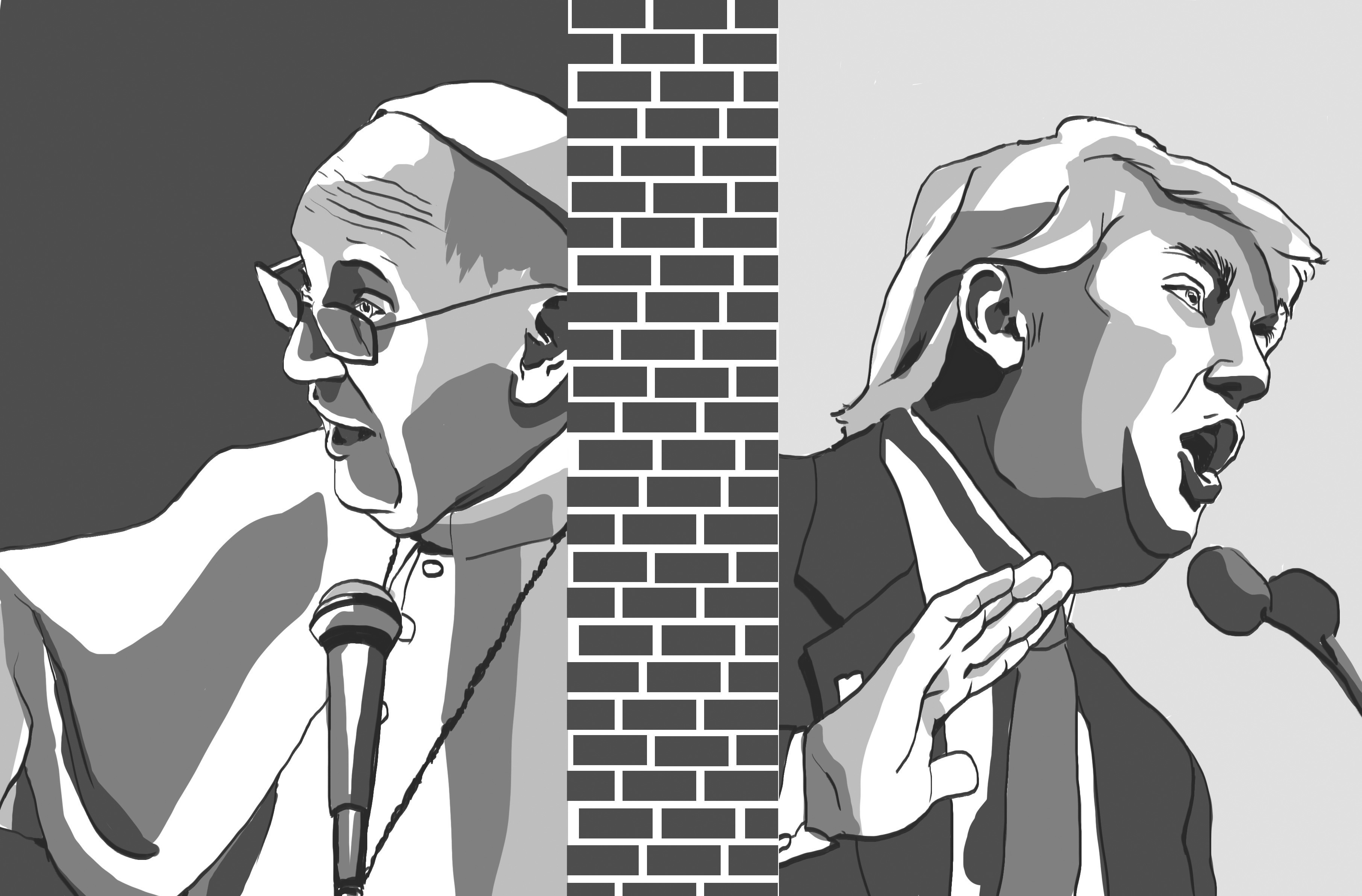 Credit: Sandra Kang/
Editorials featured in the Forum section are solely the opinions of their individual authors.

On Wednesday, Feb. 17, Donald Trump took on his most formidable foe yet: the Pope. While returning from a visit to Mexico’s border with the United States, Pope Francis was asked about Donald Trump. He said, “A person who thinks only about building walls, wherever they may be, and not building bridges, is not Christian.” The Pope’s comments sparked widespread controversy and debate over whether the Pope had crossed a line by commenting so frankly on politics. Donald Trump responded, “for a religious leader to question a person’s faith is disgraceful.” Other Republicans defended Trump, suggesting that it isn’t the Pope’s place to get involved in politics. They couldn’t be more wrong.

Why is it disgraceful for a religious leader to question your faith? Isn’t it a religious leader’s job to question your faith and challenge you to be a better Christian? The Pope, the world’s most influential and popular religious figure, is clearly qualified to offer his opinion on what makes a good Christian. You don’t have to agree with the Pope, or even adhere to the same faith as him, to admit that he clearly has some authority on the matter.

“But Emmett,” I hear you say, “It’s not the Pope’s place to get involved in politics.” Perhaps, under different circumstances, this would be true. But politicians, especially Republicans, routinely parade their faith to earn votes. And if Republicans make their faith an issue of the political debate, then criticism about their faith is fair game, especially from religious leaders who have authority in that field to offer insights.
Donald Trump has stood on a stage in Iowa, not once, but twice, waving his Bible in the air to prove his Christian bona fides to religious supporters. Ted Cruz rallies are as much religious revivals as they are campaign events. Marco Rubio has an ad called “Faith” in which he says, “The purpose of our life is to cooperate with God’s plan.” All three candidates fight over Evangelicals like three raccoons who have found the last trash can on Earth.

The Pope isn’t infringing on the political world; rather, the candidates brought religious discourse into the political fray. Since the Pope is one of the world’s most important religious leaders, and since Republicans made religion an election issue, the Pope has every right to get involved in politics. If the candidates made their economic platforms a central campaign issue, you wouldn’t bemoan economists for offering their analysis. In the same way, you can’t begrudge the Pope for taking a stance when the candidates have made their faith central to their campaigns.

“But Emmett,” you say, in that pesky way that you insert yourself into my articles, “faith is different. It’s between each individual and the God that they worship. It’s not supposed to be about how you live your public life.” To the contrary, the Pope and many other Christians believe that the only way to truly express genuine Christian belief is to act like Jesus acted. Which is to say by feeding the hungry, and healing the sick, and forgiving people, and practicing nonviolence, and resisting cruelty and oppression.

I would direct you to a little text called the Bible, which, I’ve be told, offers some important insights about Christian living. In Matthew 25, Jesus himself said, “Whatever you did for one of the least of these brothers and sisters of mine, you did for me.” In other words, Christians show their love for Jesus in the way they treat others. Jesus also said, in John 13, “A new command I give you: Love one another. As I have loved you, so you must love one another. By this everyone will know that you are my disciples, if you love one another.” A Catholic could also focus on James 2: 17-24, which says, “Faith by itself, if it is not accompanied by action, is dead… You see that a person is considered righteous by what they do and not by faith alone.”

Catholic social gospel, which the Pope obviously advocates, teaches that it is every Christian’s responsibility to enact their faith and improve the world through acts of goodwill and compassion. If they don’t, then they can’t really be said to have much faith at all.
You don’t have to agree with this interpretation to understand why the Pope said what he said. To many evangelical Christians, the most important relationship is a private one between each individual and God. But to many others, including the Pope, Christians express their love for God by loving other people.

Pope Francis also needs to speak up because his is a much-needed perspective. When it comes to immigration, I wish that the Republican candidates, especially Donald Trump, would take a look inside the Bibles that they so gleefully wave about:

Exodus 22:21 — “Do not mistreat or oppress a foreigner, for you were foreigners in Egypt.”

Leviticus 19:34 — “The foreigner residing among you must be treated as your native-born. Love them as yourself, for you were foreigners in Egypt.”

Deuteronomy 10:18-19 — “He ... loves the foreigner residing among you, giving them food and clothing. And you are to love those who are foreigners, for you yourselves were foreigners in Egypt.”

That, more than any other reason, is why it’s so important for the Pope to get involved. If we want to overcome Donald Trump’s nativist, racist rhetoric on immigration, we have to do it by working within the prevailing argument planes within the Republican party, and one of those planes is religion.

Whether you believe that faith belongs in political discourse or not doesn’t really matter, because it’s already there. Religion is a major aspect of political identity, especially in the Republican party.

The least we can do is value religious voices like Pope Francis that are leveraging spiritual arguments to advocate justice and mercy for immigrants. It is through those types of arguments that we have the best hope of making a difference.