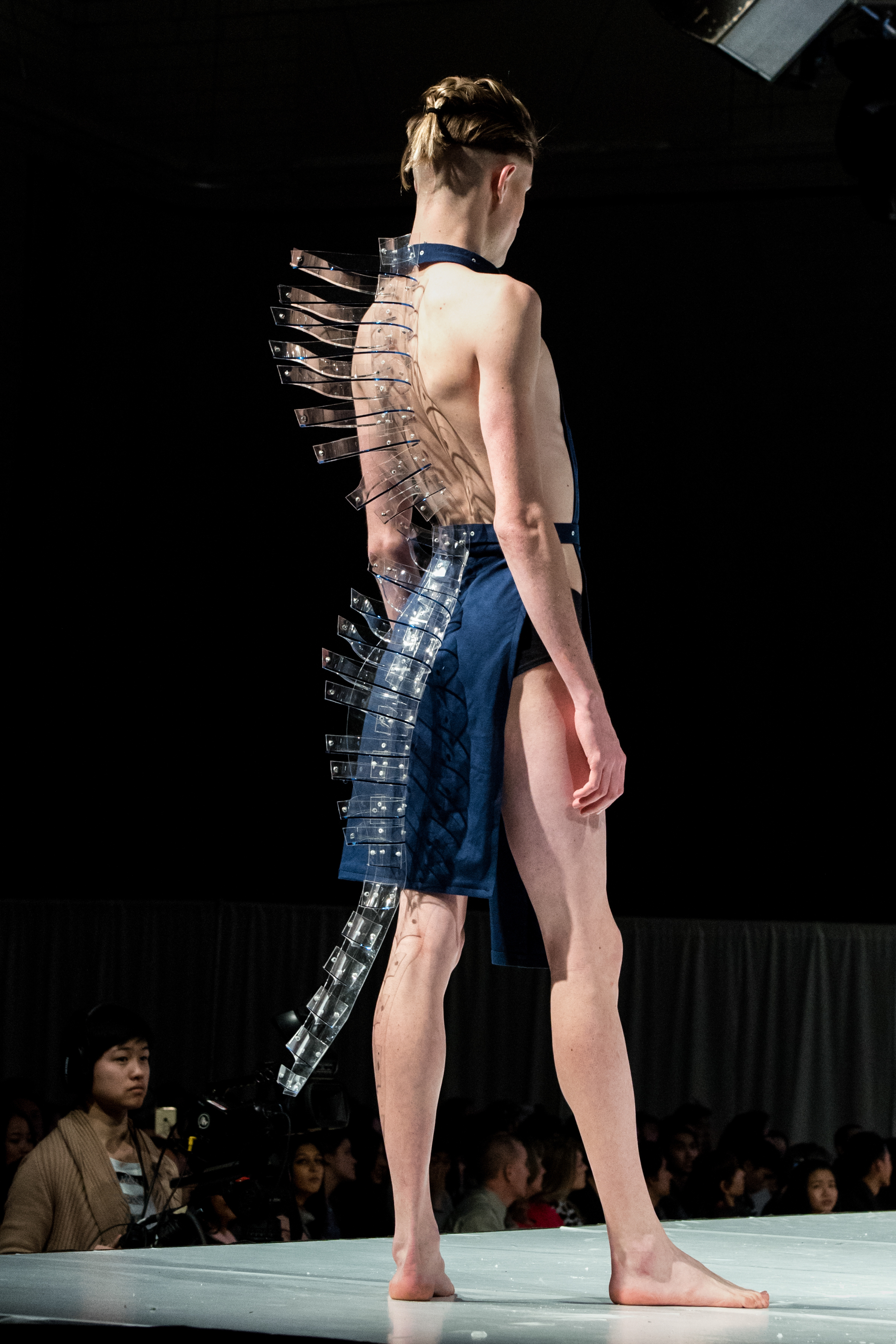 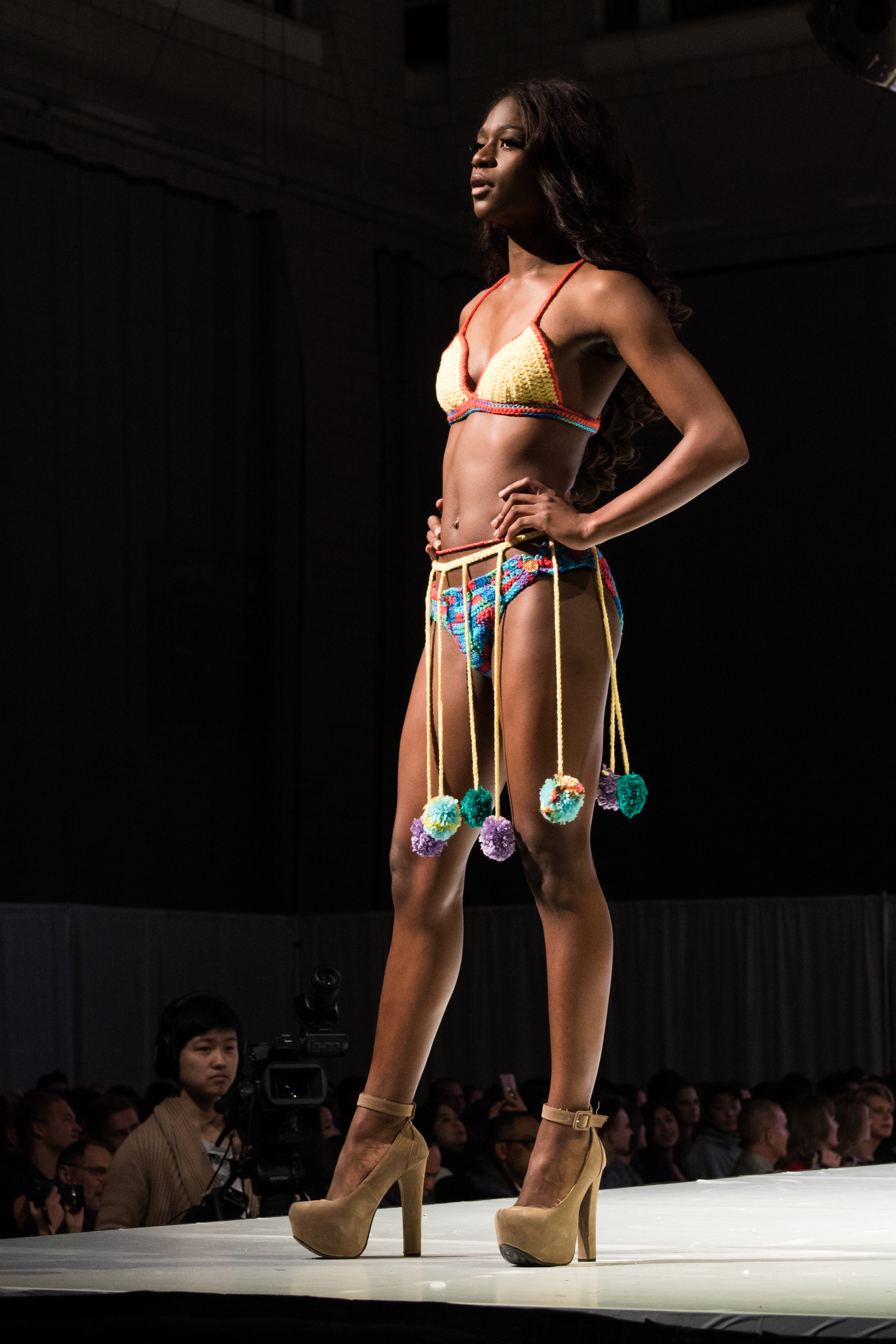 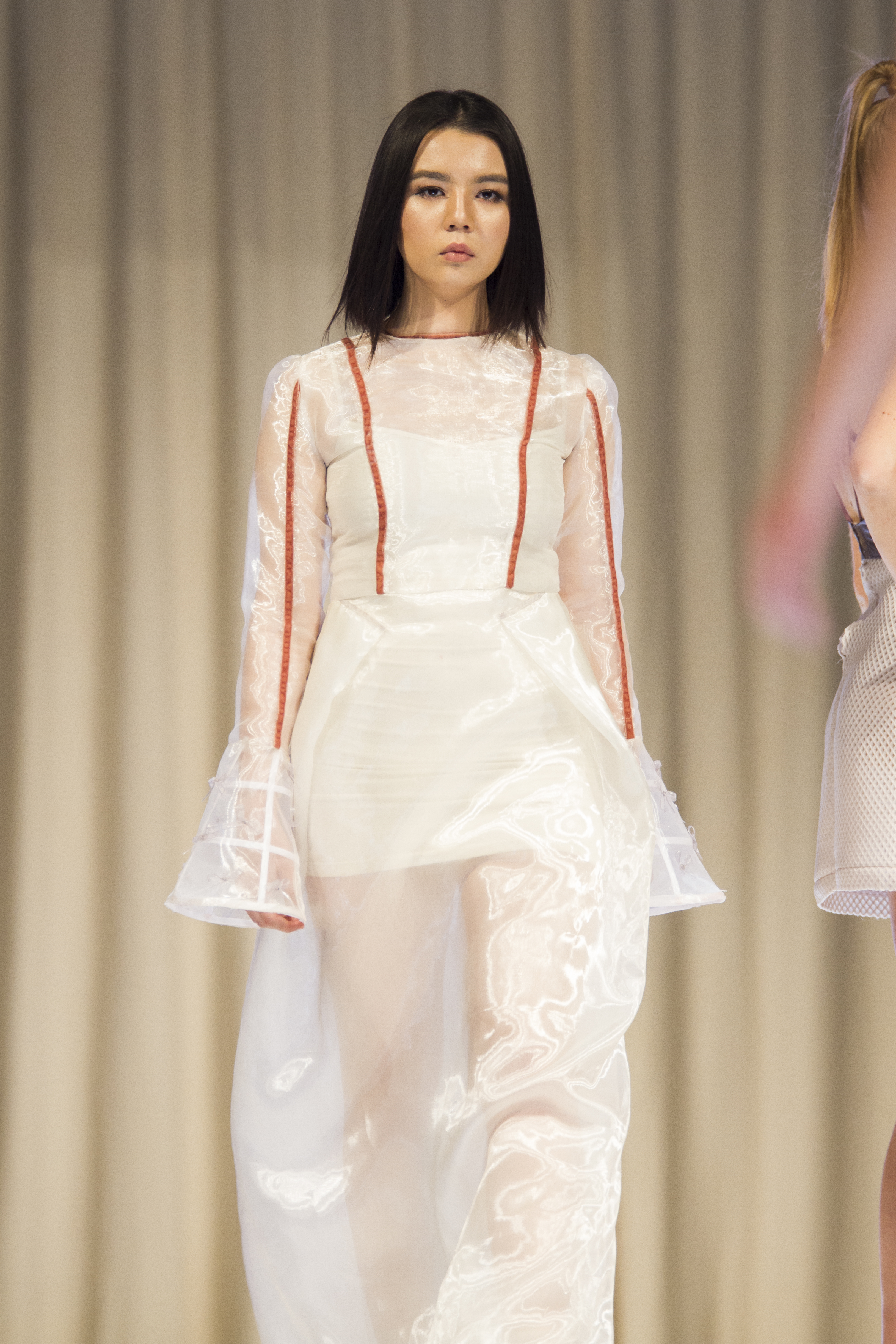 This past Friday, Feb. 13, Carnegie Mellon’s annual Lunar Gala was held in Wiegand Gymnasium. This year was the show’s 20th anniversary, so the hype was pretty grand. With separate teams for producing, modeling, designing, dancing, tech, and others, this event really showcases the incredible passion of Carnegie Mellon students who have spent much of last semester and January preparing for it. But I know that’s not why you’re reading this article. So without further adieu, let’s review the good, the bad, and the downright strange looks that graced LG’s 20th anniversary stage.

The first line, Polymorphism, by senior architecture major Richard Chou and junior art major Katherine Zhao, was described by the viewer’s pamphlet as a collection of pieces that represent “a structural form of data.” This collection featured a good amount of leather, blacks, grays, and metallics alongside hard, metal accents such as a giant, jauntily angled wire cube surrounding one of the models’ heads, and two wing-like forearm wraps, which seemed to hold the model’s arms in place. In all, this was a very solid collection. The geometries were unexpected and intricate, and the overall effect was interesting to watch.

Next, we had Cymatics by first-year design major Anna Gusman and first-year art major Ariana Nathani. Described as “an exploration of the way sound interacts with its environment on a molecular level,” Cymatics displayed quite an intriguing set of patterned pieces. My personal favorite was the first look — an overlarge, short- sleeved top whose entire front was cut into a gorgeously intricate and fluid pattern that struck the right balance between sexy and tasteful. The only glaring negative I saw in this collection were the clear plastic visors some models wore over their faces; they looked a bit like cut-up Coke bottles to me.

Up next was The Barracks by junior industrial design major Linny Tan. Tan’s line was described as “a series
of military-style lingerie that investigates the clash of hyper masculine and feminine in a quest for androgyny.” This collection played a lot with hints of color, using a primarily black base fabric and adding accents of a not-quite-floral pattern. There were many interesting pieces here, particularly a mesh top with a folded lapel- like chest covering which looked very luxurious. Also, many of the bottom pieces were beautifully executed.
Exuviae, a line built around the idea of exoskeletons, featured beautifully crafted plastic accessories, which made the relatively simply blue pieces come alive. Most times with fitted undergarments, they can end up looking bunchy or awkward, but these fit each model’s curves perfectly. This collection was an overall success.

Moving on, we had Dauntless by junior chemistry major Eunice Oh, and senior electrical and computer engineering majors Katherine Wang and Yiru Yao. This collection “incorporate[d] elements which highlight the elegance of a woman and the fierce nature of a warrior.” Dauntless featured a primarily black base garment embellished with some large, structured, gold armor pieces. This collection seemed to be an immediate crowd favorite, with the first look — a fitted leather and fabric cocktail dress with gold, wing-like shoulder pads — earning several hoots and hollers. Overall, this collection had a toe in dynastic style, with bright reds, golds, and blacks, and a toe in Alice and Wonderland, with the rose accents and the regality of many of the pieces.

Next was Abraxas by junior mechanical engineering major Melissa Zucker, junior humanities and arts major Catherine Zheng, and senior architecture major Shanna Chan. Described as “an exploration of the classic female silhouette through abstract mathematical concepts,” Abraxas had a few striking pieces — namely the cut-up black leather dress with huge shoulders and a slight accentuation of the hips, which looked like something straight out of this world. Overall, this collection was a nice sight.

Imperatrice, by sophomore business major Angela Liang, first-year design major Shannon Lin, and first-year humanities and arts major Hilary Lai, was inspired by Wu Zetian, “the only woman ever to rule China.” This collection played with cute, girly silhouettes, but each piece had a little bit of an edge to it. My favorite of the harder accents were the pyramid accents, placed on the models’ tops in the center of their chests. It was
just enough point to say “I’m coming for you,” but not enough for you to be super nervous about that fact.

Next was Filigree by junior neuroscience major Noa Fineout. Fineout’s collection was a journey for me. At first, I absolutely hated all six of the garments. But when Fineout herself came out to receive her flowers, she was wearing a piece as well, and it all kind of made sense. What I hated about the collection was that it seemed very unfinished and sloppy, but when Fineout came out, with her unsewn sleeves and busting seams, I figured that it was all part of the concept — a deconstruction of these multi-layered, Victorian undergarments. I believe that Fineout’s own garment was the highlight of her collection.

Up next, we had XOAIX, pronounced just like it looks, by senior drama major Becki Liu. This collection, described as a “daydream inspired by the romantic colors of the south of France,” had its good points and its not-so-good points. With the exception of the very first garment — a short dress with a lace neck accent — many of the pieces just didn’t do it for me. They hung a little strangely and didn’t flatter the models’ figures enough to look good, but didn’t break away enough to look very conceptual. This was a miss, in my opinion.

One of the most exciting and innovative lines was Pom by sophomore design majors Emily Mongilio and Lily Fulop. This collection was all “crochet lingerie.” I’ll let that sink in. Blending the “soft, and fun” aspects of yarn work with the “risque and provocative,” Pom was one of the standout collections and took the idea of hooking to a whole new level. This was one of the few collections where the models actually had some fun. Adorned in a rain of pom-pom puffs, two of the models spun around their poms, and this brought a slightly sexy aspect to this already out-there line. Plus, the fits on these bottoms were impressive; as a crocheter myself, I was super impressed with how well the booties were cradled. It was one of the night’s highlight lines.

Next was Decay by first-year drama major Michelle Li. In her description, Li characterizes her collection through the phases of decay the moon experiences. Her collection was earthy and exciting — the first piece was accompanied by antlers. It was a very cool collection, incorporating a lot of late-fall colors and a bomb soundtrack. There were many notable pieces, but the one that I remember best was a huge, fluffy, folded leaf- looking garment which looked at once soft and brittle. Li’s was a very interesting concept, which was executed flawlessly.

Crest, by senior industrial design major Sophie Parrinello, was described as “free-spirited and easy going.” I think that’s a pretty apt description. The fabrics incorporated “traditional Japanese shibori indigo dy[e]ing” techniques, which resulted in a very interesting set of fabrics, which was used all throughout the line. This was the most cohesive line in terms of fabric choices — the indigo fabric and yellow undertones made up each garment — and I’m not sure if that was detrimental or beneficial to this collection as a whole.

Up next was Corpus by junior design major Rachel Chang and junior science and arts major Christine Shen, described as an exploration of “the conflict between vulnerability and protection in human relationships.” Personally, this was one of my least favorite lines. It tried to incorporate some fringy accents and some plastics and whites and beiges, but the overall effect gave me baby’s-first-Halloween-cowboy-costume. It wasn’t quite a success, but I did appreciate some of what they tried to do — the diagonal slit up one of the skirts, for one.

Next was Fukkatsu by sophomore art major Cindy Hsu and sophomore communication design major Sharon Yu. Fukkatsu “means revival in Japanese,” and this collection was pretty lively. With some stunning patterns, the pieces seemed to flow and swim together alongside the Koi fish pictured on nearly each garment. This collection played with geometries and strictness — ranging from sharp shoulder pad wings to slouchy hoods — and I quite enjoyed it.

Exuviae, by senior architecture majors Noopur Suckhlecha, Jenny Wong, and Marnfah Kanjanavanit
was an experience. This was hands-down tied for my favorite collection, and let me tell you why: exoskeletons. “Exuviae are the empty exoskeleton remains...after a skin-shedding process.” This collection featured beautifully crafted plastic accessories which made the relatively simply blue pieces come alive. From a beautiful and realistic spinal cord to some clipped wings, this collection stood out as not only one of the best concepts, but also a great experience. The spinal cord, modeled by model coordinator and fine arts senior, Alex Walker, was the only real reveal of the show; he strutted down the runway and turned around, and I swear, the front row just gasped.

Up next was Erode by sophomore mechanical engineering major Jonathan Lopez, junior design major Zai Aliyu, and sophomore art major Kate Werth. This collection “explores continually changing environments ... through the use of black, white, and an organically manipulated grid structure.” For me, this is a collection that could have benefited from a different order. I think that there was some potential here for a clearer narrative to be told, but I didn’t quite see it in action. Most of the pieces had some bits cut out, in varying depths and revealing various shades of black/gray, and a more coherent sequence might have made this collection stand out more.

Last, but certainly not least, was Sanctum by senior decision science major Sasha Kerbel and senior humanities and arts major Madalyn Gryger. This collection “explores the experience of living with mental illness.” It. was. amazing. Absolutely grand. The soundtrack was completely mood-setting and terrifying, and the second this collection hit the runway, all eyes were glued. This collection featured some intricate beadwork, and nearly all of the models were wearing masks, some more aggressive than others. The first model wore a ripped leather bodysuit and a leather head covering with a ripped cut-out a la Hannibal Lecter. Another model wore a pretty masquerade mask, which I thought was very fitting for the concept, and still another wore a wire mesh face covering, which looked horribly painful. This collection was tied with Exuviae, in my opinion, for overall best collection.

And there you have it! The 20th anniversary of Lunar Gala was quite an experience, and it serves as a stylish reminder of the power of our student community here at Carnegie Mellon.