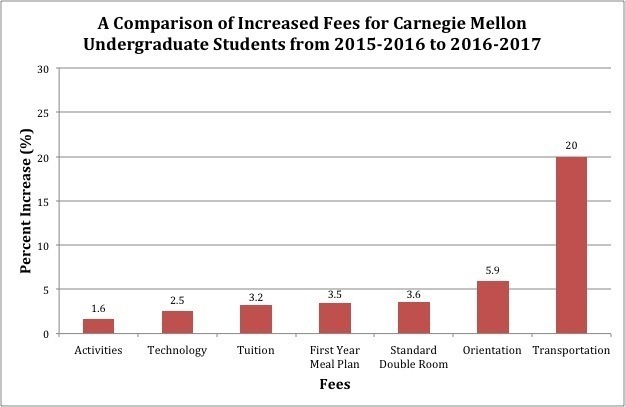 Earlier in the semester, the Carnegie Mellon community was notified that there would be a 3.2 percent tuition increase for students, which would take effect for the 2016-2017 academic year. Upon further inspection, many noticed that the separate fees that contribute to the total cost of tuition varied in how much their prices increased. The most notable disparity was the drastic increase in the transportation fee, which will spike from its current standing at $150 to $180, totaling to a 20 percent jump. In response to concerns and questions posed by the Carnegie Mellon community, The Tartan sat down with Gregory Billy, director of campus services and director of risk services, and Michelle Porter, director of parking and transportation services, to understand the cause of the transportation fee increase.

In order to understand the factors that resulted in the 2016-2017 transportation fee increase, it is important to understand exactly what this fee covers. Billy broke down the factors contributing to this fee by noting that 2.4 percent of the fee is directed towards all the campus shuttles, with the exceptions of Bakery Square, while another 0.6 percent is directed towards the administrative cost of managing transportation. Unsurprisingly, the remaining 97 percent of this money is directed towards the Port Authority of Allegheny County bus services that carry students all around the Pittsburgh area.

In 2012, however, Carnegie Mellon University entered into a new contract with the Port Authority of Allegheny County, with the awareness that there would be two major changes. “At that time, it was known that Port Authority would increase rates and also switch to this new technology,” Billy said. This “new technology” referred to the card tapping system that allows students to tap their ID card to ride the bus, a major change from the clickers that were previously used by the bus drivers. The efficiency of this new technology led to more precision when taking into account just how many Carnegie Mellon students were taking advantage of the bus services. As it turned out, the previous method used by Port Authority bus drivers actually under-counted the number of Carnegie Mellon students that rode the bus and exactly how much the average student would use the bus services per year. According to Billy, information gathered from this new system concluded that “the average student rides the bus 135 times a year,” which showed “40 percent more ridership than had been projected” when compared to the old system.

The precision of the new card-tapping technology also led to more precision in the amount of money that Carnegie Mellon would pay to allow students to use the Port Authority bus services. Instead of paying a flat rate to Port Authority, which had been implemented in the old contract, the 2012 agreement between the university and Port Authority stated that the university would pay half of the normal bus fare for students. The regular bus fare for Port Authority is $2.50, but with the aid of the university, students would only have to pay $1.25 per ride. Taking into account that the average student rides the bus about 135 times a year, this number times $1.25 resulted in the final transportation fee price of $180 that was announced earlier in the semester. It should be noted that the price of $180 should be compared to the $338 that students would have to pay without aid from the university.

So what can students take away from this information? It is important for students to be aware that taking advantage of the Port Authority bus services is not free, as we usually like to think of it. Despite the ease of access that comes with simply tapping your card to ride the bus, there is actually a fee associated with the number of rides students take, and this price does eventually make its way back to students through the university’s transportation fee based on the data collected from the previous year.

As a potential solution to this issue, Billy suggested that students only use the bus when necessary, if they’re concerned about the jump in price. “If you’re just taking a short ride, like down Beeler Street, and it’s safe to walk and a nice day, you’re helping everyone to walk a block or two,” Billy said. As another example, Michelle Porter noted that the distance from Hamburg Hall to Morewood Avenue is a short enough distance for students to choose walking over the bus. This advice, however, should be taken with students’ safety in mind. “Sometimes it’s a safety issue. If it’s 2 o’clock In the morning and you’re walking up Beeler, for example, take the bus if it seems like the thing to do,” Billy said.

For those that were shocked by the drastic increase in the transportation fee for the upcoming academic year, maybe this newly acquired information will allow students to be more reflective in just how much their actions make their way back to their tuition costs.