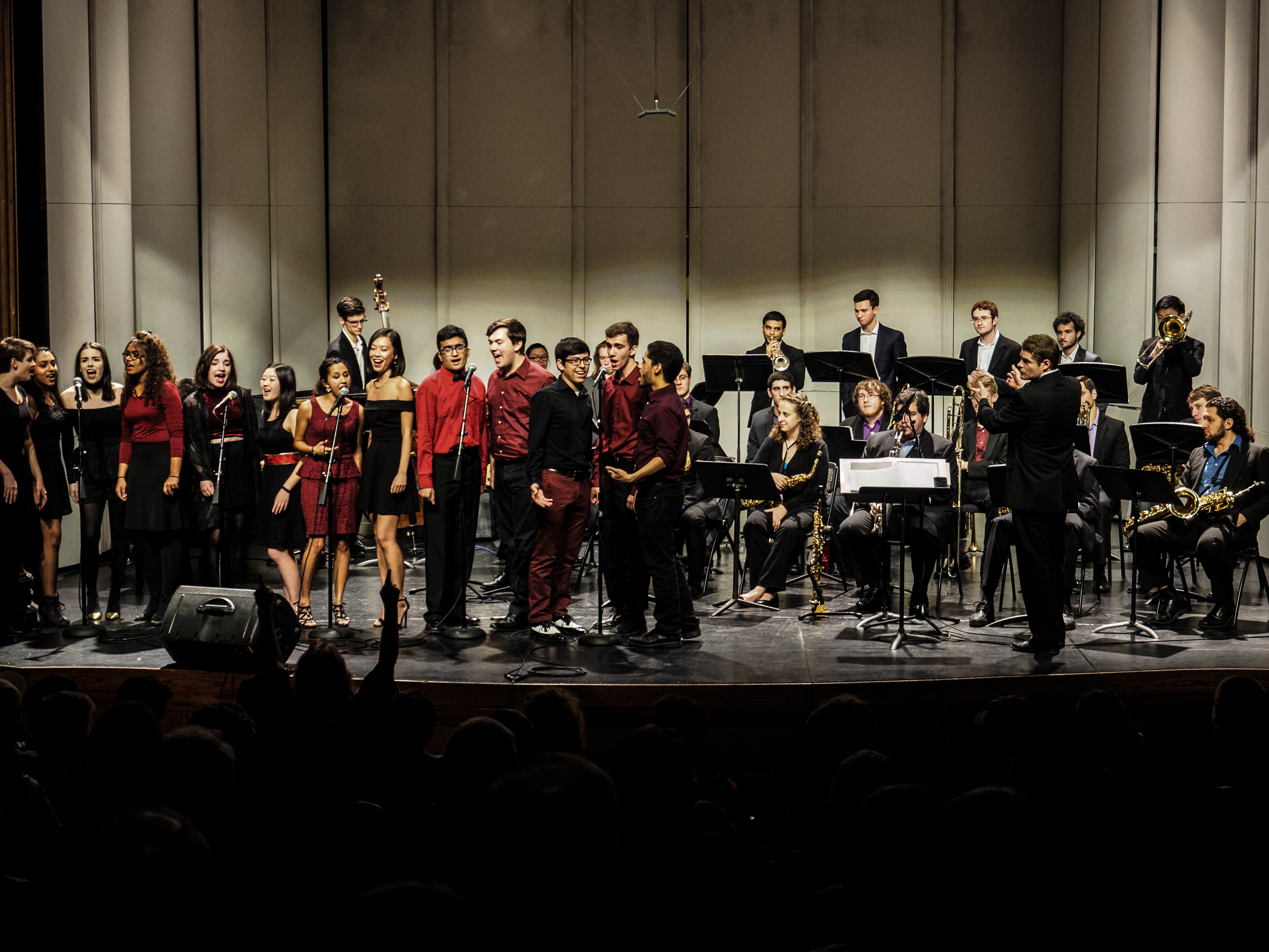 This past Thursday, Nov. 17, the Carnegie Mellon University Jazz Ensembles hosted their fall concert in Kresge Theatre. The concert was packed, with audience members spilling into the theater even during the first few pieces. Even arriving 15 minutes early, I was unable to obtain a program.

The Carnegie Mellon University Jazz Orchestra started promptly at 7:59 p.m. with Oliver Nelson’s 1962 “Miss Fine,” a smooth, chill swing song. “Miss Fine” was one of Nelson’s first big band songs, with big band referring to a large music ensemble with saxophones, trumpets, trombones, and a rhythm section derived from the Swing era in the 1920s. In contrast to smaller jazz ensembles, where improvisation is featured, big band is often more about intricacy and organization.

Eric DeFade, a jazz saxophonist who is a two-time Grammy-award winner for performances on Nancy Wilson's jazz albums, is the current director of the Jazz Orchestra. In the true jazz concert fashion, DeFade only occasionally conducted the ensemble, instead clapping in time to get them on the same tempo and carrying conversations with ensemble members during pieces.

Next up was John Coltrane’s 1959 “Naima.” This slower ballad, featuring a sax solo and piano solo, had many rich chords underlying the melody.

Switching it up a bit, DeFade invited Natasha Patamapongs to the stage to sing Clifford Brown’s “Joy Spring.”

Patamapongs earned her BHA at Carnegie Mellon with a dual-major in International Relations and Music Technology and is currently a master’s student in Entertainment Industry Management at Carnegie Mellon’s Heinz College. As a professional jazz singer, she brought cool dynamics and runs to the piece, utilizing the microphone to throw her voice away.

After her performance, DeFade commented, “It’s always nice when someone sings of spring this time of year.”

The last song of the Jazz Orchestra’s first set was Maynard Ferguson’s “Superbone meets that bad man,” featuring the entire trombone section. A superbone itself is a hybrid trombone.

The CMU Jazz Improvisation Vocal Ensemble (J.I.V.E.), directed by Betsy Lawrence, came on stage in their black and red color-coordinated dress to perform. The instrumentalists accompanied the singers from behind, with DeFade directing the Orchestra as Lawrence directed the singers.

This eclectic set was designed to expose the performers, both the singers and the instrumentalists, to as many styles of jazz as possible before going into the industry.

To transition from J.I.V.E. back to the Jazz Orchestra’s second set, they performed Irving Berlin’s “Blue Skies,” featuring Marina Byrne, a sophomore Vocal major, who brought a rich tone to the song.

The Jazz Orchestra started their second set with Thad Jones’ “To You,” continuing the style of big band, with slow, warm, cluster chords.

Next up was Joey Calderazzo’s “Midnight Voyage,” featuring the saxophone section. This piece was my personal favorite of the night because of an amazing saxophone solo performed by music master’s student Joseph Scheller.

They wrapped up the concert with Dizzy Gillespie’s “Manteca,” which had a nice Latin vibe, featuring solos from every section.

Overall, the concert was very diverse in terms of the jazz genres that were explored, and you should definitely go to their concerts next semester!