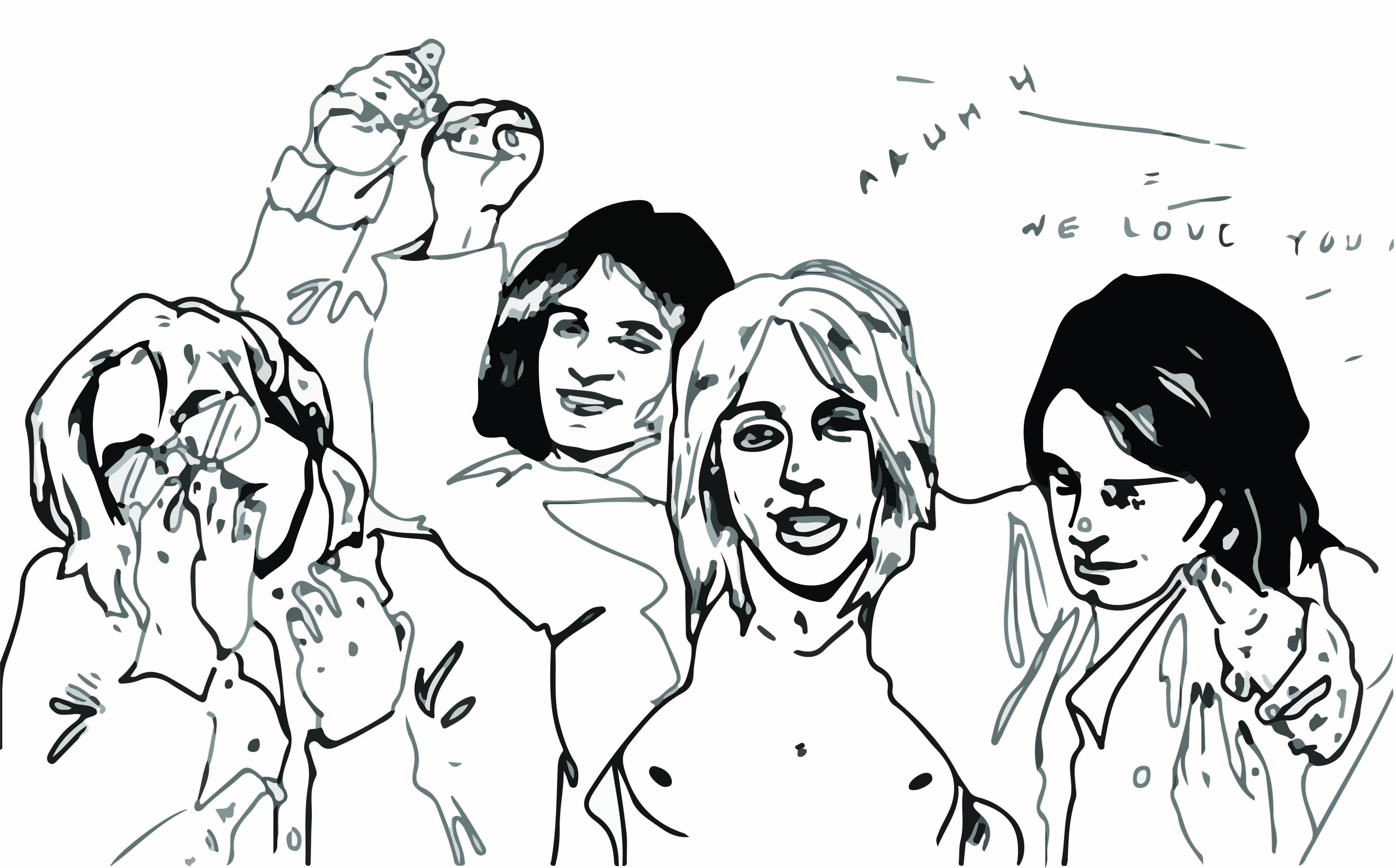 Gimme Danger is a new documentary from Jim Jarmusch, director of Only Lovers Left Alive (2013) and Coffee and Cigarettes (2003) among others, currently in limited release across the country, shown in Pittsburgh by Pittsburgh Filmmakers. The film is a retrospective on the band, The Stooges.

I felt pretty bleak before going to see Gimme Danger. To be honest with you, I’m still floating in a surreal headspace. A week ago, I was a news junkie, but this week I’m having a pretty difficult time engaging with reality. On top of that, the evening I saw this film, the sky was grey, the thanks-to-daylight-savings darkness was already taking over, and the cold was making itself known. Maybe not the best of circumstances to see a documentary about a band I knew next to nothing about. But I did know the director, Jim Jarmusch, and knowing his punk rock oddball sensibilities and humor gave me motivation.

Now, I won’t say that Gimme Danger made me feel better. But it made me feel different, in a meaningful way. Jim Jarmusch’s film is a stage dive into the truest realms of creativity, authenticity, and insanity. I’m more than willing to go there for a while.

In the film, Jarmusch describes the Stooges as the greatest rock ’n’ roll band ever, though their lead singer Iggy Pop denies genre on principle, preferring to “just be”. In the course of five or six minutes, Gimme Danger describes a band who, in the course of a few years, released a few albums, performed loudly and sporadically, and imploded shortly after in notably messy fashion. And then the opening titles appear.

It quickly becomes evident why Jarmusch is taken enough with Iggy and The Stooges that he felt compelled to make this film. They share the same sense of oddball humor, barely acknowledging that their work is so glaringly unconventional, driven purely and religiously to create art that is exciting and righteous to them. Gimme Danger is composed in such a way that you are often shaken by the images in front of you (hazes of intoxication, crowd surfing, peanut butter), overlaid two or three times, flashing in breakneck montages to the cacophony of live recordings. There is hilarity, obnoxiousness, and reckless energy. It may be the filmic equivalent of a Stooges concert.

Early in the film, Iggy Pop describes his basic songwriting skills with candor, contrasting his twenty-five-different-words-or-less approach with the lyrical prowess of Bob Dylan (“blah, blah, blah,” says Iggy). And it seems to me that Jarmusch aims for the same target with Gimme Danger, preferring to convey the ecstasy of artistic conception rather than communicate truth in a manner more complicated or overthought. The film observes the young band exploring and experimenting with all forms of noise, challenging ideas about where music can originate as well as what is acceptable in performance. At one point, Iggy dons a dog collar, just because it seems to fit his style.

I’m struck in a large way by the zen of The Stooges. Granted, they were nuts, addled by drugs in starts and stops, faced off with violent exchanges mid-performance. But that’s all part of it. Creatively, they persevered when confronted with both indifference and outright hatred; and the way they persevered, with simple self-affirmation and sheer independence, is what is most inspiring. There’s almost a nonchalance in Iggy Pop, a confidence that they would not have existed any other way.

A memorable moment in the film comes when Iggy describes the appropriation of rock by corporate America — how many of the groups we associate with 1960s music were formulated in board rooms, men in suits solving equations, birthing inauthentic white bread groups to create harmless sound that placated the masses and sold records. These numbers — men cobbled together bland half-ideas and pretended that’s what the people wanted. This is the moment in the film that nailed down The Stooges’ importance for me.

Gimme Danger is a caffeinated, joyous middle finger to people in power demanding that you sit down and buy what they’re selling. It celebrates a group of midwestern kids who, through acts of simple, undaunted, artistic bravery, decided for themselves and generations to come that “cool” is what you want it to be. And, in a strange way, that’s downright life affirming.

I’m sad and angry today, and I will continue to be for awhile. But, let me tell you, when I was in the basement theater bathroom after the film, listening to two old guys ranting and criticizing our next president, I smiled. It felt pretty punk rock.