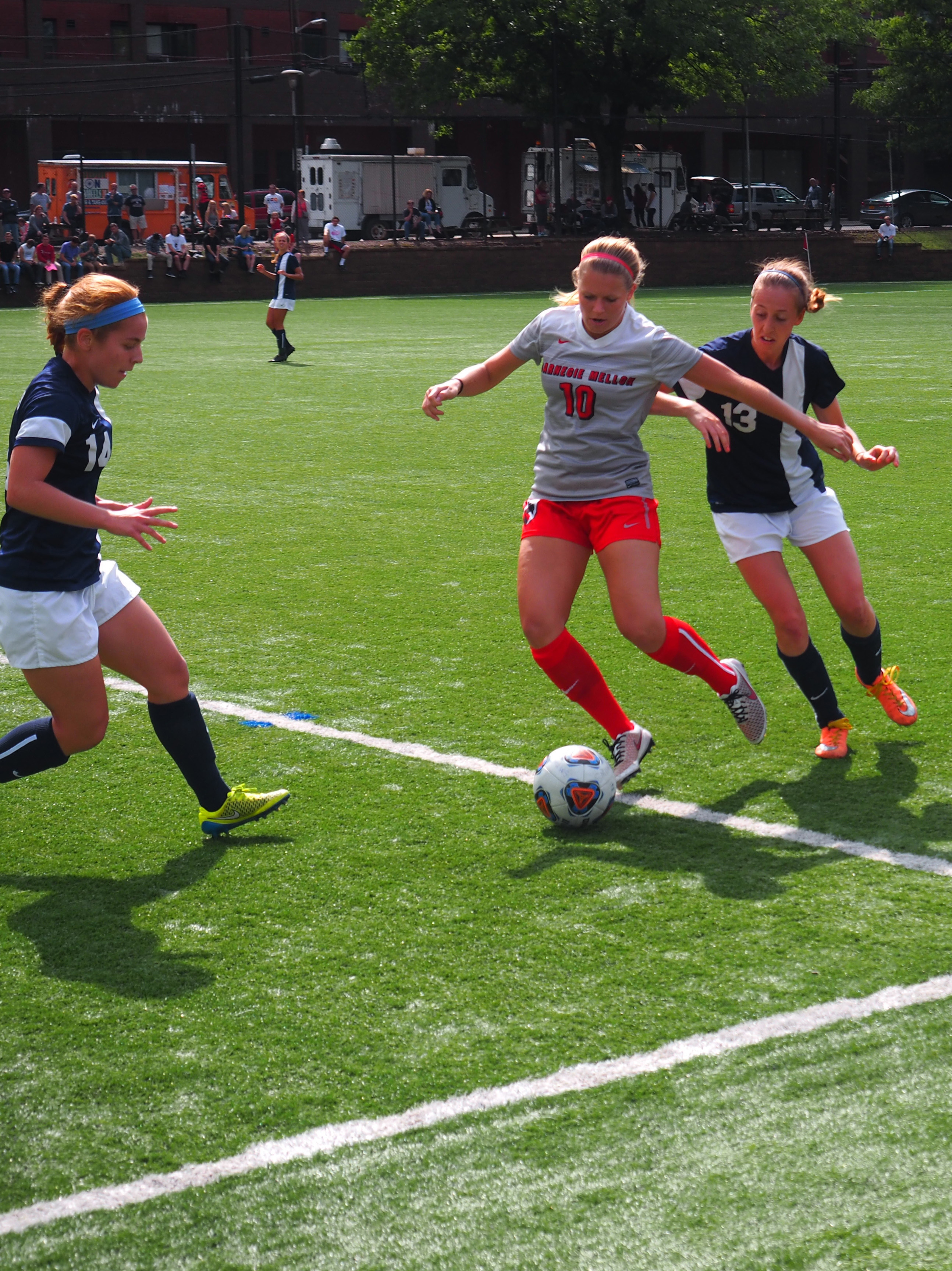 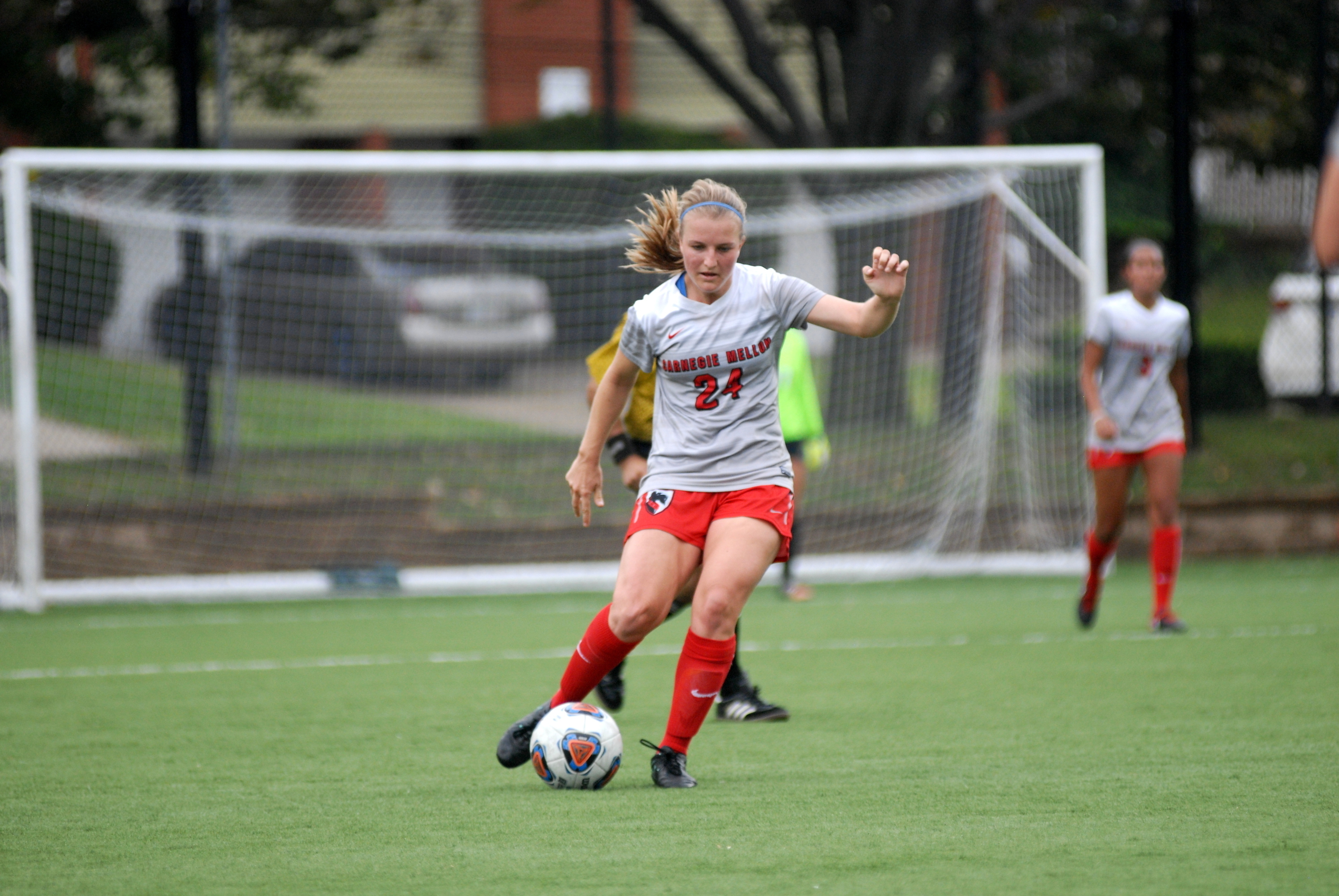 Junior midfielder Morgan Kontor dribbles her way down the field in the Tartans’ 0-2 loss to Brandeis on Saturday. (credit: Mark Egge/) 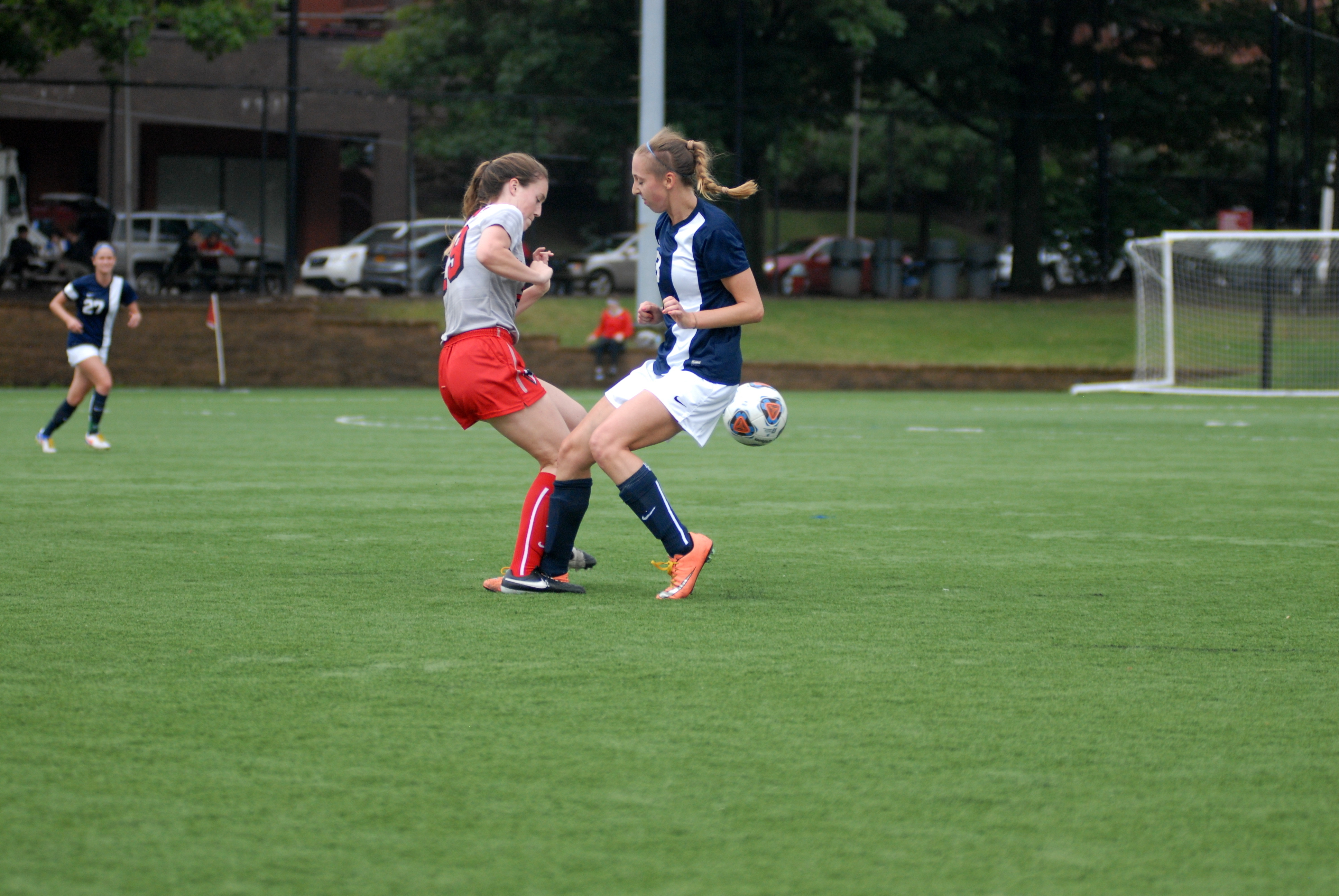 First-year Tara Durstewitz battles a defender for the ball in the Tartan’s conference loss to Brandeis on Saturday. (credit: Mark Egge/)

The Carnegie Mellon women’s soccer team took the field on Saturday against the 10th ranked Brandeis University Judges. The Tartans fought a tough battle but ended falling 2–0, putting their record at 6–3–1 on the season.

The game got off to a rough start for the Tartans. Halfway through the first minute, Tartan goalkeeper Mia Keyser attempted to pass the ball to one of her teammates but an opposing player intercepted it. The Brandeis player then sent the ball immediately over Keyser’s head and the Judges suddenly had a one score lead just as fast as the game had started.

The Tartans did not give up though. They continued to play aggressively and even got a chance to score in the ninth minute. Senior midfielder Delaney Lam made a shot but it was saved by the Brandeis goalkeeper. The Tartans were consistent in the offensive attack but could never manage to finish the job. Sophomore forward Kaily Bruch had back-to-back unsuccessful shot attempts in the 33rd minute and the Brandeis defense looked to be unbreakable. The Tartans tried their best to make something happen but couldn’t find any momentum.

The Judges finally put the nail in the coffin when they went on an offensive attack. A Brandies player sent the ball across the net to a teammate, who took the shot but it was knocked away by Keyser. Another Brandeis player collected the rebound and sent ball to the back of the net, putting the Judges up 2–0.

The Tartans never managed to find a way back into the game. Despite a couple close shots on goal in the second half, the Tartans found themselves unable to create any tangible offensive production, which is not usually the case.

If the Tartans want to win games in the future, they’ll need to be able to put points on the scoreboard. They had plenty of chances in this match, but couldn’t capitalize on any of them. This was only the first University Athletic Association (UAA) competition for the Tartans, so they’ll have plenty of time to bounce back in future games.

Even though they lost by two scores, the Tartans should be proud of the things they did right in this game. That said, they’ll also need to pinpoint their mistakes if they want to beat higher-ranked teams like Brandeis in the future.

The Tartans will travel to New York University for their next match on Saturday, Oct. 8. The game is scheduled to start at 11 a.m.