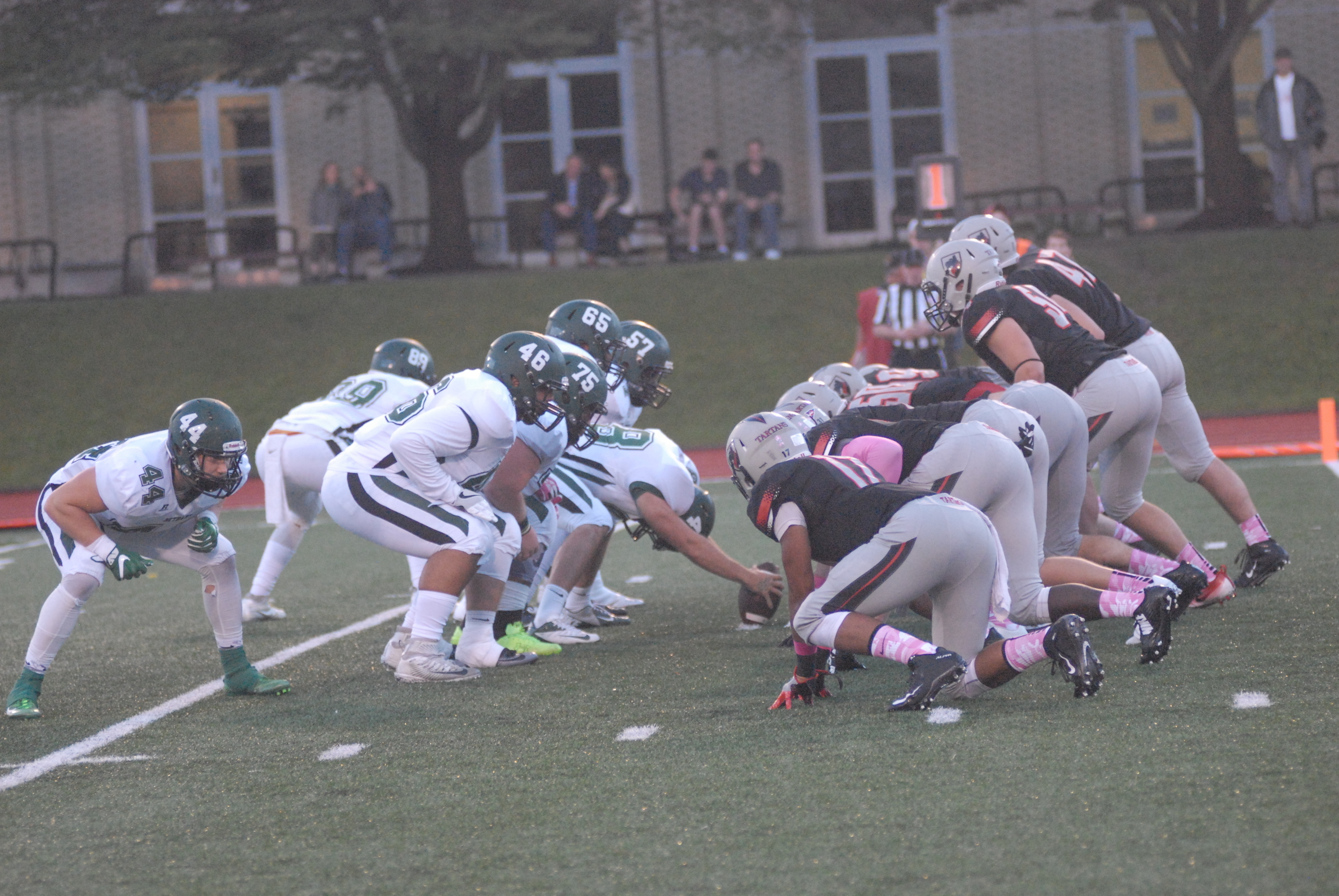 The Tartan defense lines up near the goal line to try and block a field goal attempt by Bethany in Saturday’s game. (credit: Zichen Liu/) 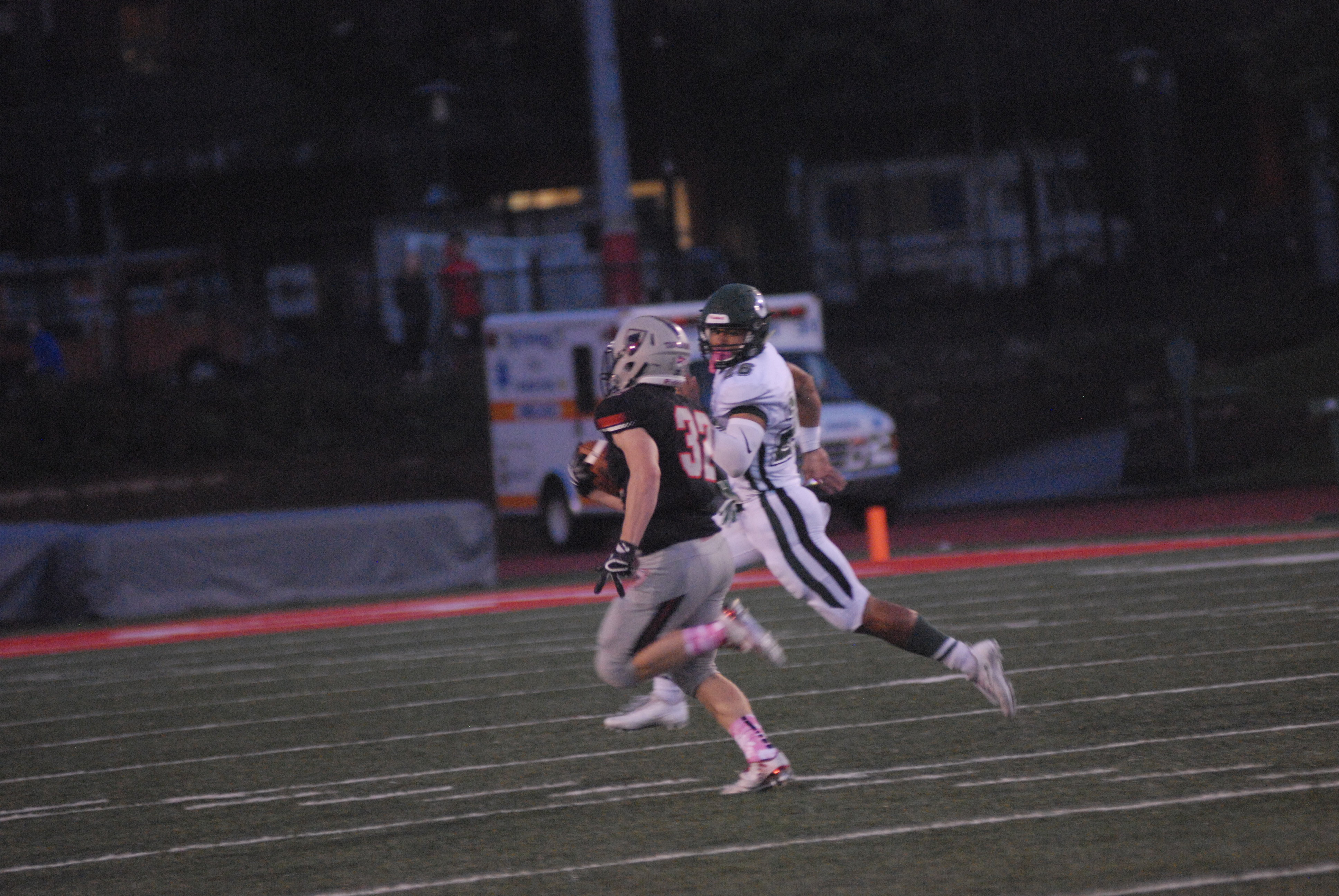 The Carnegie Mellon football team took on Bethany College on Saturday. The Tartans defeated the Bison 49–26, taking their overall record to 2–2 and their Presidents’ Athletic Conference (PAC) record to 2–1.

The Bison started off with a long touchdown run that was called back due to a penalty. Junior outside linebacker Kyle Brittain recovered a fumble off a passing play, giving the Tartans the ball in Bethany’s territory. Junior quarterback Bryan Jangro returned to the field for the first time since his injury against Waynesburg two weeks ago. Junior wide receiver Alex Froimzon caught a ball deep around the goal line, and junior running back Sam Benger eventually punched it in, giving the Tartans a 7–0 lead.

Bethany called up quite a few running plays, advancing to the Tartans’ side of the field. After getting into the red zone, the Tartans managed a heavy hit that forced a fumble, though Bethany was able to recover the ball. As Bethany approached the goal line, a lightning delay paused the game for 30 minutes. The Bison came out with a running play to the right that scored a touchdown but was called back due to a holding call. A few plays later, Bethany finally completed a touchdown pass to their tight end, tying up the score 7–7.

First-year running back William Richter returned the ensuing kickoff to their 45-yard line. Benger ran the ball to the Bison side of the field. A great pass to junior wide receiver John Prather allowed him to get in position to get the ball to the goal line, and Benger brought it in a few plays later, putting the Tartans up 14–7.

The next drive saw the Tartan defense put a stop to the Bison offense, shutting down an outside run on first down and taking down a quarterback draw two plays later. Richter returned the ensuing punt to the Bison 36-yard line before the opposing punter managed to take him down. Jangro on the next play passed deep to Prather, connecting for a touchdown that put the Tartans up 21–7. Bethany started their next drive near midfield and quickly got a deep completion, scoring a touchdown but missing the extra point that took the score to 21–13. Richter took the ensuing kickoff past midfield to end the first quarter.

In the second quarter, Benger took off for 49 yards to score a touchdown that put the Tartans up 28–13. Bethany attempted to even up the score quickly, but the Tartan defense was able to stop them in their tracks. The Tartan offense was pinned within their 20-yard line, and Jangro was unable to make a deep pass to junior wide receiver Tommy Mansfield due to the pressure of Bethany’s defense. On the next drive, Bethany was able to move the ball near midfield before the Tartan defense shut them down. The Tartan offense went three and out, but the Bison returned muffed the punt, allowing senior cornerback Jonathan Dyer to recover the ball in the red zone. A few plays later, Jangro completed a touchdown pass to Froimzon, putting the Tartans up 35–13.

The next drive for Bethany saw them march to the other side of the field before a long completion resulted in a touchdown pass that brought the score to 35–20. Sophomore running back Rory Hubbard returned the ball to the 48-yard line on the ensuing kickoff, but the Tartans were unable to do much more after a miscommunication on third down led to Jangro overthrowing his receiver. Junior punter and kicker Tyler Kohman pinned Bethany to their 5-yard line, forcing them to take a knee to end the half.

The next drive saw Prather haul in a pass that got the Tartans into Bison territory before Prather caught a 41-yard pass for a touchdown, putting the Tartans up 42–20. Junior inside linebacker Sean Graff intercepted the ball on Bethany’s next drive. On their next play, Benger took it to the house from 55 yards out, putting the Tartans ahead 49–20 before the end of the third quarter.

Despite the four score shortfall, Bethany came out swinging with a 33-yard run to start the fourth quarter. The Bison made it to the red zone, but the Tartans managed to stop them on fourth down. Sophomore quarterback Alex Cline took over on the next drive, but he threw an interception that was returned deep in Tartan territory. The Bison scored on the next play, bringing the score to 49–26 after Bethany missed the extra point.

Bethany attempted another onside kick, but the Tartans recovered it. The offense went three and out, but the Tartans forced one against the Bison. The Tartans once again went three and out without taking much time off the clock. The Bison tried to go for it on fourth and long, but the pass went incomplete. Junior quarterback Scot Beumel went in on the next drive, but spent his time handing the ball off to Richter. The Tartans brought the ball to the goal line before proceeding to run the clock out and end the game.

Both sides of the ball had their ups and downs during the game. The first quarter looked like the game would turn into a shootout before the Tartan defense finally began figuring out how to stop the Bison. Bethany’s defense eventually put a hold on the Tartan offense, but it was too late for the Bison offense to catch up.

Senior defensive end Brian Khoury recorded 2.5 sacks to tie the record for most career sacks in Tartan history. Richter and Kohman were both instrumental in special teams dominance. Jangro looked much better in this game than he did the first two weeks, and Benger was able to break through many times. The Tartans appear ready to take on any challenger.

The Tartans will next play at Washington and Jefferson University on Saturday, Sept. 8.