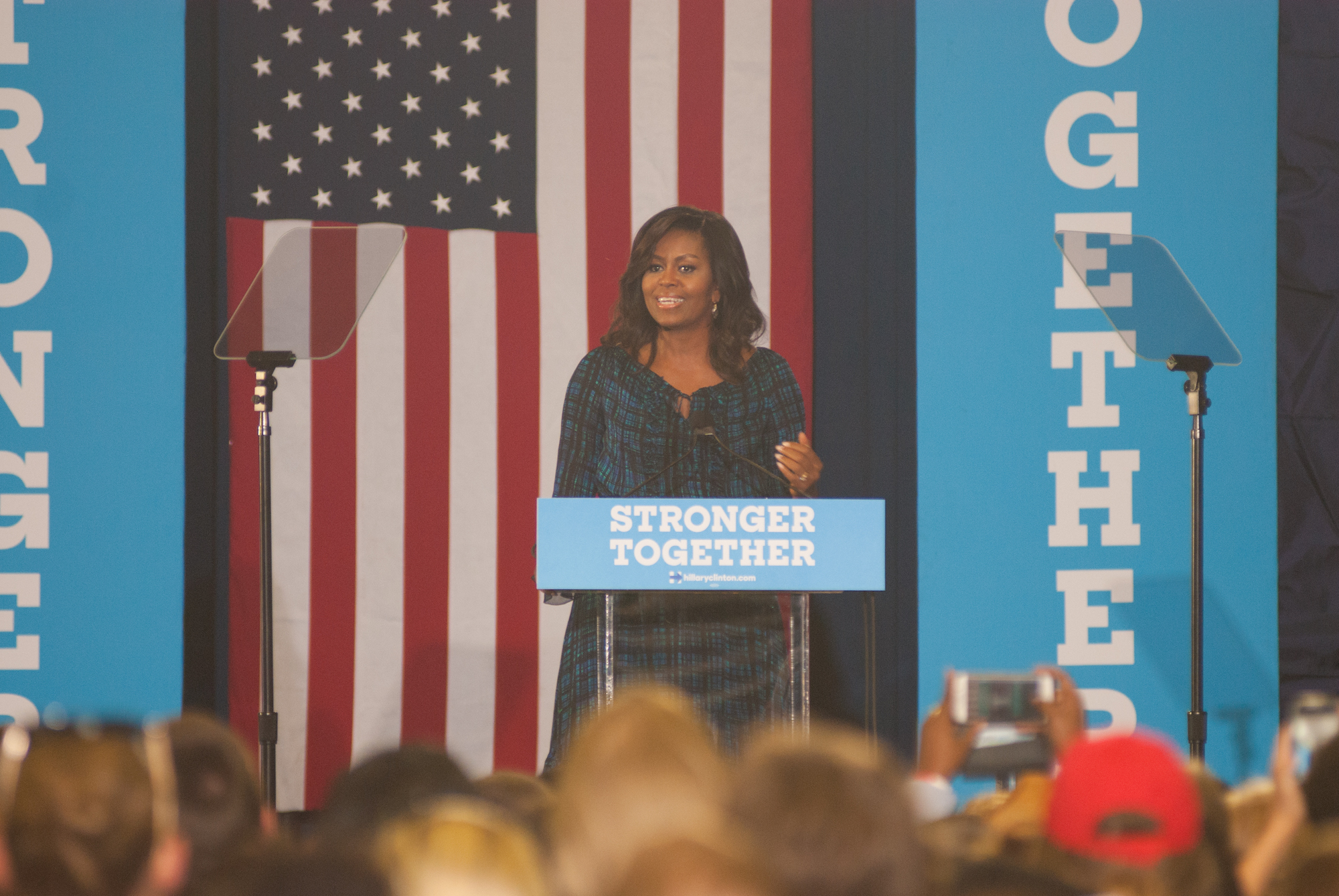 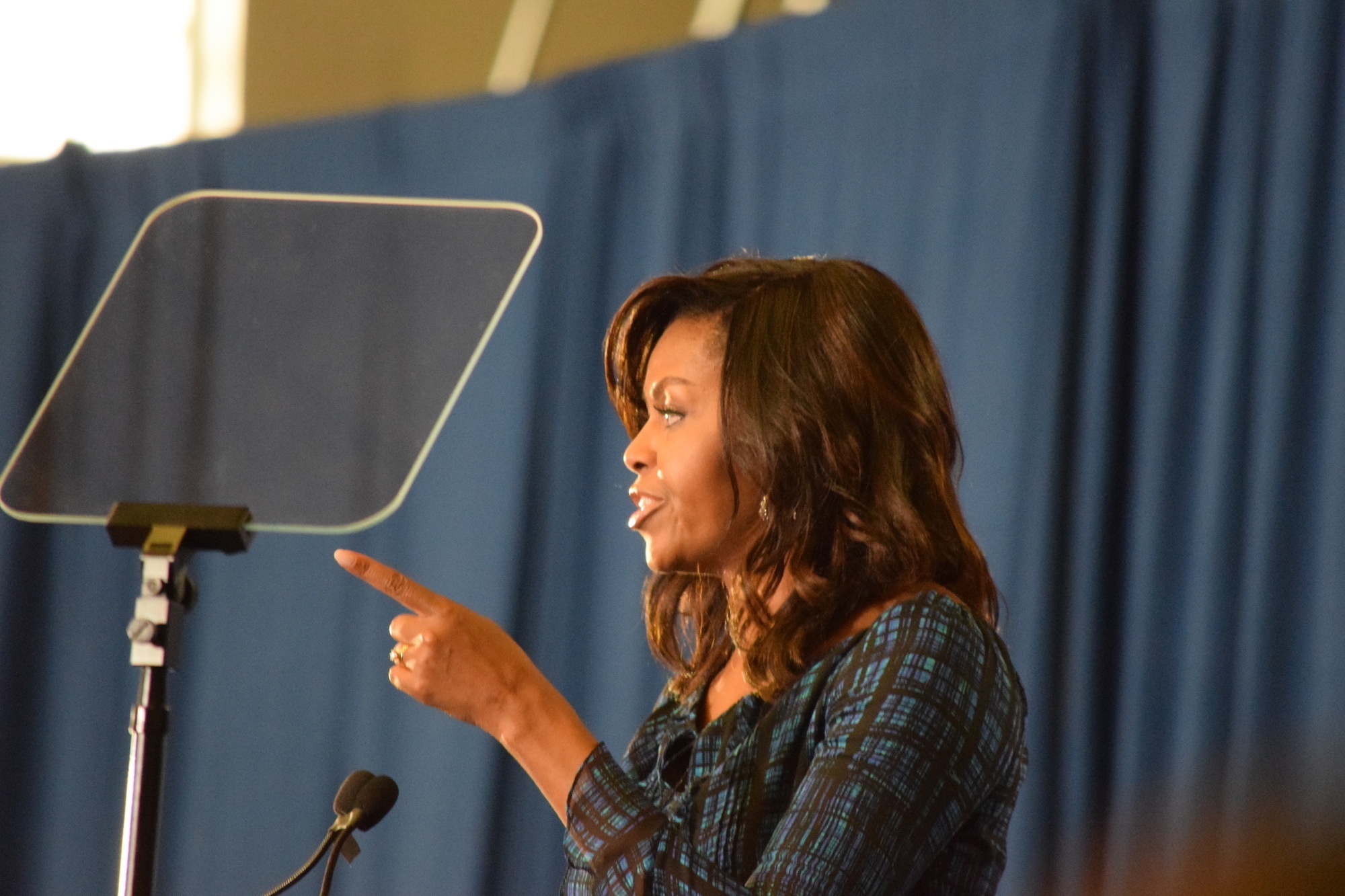 The event kicked off at 2:30 p.m. with rousing speeches from several Allegheny County notables.

First came Betsy Good, the Pennsylvania Campus organizer at the University of Pittsburgh who spoke about why she joined the Clinton campaign. Good described how after the 2008 recession, when her father was laid off, “working families like [hers] deserved more.” Now, her dad will be casting his first vote ever this November for Clinton.

Providing opportunity was a common theme through the afternoon. Allegheny County Executive Rich Fitzgerald spoke about how prior to the Obama presidency, the U.S. was losing 700,000 jobs a month. In response to the President being attacked in today’s media, Fitzgerald countered, “Barack Obama has kept America great.”

Most moving, however, was Councilman DeWitt Walton’s speech, which he opened with Langston Hughes’ poem “A Dream Defers.” Walton revealed that his maternal grandfather missed being a slave by just two years, following Lincoln’s Emancipation Proclamation. The African American community was able to progress under Kennedy, Carter, and Obama, and DeWitt stated that “if we do not want a dream deferred, we must elect Hillary Clinton.”

The First Lady came onto the stage at 3:45 p.m. after an introduction from the University of Pittsburgh’s band and Saket Rajprohat, a sophomore economics major and first generation American who also joined the Clinton campaign because of Clinton’s inclusive platform towards immigrants. Immediately upon taking the stage, The First Lady was met with loud applause from the audience attempting to document the moment. The elegance and confidence of the First Lady was apparent from just one look at the podium.

Michelle Obama began her speech by talking about the bittersweet transition out of the White House. There is “lots of uncertainty,” she said, a sentiment shared by most Americans. Throughout her speech, Michelle Obama never outright mentioned Clinton’s opponent Donald Trump by name, but very openly alluded to him several times. Both the President and Trump have publicly expressed disapproval of each other in the past. Michelle Obama spoke of “those who dared to question whether [her] husband was from the United States of America,” and tried very hard to “undermine [her] husband’s presidency.” She quoted her husband’s famous phrase, “I will go high when they take a low,” bringing cheers and applause from the crowd.

Like most opponents of Trump, Michelle Obama then commented on his demeanor in the public eye. She called out his often brash outbursts saying “we need a grownup in the White House” and “someone who will take the job seriously.” Such a critique is warranted to an extent, given that the president is under “the harshest light there really is.” Candidates must be able to hold their composure under pressure, because after all, the presidency is reserved for those who can make decisions under severe stress.

The rally then shifted to Hillary Clinton’s attributes. Michelle Obama pointed out Clinton’s extensive experience, her character and commitment to the country, her advocacy for kids with disabilities and quality childcare. And though she did not win the nomination in 2008, her approval rating skyrocketed as Secretary of State. As a testament to her stamina, Michelle Obama stated that Clinton “gets right back up” in the face of adversity. She also noted that only Clinton alone has visited 112 countries, negotiated a ceasefire and a peace agreement, and spent 11 hours testifying before Congressional Committees.

Commenting on the public’s vocal criticism of Hillary Clinton, The First Lady refuted, “when I hear folks saying they don’t feel inspired, I have to disagree.” Clinton’s persistence and consistency have been key points in the 2016 election. “No one in our lifetime has ever had as much experience and exposure to the presidency; no one, not Barack, not Bill, nobody, and yes, she just happens to be a woman” observed Michelle Obama as the crowd absolutely erupted in cheers. At the end of the day, experience, preparation, and temperament matter when electing our Commander in Chief.

This opportunity to vote for Clinton, as opposed to the alternative, rests primarily on whether someone can handle the opportunity to lead this country. Michelle Obama advised undecided voters to ask themselves which candidate is honestly the most qualified and speaks to the values we as Americans share. Like the common theme in the opening speeches, the First Lady also brought up the values of “inclusion, opportunity, and sacrifice.”

Finally, Michelle Obama noted that this election is not just about who votes, but who does not vote. In 2012, voters under the age of 30 provided a margin of victory for President Obama in 14 states. This year, like all elections, every vote matters. Michelle Obama revealed that “in 2012 Barack won Pennsylvania just by 300,000 votes.” This may seem like a lot, but it is only a difference of 17 percent of votes per precinct. So, if you are on the fence and questioning whether your vote matters, keep in mind that most elections are very close, and every vote counts.