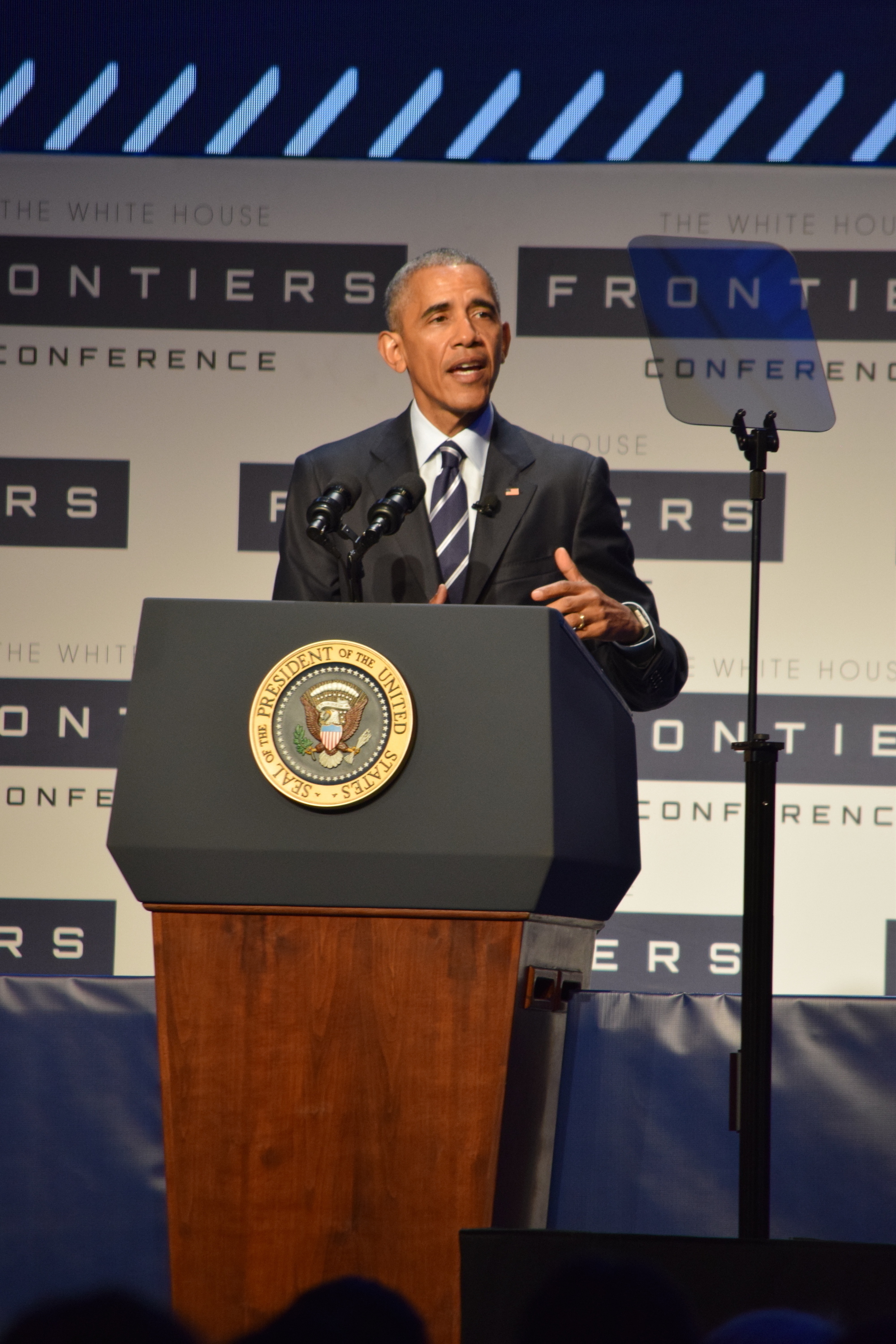 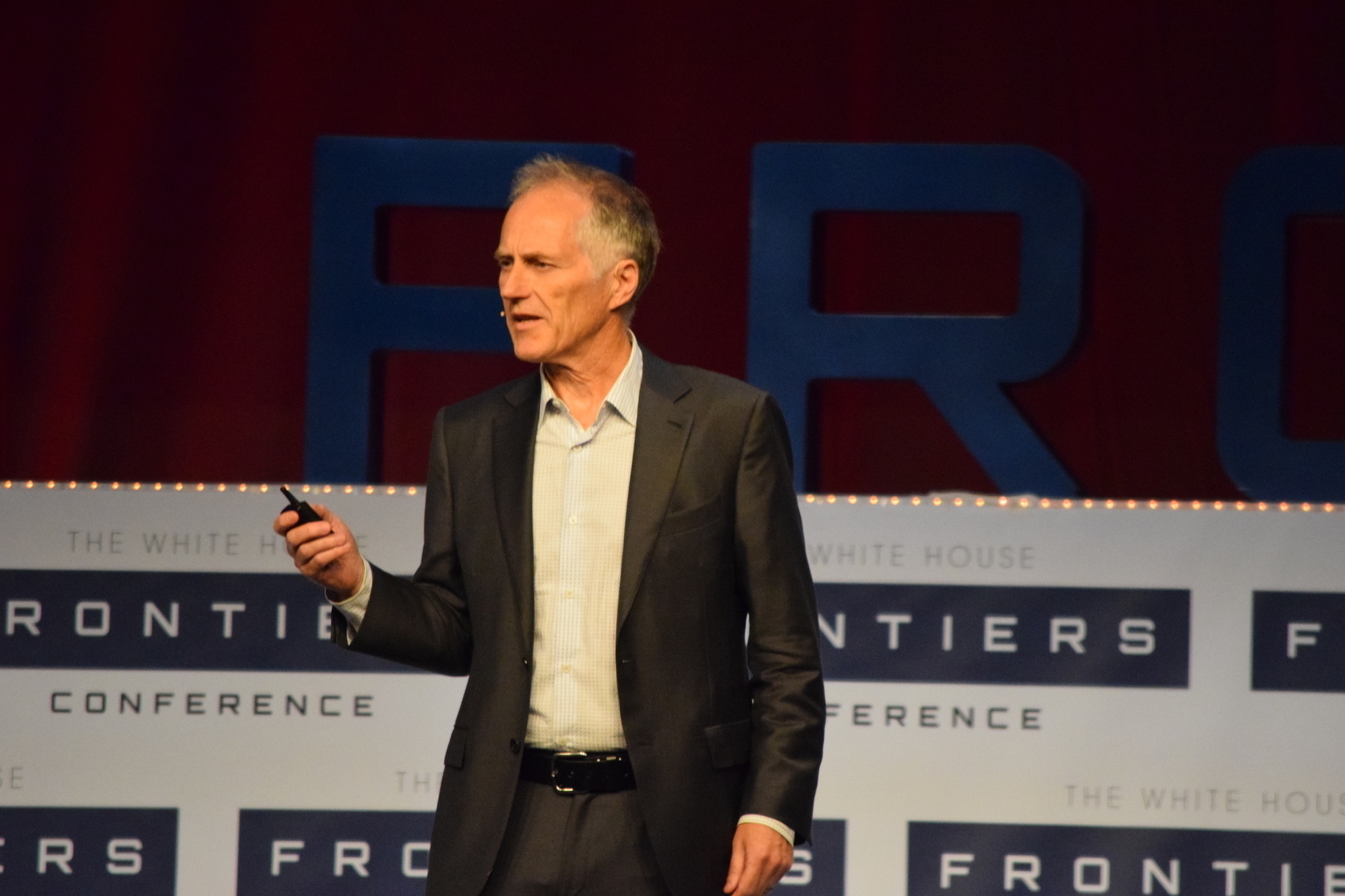 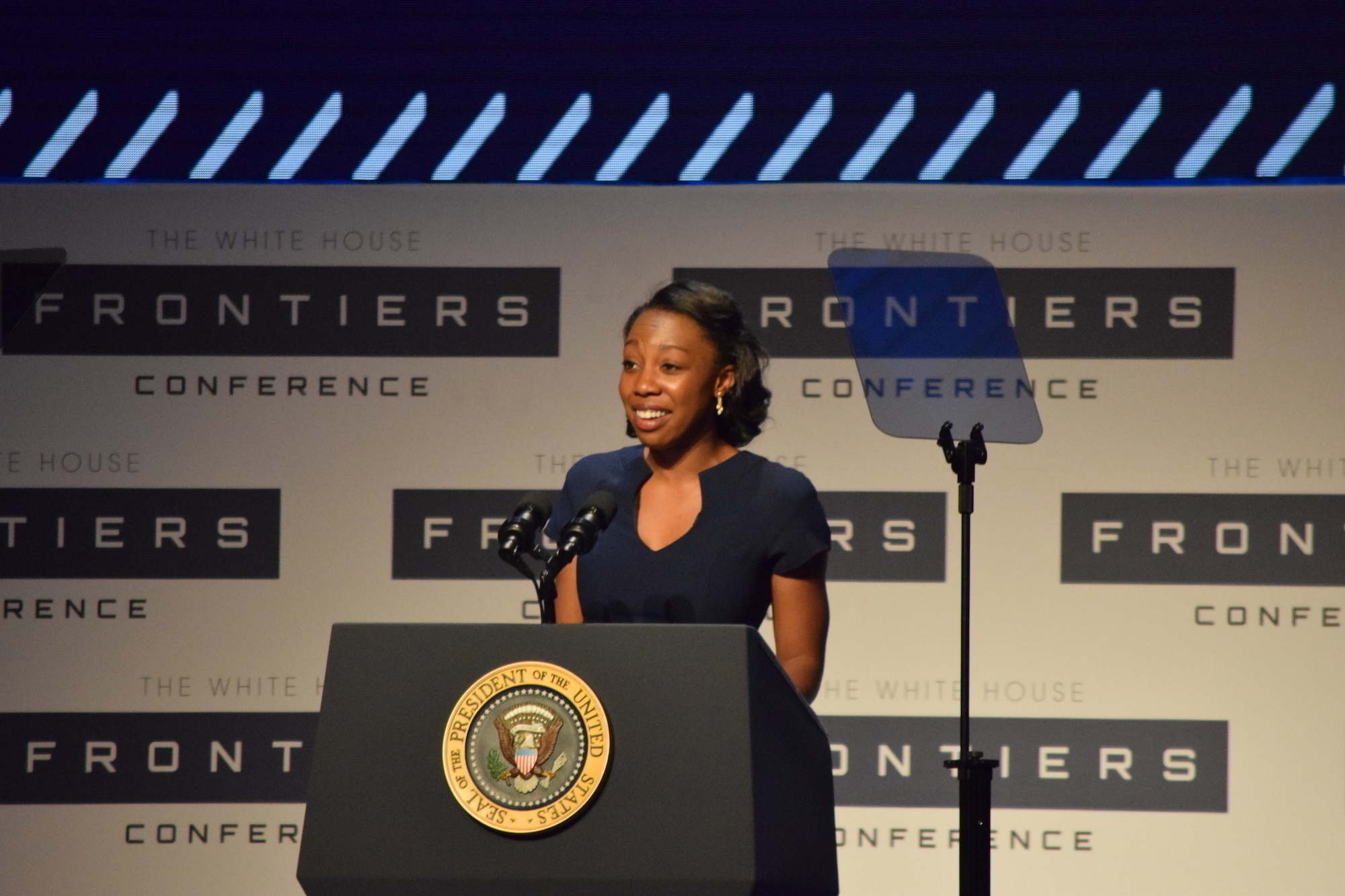 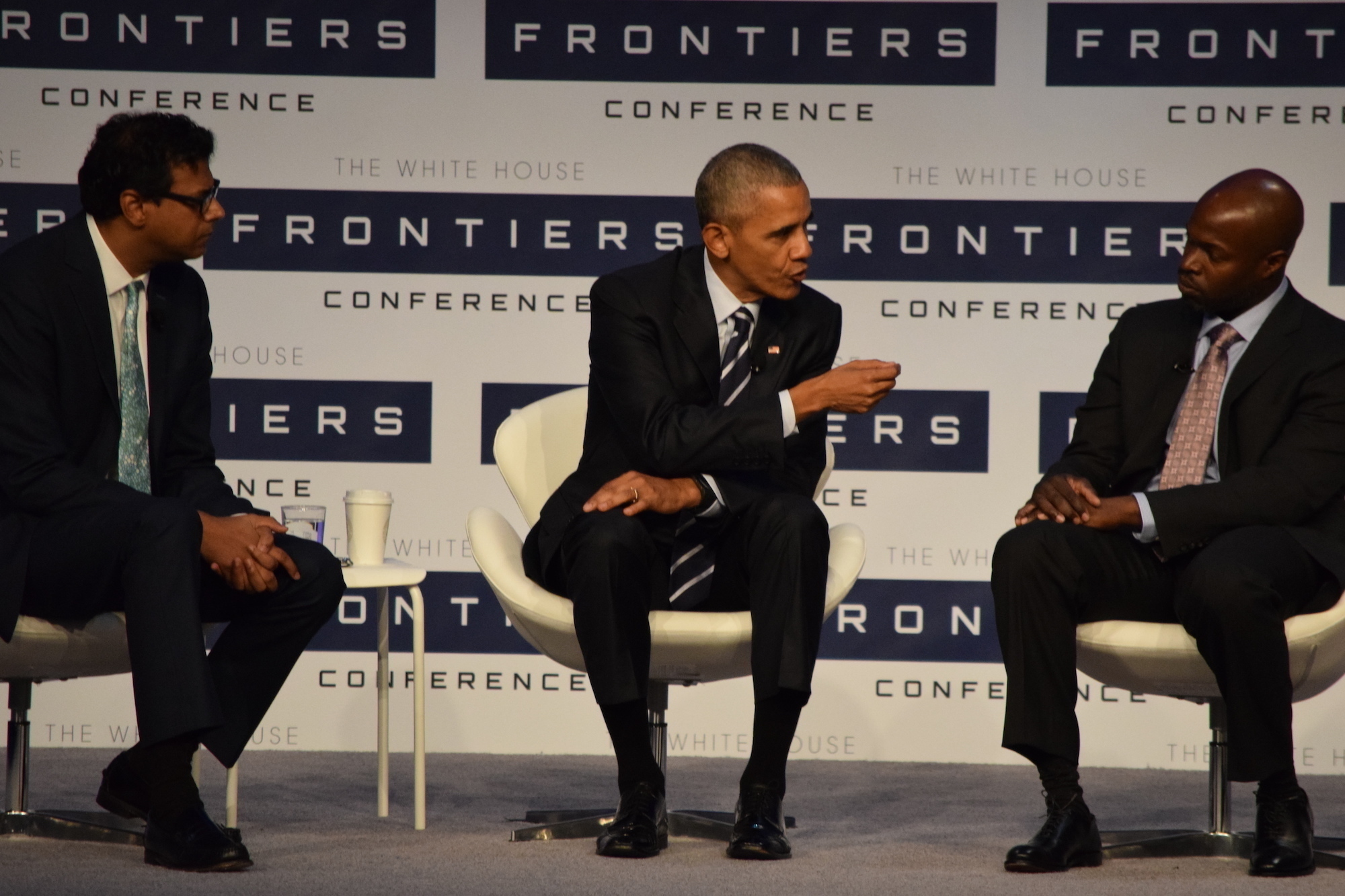 Earlier in the day, Carnegie Mellon also hosted three smaller conferences, or “tracks,” on interplanetary, local, and national frontiers of innovation. The plenary session, during which President Obama spoke, was the concluding event of the day.

Carnegie Mellon president Subra Suresh opened up the session by introducing the subject of technological innovation and the unique ability of Carnegie Mellon to work at the “intersection of technology and human behavior” in order to “enhance lives.” He also reflected on his personal connection with President Obama, referring to his previous post as the director of the National Science Foundation, and saying that it was an honor to welcome the president back to Carnegie Mellon.

Following Suresh was Tim O’Reilly, founder of O’Reilly Media, whose message was to consider the long-term benefits of progress, rather than short-term detriments. He talked about the budding era of technological advancements, reminding the audience that machine-destroying Luddites of the seventeenth century could never have imagined the benefits technology would ultimately bring society.

Next up was Raj Chetty, an economics professor from Stanford, speaking with radio show host Roman Mars. The professor described how statistics and technology was being implemented to analyze conditions of individuals and communities around the country. He provided insights into ways we can better deal issues like economic segregation and educational environments on the national level.

The youngest speaker of the event, Charles Orgbon III, encouraged adults to have the enthusiasm they felt as children. The engaging millennial spoke of the organization he founded in fifth grade, Greening Forward, through which he promotes improving environmental policy.

Subsequently, a panel featuring experts on space exploration was introduced. Anousheh Ansari, an Internet of Things company CEO, former astronaut NASA Deputy Administrator Dava Newman, and Blue Origin Manager Erika Wagner were the guests. Each offered a unique perspective on how they became interested in space, the final frontier. They offered their visions and prospects of what could soon become reality, and discussed what inspired them to turn towards space.

Finally, University of Pittsburgh and Carnegie Mellon medical student, Alexis Chidi took the stage to introduce the president. Chidi recounted her encounter with then-senator Barack Obama when she was sixteen and ran into him in the elevator. She mused about how their paths had crossed once again and welcomed the president onstage.

As the president walked on stage to the podium, he was greeted by a standing ovation from the crowd. His opening remarks were of thanks, to the several important decision-makers in attendance, as well as the leaders of both Carnegie Mellon University and the University of Pittsburgh.

The president then went into detail about some of the amazing things he had seen earlier in the day, such as a space shuttle designed by the private sector, and made a quip about successfully sticking a landing on the ISS, referring to a computer simulation.

Pittsburgh, he said, has “revitalized itself through technology,” going further to mention the advances of Uber self-driving technology, medical breakthroughs at the University of Pittsburgh Medical Center, and examples of progress, such as the “Girls of Steel” initiative, backed by Carnegie Mellon that allows young girls in the Pittsburgh area to learn about robotics. He noted that improvement of society through scientific advancement is consistent with the nation’s identity, and that “science has always been central to our progress.” He touched on green energy, medicine, smart city development, space exploration, and economics, as fields in which further progress needs to be made through innovation.

Several times throughout his speech, the president hinted that his emphasis on science and education was also a political issue. “We don’t just listen to science just when it fits our ideology” he said, speaking about the viewpoints of some political conservatives. He warned that denying scientific consensus such as climate change can have ramifications beyond making bad policy. Such positions, he says, undermine what has made America the global leader in science and technology that it is today. Such viewpoints lead to the loss in funding for research and development, which has given us some of the most important technology in the modern world.

The president mentioned his efforts to improve America’s standing in STEM fields. In particular, saying that it is critically important to make sure that education in these fields is accessible to all, and that American culture needs to adapt to place value on science and technology. His remark about the White House Science Fair sending the message that the “winner of the Super Bowl isn’t the only one that deserves a celebration in the east room” earned a round of applause from the audience.

President Obama pushed further on education, saying that we cannot have children with high potential “languishing in [substandard schools.]” Our duty, he said, is to make sure that advancements do not leave segments of society behind, and that progress is made in an equitable way. He said that part of his job as president is to make sure that the legacy from his administration is continued work in the field of science.

His final remarks were about his meeting a man named Nathan Copeland, and on the subject of brain research. Nathan Copeland had been paralyzed by a car accident, but was recently given new hope by a research team from the University of Pittsburgh. Part of a DARPA-sponsored initiative, the researchers implanted microelectrodes in his brain, which allowed him to control a robotic arm just by thinking about it. Nathan was able to shake the president’s hand and even give him a fist-bump. Additionally, “Nathan is the first person in human history who can feel with his prosthetic fingers.” The president said that the idea is to “push the bounds of what is possible,” making the point that people like Nathan are given new opportunities thanks to investments in science.
Finishing his speech, he joined the panel on Brain Science and Medical Information.

The panel was moderated by Atul Gawande, a surgeon and public health researcher who has written four award-winning books on the subject of medicine. In addition to the President, the panel included Kafui Dzirasa, a Neuroscientist working with Duke University, Data Scientist Riccardo Sabatini, who has worked in computational genetics, and cellist Zoe Keating.

Dzirasa wowed the audience by breaking down the dynamics of speech, demonstrating his cross-educational background in engineering and neurobiology. Next, he talked about his personal journey with studying the brain, saying that the schizophrenia that runs in his family is what first interested him in the subject. He said that the current brain research of the kind the President had spoken about earlier is a chance for engineers and scientists to get engaged in treating mental health and remove the stigma it so often entails.

Sabatini spoke on how his field has changed in the past few years. A trained physicist, Sabatini applied his knowledge to the field of data science. “The next century is going to be about biology,” he said, talking about his work with digitalizing the human genome. He explained how there is much that can be extracted by analyzing genetic data. Cancer and susceptibility to diseases can be ascertained by sifting through the genetic information.

Zoe Keating shared her personal experiences with medical information. Her husband was diagnosed with stage four lung cancer in 2014. When it was discovered, she said, the cancer had spread all over his body. Keating discussed the changes that need to be made to the system. “You wouldn’t believe what I had to do. I had to drive disks [to the hospital]” she said, describing the situation where medical information was not shared from hospital to hospital. She said she was encouraged by the advancements that have been made in medical data in the past few years, and commended the president on his efforts to alleviate the burden of paying for treatment through reforms like Obamacare.

The president followed this up by saying that his ultimate goal in medical research is to make sure that the research done by Dzirasa, Sabatini and others results in people like Zoe’s husband getting better treatment. One way in which that can be done, he said, is having a model for research where the data is spread more freely. A contemporary cancer researcher may have to rely on the data from one hospital or institution, but it is important to open up more information that leads to better quality research. The government’s approach, he said, is to look at the healthcare system holistically and push the system to bring the results of research to its patients.

Over the course of the discussion, the panelists switched back and forth between talking about improvements that need to be made in medical data and healthcare, and policies that may encourage these changes.

With regard to policy, Obama spoke about the need for expanded and improved health insurance opportunities. He said that how that is implemented is fair ground for debate. One of the specifics he mentioned were plans that cover small expenses, but do not cover important or expensive procedures, like dealing with cancer, in reference to Zoe’s experience.

The president’s final comments were aimed at drawing a contrast between government and industry, saying that “government will never run the way Silicon Valley runs.” He described democracy as intrinsically “messy,” and pointed out that the government has many additional responsibilities to take into consideration when making policy. While innovation and societal improvement are at the forefront of the Government’s agenda, people need to recognize that rather than completely changing the systems in place, efforts should instead be placed on strategic improvements.