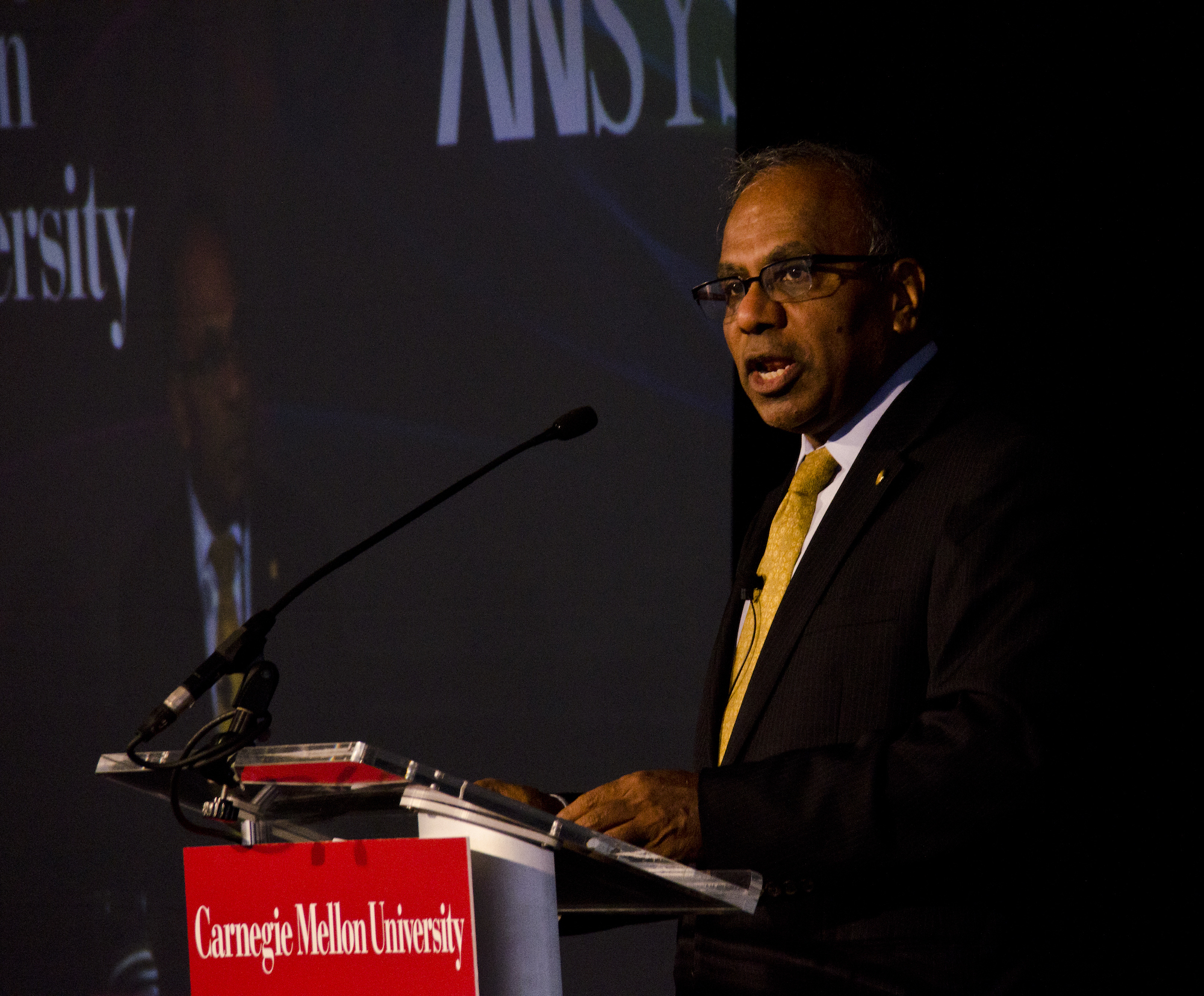 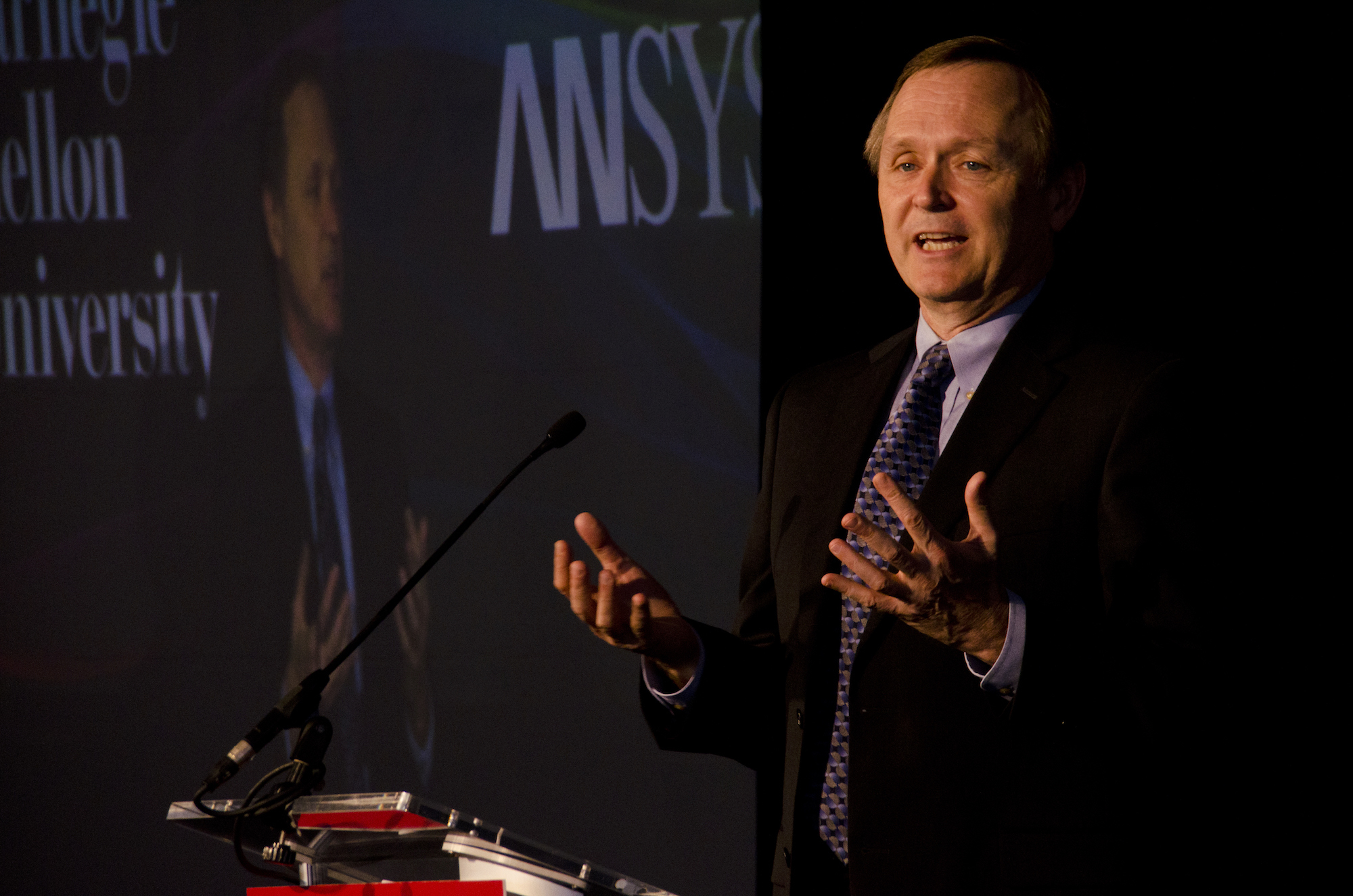 A groundbreaking ceremony held last Tuesday marked the start of construction on a new building on campus dedicated to the College of Engineering and to a recent partnership between Carnegie Mellon University and ANSYS. The plans for the anticipated 30,000 square foot facility were made possible by a generous gift from ANSYS, a global company that leads in engineering simulation software and is based near Pittsburgh.

The new ANSYS building will be located near Hamerschlag Hall and will feature a simulation and collaboration lab and a spacious “maker facility” for undergraduate students to build full-scale projects. It will also contain conference rooms, training and lecture space, and offices.

In addition to the space provided, “students will have access to simulation tools and cutting-edge technologies for the hands-on work that is a hallmark of our CMU education,” remarked James Garrett, Dean of the College of Engineering, referring to the modern simulation software and expertise of industry professionals that would be provided by ANSYS.

“Think of a space where you don’t just learn about the academics of how to design something ... but a space where you can get great minds together and you can actually have people conceive products, … assemble them, [and] actually make them using … advanced manufacturing techniques,” said James Cashman, president and CEO of ANSYS.

The ANSYS building’s proximity to Hamerschlag Hall places it next door to the redesigned Hamerschlag MakerWing, which includes fabrication and machining facilities, maker spaces, labs, and collaboration areas, providing a seamless transition from making components to assembling them into larger systems.
“We are grateful to ANSYS for the important educational opportunity this brings to students across our campus,” said Carnegie Mellon President Subra Suresh. “Through a variety of CMU initiatives, we have seen firsthand that maker spaces help students think more creatively and take a hands-on approach to solving critical problems.”

The collaboration between ANSYS and Carnegie Mellon University was announced in June and emerged from a mutual aspiration to expand the education of engineering students to be better prepared for the workforce, a challenge in a field whose reliance on hands-on skill and experience makes it difficult to teach entirely in a classroom.

It was a partnership that made sense, utilizing the broad intersection of research expertise between two leaders in engineering, computer science, and simulation technologies. At the groundbreaking ceremony, Suresh divulged that he himself had worked on ANSYS simulation software in the past, and so was familiar with the company and their value.

The collaboration is expected to “touch diverse fields such as autonomous vehicles, additive manufacturing, biomedical devices, sustainability of physical products and connected products,” according to the ANSYS website.

In addition, the advent of the new ANSYS building reflects a revolution in manufacturing methods and product innovation, referred to as Industry 4.0, that is “changing the way that products are designed and produced,” as described on the College of Engineering website. Traditional methods of developing products involved generating designs, then building and testing prototypes to identify design flaws, referred to as ‘build and break’ cycles. It was “costly, slow, and limiting to product innovation,” according to Cashman, since if a prototype didn’t work, an engineer could potentially have to start the process from scratch.
Industry 4.0, heralded as the fourth industrial revolution, incorporates the use of physics-based computational tools to digitally test and discard millions of alternative product designs and materials, without restriction, to pinpoint an optimal model for a product before a physical prototype is even built. The prototype becomes a final validation, rather than part of a long line of variants to test for flaws.

“Engineers can explore ideas as fast as they can imagine them, without being bogged down by the traditional process,” Garrett said. “This will eliminate barriers that keep new ideas from turning into actual products.”

In this way, the Carnegie Mellon–ANSYS partnership aims to incorporate a greater use of simulation tools into education in order to empower the next generation of engineers. Engineering simulation is currently mostly used by highly specialized experts, but promises vast improvements in innovation, energy efficiency, sustainability, and cost.

“By joining forces, ANSYS and Carnegie Mellon are investing in the future of engineering,” Cashman stated. “We will enable students and industry collaborators to create unprecedented levels of exploration and innovation by equipping all engineering students with the advanced tools and expertise they need.”
The multimillion dollar grant from ANSYS also provides for the endowment of an ANSYS Career Development Chair in Engineering. The Early Career Professorship will be awarded to a young faculty member conducting education and research in areas related to engineering simulation software.

The ANSYS building is projected to open in 2018. At the groundbreaking ceremony, Cashman gave a final remark on the broader impact he hoped the partnership and facility would produce. “This is just the foundation … that allows institutions like Carnegie Mellon and ANSYS and other industrial partners to come together and find new ways to collaborate on research, on teaching, such that when this generation of engineers come out, they’re even all the better prepared to be able to deal with the challenges that are only going to get more stark and more compelling over the years,” Cashman stated. “We’re very excited about this … it is a starting point. It is step one.”