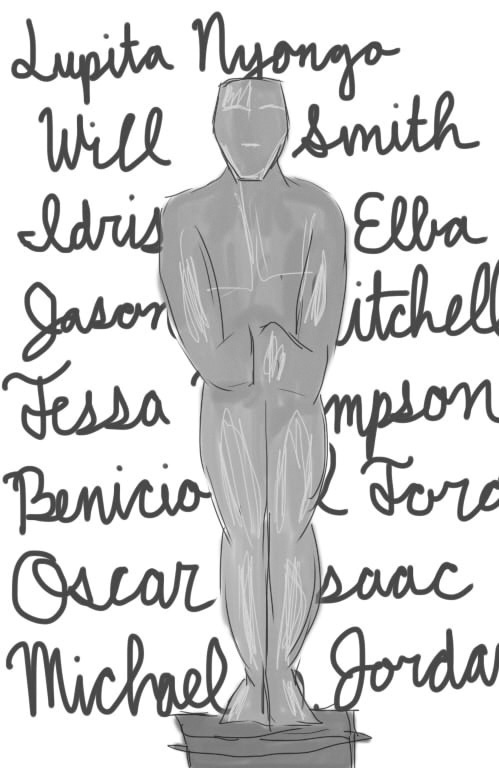 Credit: Maegha Singh/
Editorials featured in the Forum section are solely the opinions of their individual authors.

Across the nation, movie fans are furious. This is a country that is drained from decades of struggle against culturally-induced racism: job discrimination, racial profiling, white privilege, and similar issues. But this is also a country that loves to watch movies. So when our injustice is illuminated by the bright lights of Hollywood, the response is ferocious.
The list of nominees for the 2016 Academy Awards has incited outrage due to its lack of diversity, resulting in the indignant #OscarsSoWhite that has spread across social media. The all-white cast of Oscar nominees has caused many popular figures, such as director Spike Lee and actress Jada Pinkett-Smith, to speak out against this racial uniformity or to declare a boycott against the Oscars.

However, racism is a multi-layered prejudice. We are all aware of the fight against conscious racism. Conscious racism has been rampant throughout most of American history, scrawled across urban walls and federal laws alike. Yet while conscious racism is no longer culturally accepted, a more current type of racism is its lingering, still very potent, remainder: subconscious racism. A hidden, quiet form of flickering racism born, perhaps, in childhood exposure to cultural stereotypes or thought patterns; living within an unknowing host. This form of prejudice is much more subtle, and in that way, just as dangerous. This is the discrimination that dwells in “Oreo” jokes and hoodies, traffic tickets, and police bullets.

No conscientious American would consider themselves to be racist. Police officers deny racial profiling, but it persists anyway. This is because officers aren’t targeting people who are black, they’re targeting people who seem suspicious. But the reasoning process that determines who’s suspicious and who isn’t occurs at a subconscious level, which is where the racial profiling takes place. Of course, this does not apply to all police officers, just as it doesn’t apply to all plumbers or teachers. Yet it applies to enough officers to statistically over-target black citizens – and offend many black Americans.
What we should all understand, however, is this: if this subtle form of racism is unconscious, it may also be considered unintentional.

In the same way, the Academy Award members did not intentionally choose an all-white cast. It takes 300 members to make a nomination. It is likely that few of them—or perhaps none of them—actively chose to nominate only white actors. But this is more likely: many of these voters grew up watching prolific, accomplished, and white celebrities such as Tom Hanks or Meryl Streep, and perhaps they’ve unconsciously internalized the image of an “Oscar winner” as a white actor or actress. Thus, when faced with selecting Oscar nominees, they may perhaps tend to—without conscious thought—give added weight to a white actor or actress, merely because the white actor fits their expectations of the image of an Oscar nominee. Perhaps.

This racial homogeneity is a result of years of cultural programming. These Academy Award members, just like many Americans, may be well balanced, open-minded, kind, and tolerant. But they may still harbor unconscious racial prejudice—and weren’t even aware of it. Until now.

After a week of intense criticism from celebrities and fans alike, the Academy “approved a sweeping series of substantive changes”—in their own words—to diversify their membership. By 2020, they intend to double the number of female and minority votes. They hope that these changes will result in non-whites composing 14 percent and women composing 48 percent of their membership.

The response to this carefully-designed proclamation has been generally positive. While some still view these changes as inadequate or only an act of self-preservation, many appreciate the bold efforts. April Reign, the former attorney and managing editor of BroadwayBlack.com and creator of #OscarsSoWhite, said that she is “very encouraged” by the changes. She also stressed the need “to put pressure on the Hollywood studio heads to make more inclusive and diverse films, because the academy can only nominate quality work that has been made.”

So while this uniquely glamorous case of subconscious racism has received positive actions towards its elimination, the environment in which it was born still requires more forceful changes—changes that cannot be made by rewriting policy. When the origin of such prejudice lives in the American subconscious, it cannot be altered by only hashtags and celebrity boycotts. True change will only result from the education of this country as a whole, encouraging support of minorities’ films and roles to pervade society more than this archaic prejudice already has.