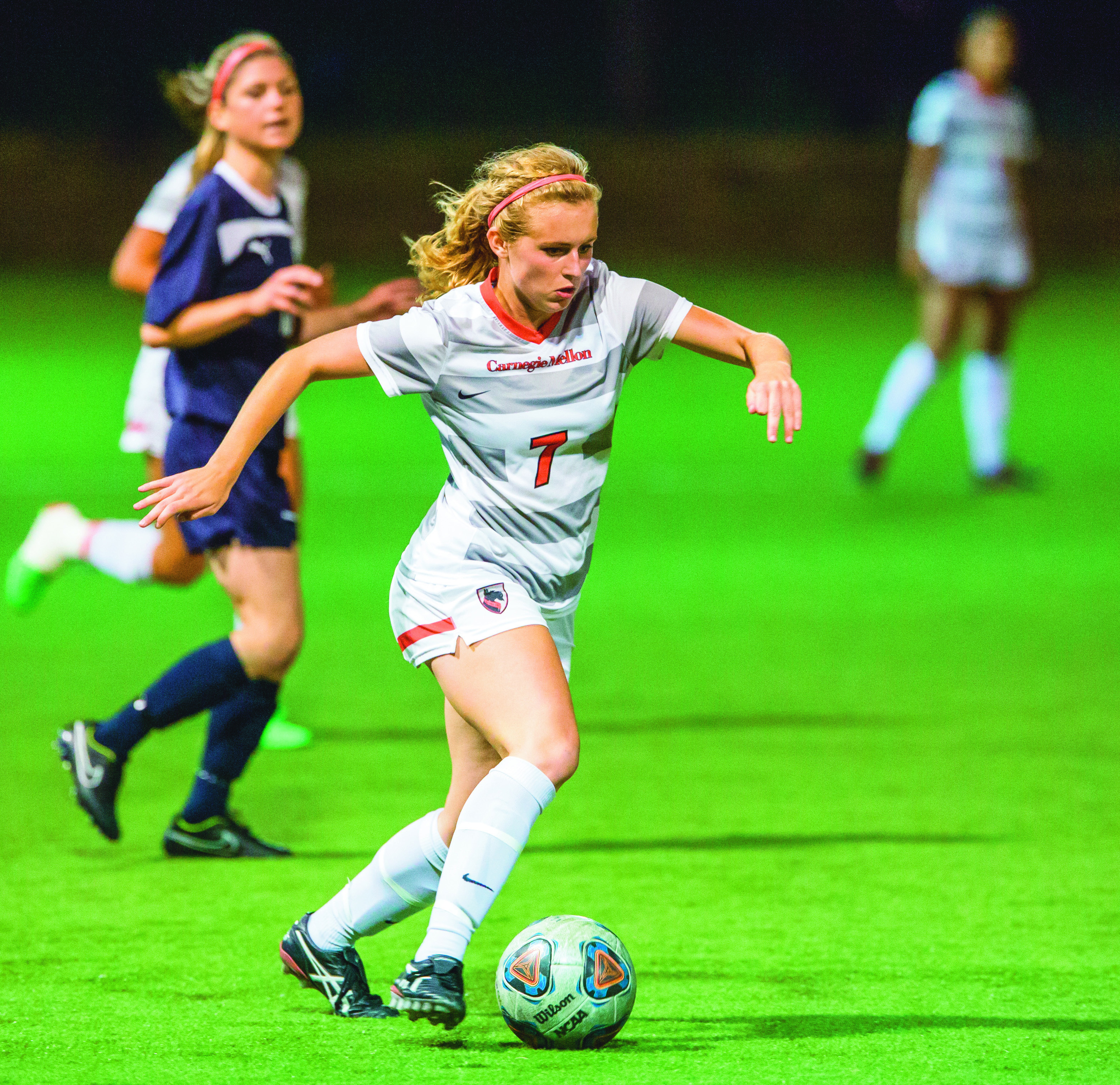 The Carnegie Mellon women’s soccer team took the field on Tuesday night looking to defend their undefeated record against the Baldwin Wallace Yellow Jackets. While the Tartan women may have been tired for their third game in five days, they certainly didn’t show it as they handily defeated Baldwin Wallace 4–1.

The Tartans came out with an early aggressive push that paid dividends in the eighth minute when senior midfielder Louisa Pendergast made a smooth goal into the lower right corner off a great pass through the defense from sophomore midfielder Haili Adams. The game lulled for a bit after the initial score as Baldwin Wallace put up a strong fight against the Tartan’s pressure. But as the game went on, the Tartans took control of the field until the Yellow Jackets seemed unable to force the ball to the Carnegie Mellon side. In the 29th minute, the pressure proved to be too much for the Yellow Jackets as Tartan sophomore forward Sienna Stritter was fouled making a move in the box. This set the Tartans up for a penalty kick, and Pendergast rose to the occasion once again, sending the ball past the Yellow Jacket goalkeeper to put Carnegie Mellon up 2–0. The Tartans rode this momentum through the rest of the game, and in the 38th minute, the Tartans seeimngly began to show off when first-year midfielder Tessa Allen leapt over the defense and headed a ball into the goal off of a corner kick from junior midfielder Delaney Lam. The Tartan’s final score of the game came three minutes later, when Stritter found sophomore midfielder Morgan Kontor for a wide–open touch into the goal, leaving the score at the half 4–0.

The game moved slowly through the second half, although the Tartans did appear to have a firm grip on their lead. They kept the ball on the Baldwin Wallace side of the field, maintaining pressure even though they there were no Tartan goals in the second half.

While the Tartans did not manage to score, they did manage to hold the Yellow Jackets to only one goal. This came in the 77th minute when Tartan keeper Sarah Mahler couldn’t keep her hands on a header delivered from Yellow Jacket Kelly Gough. With the exception of this late goal, the Tartans played sound defense, as junior midfielder Anna Vonderhaar kept the ball on the Yellow Jacket’s side to allow her team to play aggressively.

Ultimately, the Tartans showed that they deserve their undefeated record with a dominating performance. They will look to put their record to the test with real stakes in their conference games later in the season.

The Tartan women played again Friday night against the John Carroll Blue Streaks, and they displayed another dominating performance to continue their undefeated record. The Tartans emerged victorious with a 5–1 scoreline with goals from Haili Adams, Sienna Stritter, Nicole Winegardner, Louisa Pendergast, and Tessa Allen. They managed to outdo John Carroll in shots on goal by a margin of 21–3 showing just how dominant they can be.

On Sunday the Tartans beat Capital University 3–2. Kontor tied the game in the 90th minute, and sophomore forward Grant Wilmer scored the winning goal in overtime.

The Tartans look to continue running the table as they move into October.