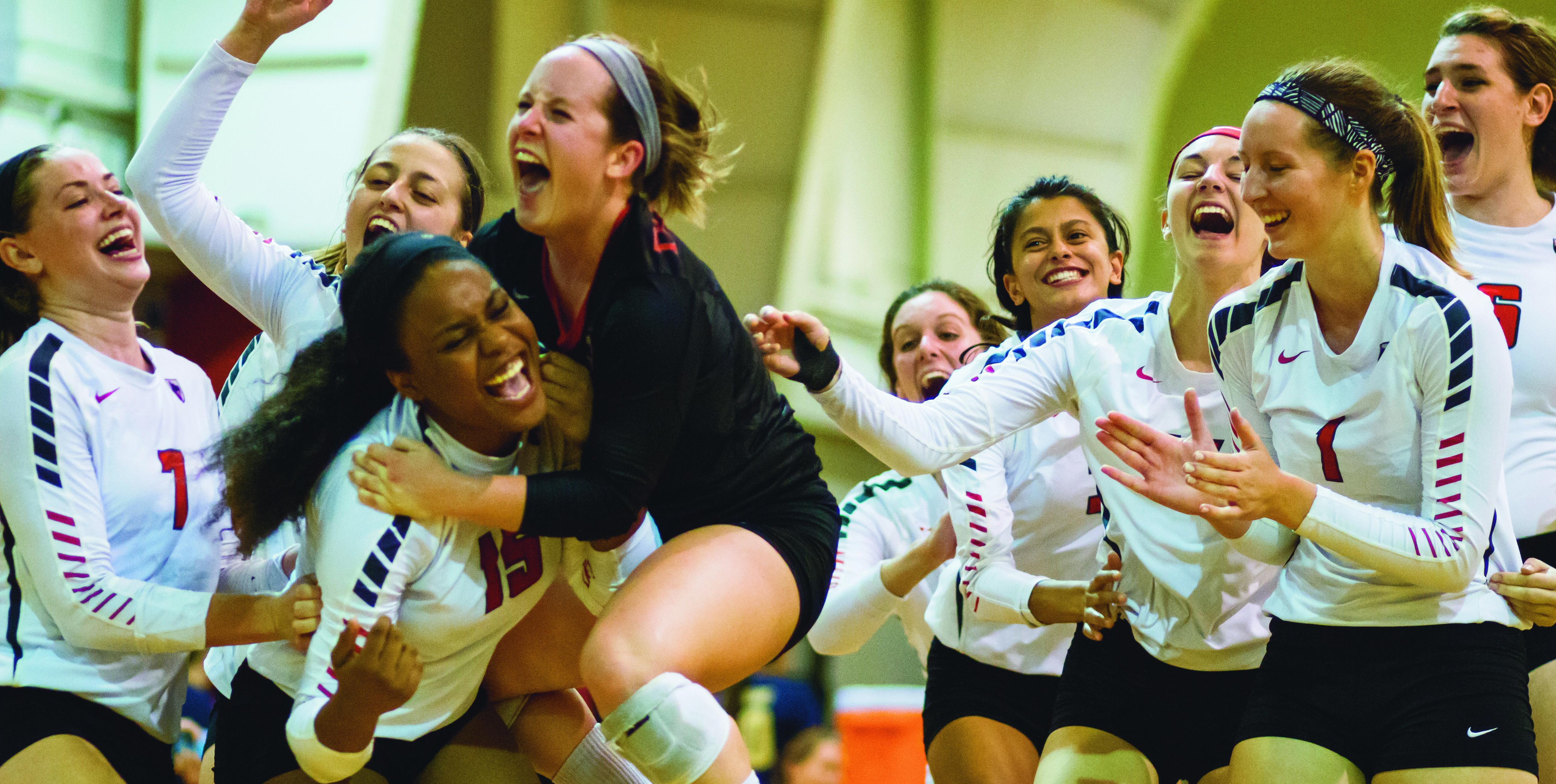 The volleyball team celebrates after coming back from a deficit. (credit: Staff Photographer)

The Carnegie Mellon women’s volleyball team came back to campus on Friday and Saturday to showcase its success in front of the home crowd at the Carnegie Mellon DoubleTree Invitational. The Tartans finished 3–1 in the round robin with wins against Stevenson, Pomona-Pitzer, and Mount Union. The lone loss—the Tartans’ second of the season—was to John Carroll in a competitive match Friday night.

Strong play and positive energy through the two days of double headers displayed the Tartans’ grit as they fought back from lost sets and cheered each other on, even when playing from behind. After the team fell behind 19–11 in their third set against Stevenson, junior captain and setter Emily Newton could be heard calling out “C’mon Tartans!” to rally her teammates.

Play at the line also proved to be a strong point for the home team, with junior middle blocker Jackie Gibbons and sophomore middle blocker Eliza Donahue making key blocks and kills. The tournament is one of only a few held at home, Newton noted, “It was really great to have [the] tournament at home because [the team] could have all our fans here and [they] could really show campus … who [they] are as a team."

Reflecting on the tournament play, Newton expressed pride in her teams’ effort. Twice, the Tartans came back from losing consecutive sets to dominate in the fifth set. She said, “We have our goals, and one of our goals is to always play to win, so we had to refocus on our goal and we decided that this is our game and we’re taking it from them. So it’s all our focus and energy.”

The team opened up play against Stevenson Friday evening with a strong showing, holding off a late Stevenson rally to win in five sets. The Tartans got ahead early, controlling the first two sets with wins of 25–12 and 25–20. However, Stevenson clawed their way back, leading the way throughout the third set, winning 25–19.

The Tartans came back swinging in the fourth set, with an unassisted kill by Gibbons and a kill by Donahue assisted by Newton leading to a 12–7 lead. The Stevenson women rallied and surprised the Tartans, sending the game to a third set, but the Carnegie Mellon women came prepared to finish. First-year outside hitter Lauren Mueller opened the set with a kill off a Newton assist, and the Tartan women pressed to a 9–1 lead. From there, the team comfortably closed out the 5th set with a 15–11 win.

In their only loss of the weekend, the Tartans fought to compete against John Carroll in a match coming immediately on the heels of their five-set battle with Stevenson. After splitting the first two sets, the women fell behind early in the third, with Newton getting shaken up three points in. The team fought back from a 1–6 hole to tie the game at 17. The Tartans battled back and forth with John Carroll in the 4th set. Up 23–22, Gibbons drove back the John Carroll defense with a strike, and Newton quickly set up the return for a key down the line strike by first-year outside hitter Sarah Jurgens. Although John Carroll prevailed in the last set, the Tartans put up a good showing coming into the match with little rest.

On Saturday, the Tartans began play against Pomona-Spitzer. Coming off a loss, the team rebounded well, taking the game in straight sets. After holding off a rally in the second set, the Tartans dominated the third, going up 8–1 and leading to the finish. They closed out the game in dominant fashion, with a kill smashed down the middle of the court by Gibbons off a Newton assist.

The final test for the team came from Mount Union, who the Tartans again took to five sets before claiming victory. The team came out strong early with kills by Gibbons and Mueller to take the lead, and continued with the momentum to win the first two sets. In a fierce battle, the Tartans struggled to establish a lead in the third set, with the teams tied at 25. This required an extended set to determine a winner. The team looked to have the win after a Jurgens kill gave them the lead 30–29, but Mount Union fought back and claimed the tie-break. After another tight loss in the second set, the Tartans came out firing in the fifth set again, reminiscent of Fridays fifth set dominance against Stevenson. Gibbons opened the set with a kill off a Newton assist, and the Tartans rallied to a 10–2 lead, capped off by a cross-court, arcing kill by Mueller, after a great save by junior libero Molly Higgins. Another Newton assisted Mueller kill got Carnegie the win.

The Tartans, now 18–2, will continue their season Saturday at the 1st UAA Round Robin at New York University.