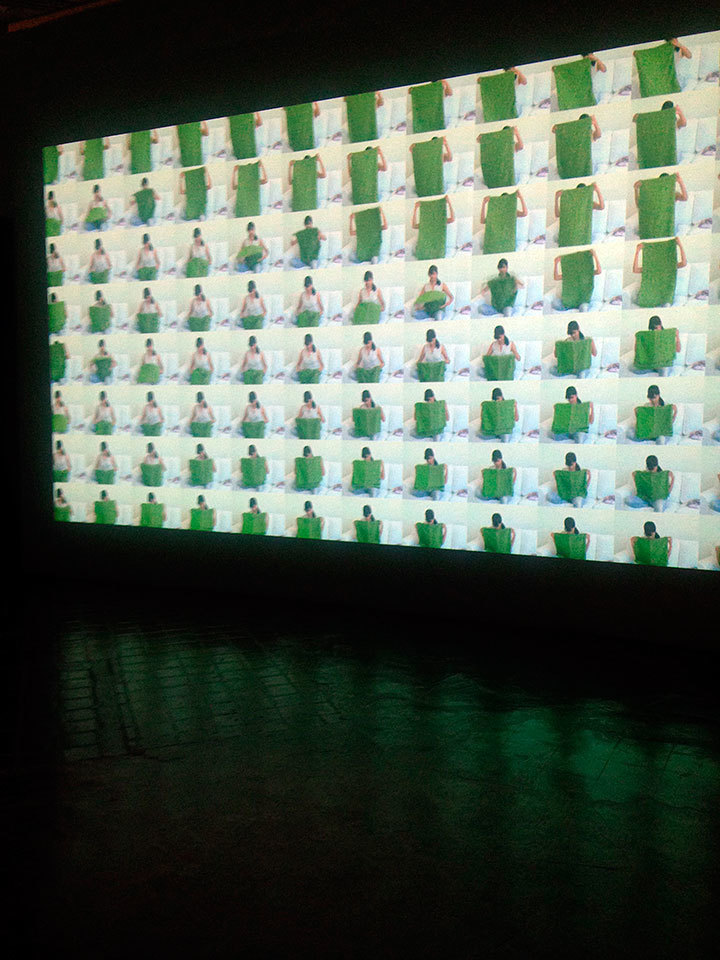 A mesmerizing video installation stretches across the wall in artist Surabhi Saraf’s FOLD, one of her pieces shown in the exhibit “Plus One” at the contemporary art gallery SPACE. (credit: Lindsey McClary | Junior Photographer)

The Pittsburgh Cultural Trust knows how to throw a good party, and their formula is simple: free food, free wine, and art with a purpose. In the Cultural District last Friday, artists and art-lovers communed over local and international creative works from the Cultural Trust’s Gallery Crawl and India in Focus showcase.

The Crawl was hosted by various galleries and nonprofits primarily residing on the parallel streets of Liberty and Penn Ave. Participants included bars and restaurants such as Olive or Twist, on Penn Ave, who displayed the work of Art Institute students in their second floor while serving drinks on the ground floor. Additionally, much of the Market Square businesses such as Gaby et Jules, the French bakery, remained open late into the night, serving specialties for hungry and thirsty “crawlers.”

The Crawl also served to kick off the India in Focus showcase, in which for six weeks, dozens of arts experiences paying homage to Indian traditions and culture will be displayed throughout the Cultural District. The kick off was held primarily at the outdoor stage where shows of music and dancing such as Bhangra were held continuously throughout the evening. Wood Street Gallery and SPACE gallery also participated in the kick off by opening new exhibits curated specifically for the showcase.

Wood Street Gallery served as a pseudo-entrance to the Crawl due to its prominent location on the Wood/6th St. triangular block. Perched above the Wood Street subway station were two floors of warmly lit, white-washed walls where the works of artists Nandini Valli Muthiah and Hetain Patel were displayed.
The second floor is home to the photographic series, “Eva,” as well as three standalone video works by artist Hetain Patel. The series is broken up into diptychs and triptychs, each of a different moment. Hetain’s wife is the subject of these photos. She is photographed from the back, showing only her head and torso. There is a drawing on her otherwise naked back in each of the moments. In one series, a man joins her in a silent conversation through the writings on both of their backs. Each moment is composed of two or three images which create a disjointed, schizophrenic feeling for the viewer and is particularly consistent with the stream of consciousness text displayed on the skin of the subject. The videos convey Hetain’s compulsion for exactitude as he reconstructs scenes from Crouching Tiger, Hidden Dragon and from footage of his father giving a tour of his factory.

Nandini Valli Muthiah’s photographic prints from her series “Definitive Incarnate” cover most of the third floor space. The work is supernatural in subject and cinematic in method. There is a certain canniness to her images ­— you may even feel as though you have seen the image before. But although the lighting, background and positioning of extras feels reminiscent of the way many modern films are shot, the subject is new. An Indian god named Krishna is presented plainly, at the focal point of the image, creating a new reality that is both familiar and unusual.

The contemporary gallery, SPACE, presented another exhibit called “PLUS ONE” as part of India in Focus, which included various mediums including installation, sound works, prints, and video. Separated only by temporary walls, the works of artists Shilpa Gupta, Sumakshi Singh, Surabhi Saraf, and Avinash Veeraraghavan manage to live in the space harmoniously. Each work contributes to the common theme of invoking the tradition of repetition and pattern-making in Indian visual culture. It is beautiful to see all the different ways in which this motif could be expressed. Saraf’s video of deconstructed dance and the rhythmic clapping of Gupta’s flap board piece “24:00:01” both served as interesting compliments to the music and dancing seen on the stage just several yards from the gallery doors. Saraf’s ”FOLD,” a large video installation, stitches together a mosaic of videos where a woman folds clothing, from shirts to saris, in a methodical and mesmerizing fashion. Singh’s projected stop-motion animation on silk with embroidery called “Light Threads” shows the birth of a pattern from nothing.

The Crawl had even more to offer than the experiential art exhibitions. The Pittsburgh Cultural Trust Arts Education Center presented a design exhibition where Young Architects and 2015 Design Competition entries displayed their visions for the future of architectural design in a lively and collaborative space. This location also invited guests to draw what design means to them amidst the inspiring and innovative work of the competitive entries.

Overall, the Cultural Trust’s Gallery Crawl was an upbeat scene where locals and visitors could commune over local and international artwork and experience the Cultural District at its very best.