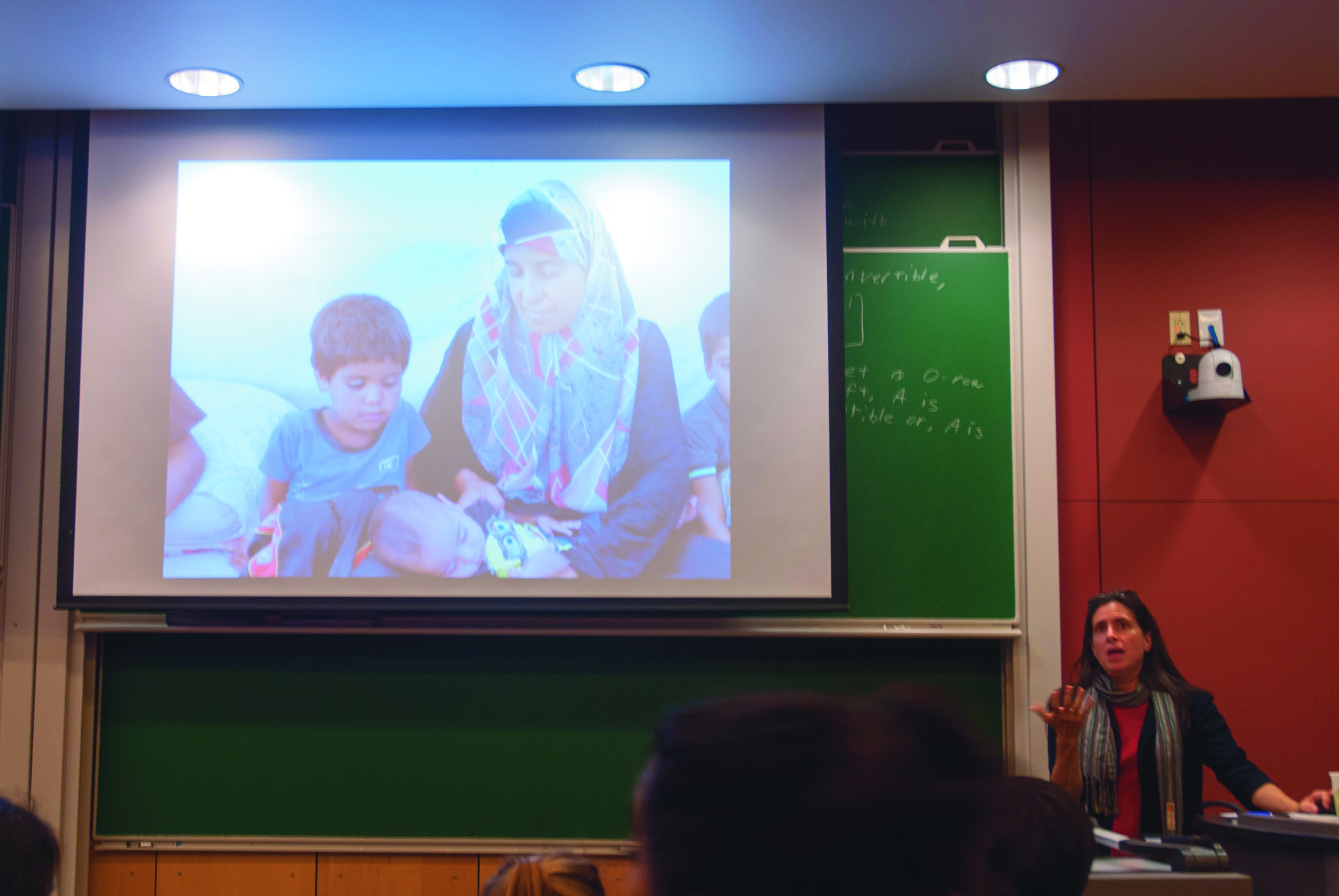 As the Syrian Civil War rages on, Syrian refugees are looking anywhere to escape the violence.

One Syrian refugee family fled from Aleppo to Iraq, where, without adequate humanitarian aid, they lacked access to education, work, and even food and shelter. The family of fourteen was forced to live in an abandoned construction lot beside a major highway.

Senior Advocate for the Middle East at the D.C. nonprofit Refugees International Daryl Grisgraber encounters refugee families similar to the one described.

On Wednesday, Grisgraber met an eager 130 members of the Carnegie Mellon community at Baker Hall’s Steinberg Auditorium for her discussion “Refugees from the Syrian Crisis: Reflections on the Changing Needs and the International Response.”

The event was hosted by the student organization Facilitating Opportunities for Refugee Growth and Empowerment (FORGE), and the Center for International Relations and Politics (CIRP).

Senior decision science and public policy major, and co-president of FORGE Rosii Floreak explained the purpose of the event. “We really just wanted to get more awareness on campus,” Floreak said. “We wanted to give people the opportunity to learn more about the Syrian and Iraq crises.”

Since the Syrian Civil War began five years ago, 4 million people have fled the country, 7.5 million are internally displaced, and 12 million still inside Syria rely on humanitarian aid.

According to Grisgraber, only 1 percent of the millions of refugees throughout the world are resettled by the United Nations (UN) each year. The UN High Commissioner for Refugees determines who is a refugee and who can be resettled, yet official refugee status is still no guarantee of safety.

Usually, being approved for resettlement as a refugee requires a critical medical condition, an unaccompanied minor, or a case of torture. The process can be long — Grisgraber described cases where client refugees died while waiting to complete the resettlement process.

The enormous number of Syrian and Iraqi refugees has overwhelmed neighboring host countries such as Lebanon, Jordan, and Turkey.

Syrians who fled their country several years ago, as well as those who are fleeing Syria now, are becoming increasingly desperate.

In Lebanon, Jordan and Turkey, many refugees cannot obtain work permits or enroll their children in school. As a result, more refugees are homeless. Grisgraber said that development assistance to host countries would help alleviate the burden on those countries’ infrastructures and resources.

“For Syrians in particular, the desire to go home — and the fear that it won’t happen for a very long time — are at the front of everyone’s minds,” Grisgraber said in an email to The Tartan. There is also a distinct fear of not being safe even in a country of asylum, and many Syrians have expressed concern about the Syrian regime finding out where they are and targeting them even outside of Syria.

As the crisis becomes more and more protracted, the ability to earn a living and provide for their own basic needs is clear: “Perhaps that particular fear could be called the fear of becoming dependent upon aid to survive” Grisbrager said via email Grisgraber added that internally displaced people inside Syria and Iraq can have an even more difficult time receiving primary aid. Refugees face insurmountable security issues that hinder humanitarian groups, which makes it impossible for them to enter Syria and parts of Iraq.

International aid agencies’ funding is spread thin with several other recent conflicts, such as those in South Sudan, the Central African Republic, and Myanmar.

This strains the money and resources available for the Syrian refugees, and puts severe limits on methods to alleviate the crisis.

Grisgraber outlined the underlying problem of the refugee crisis: humanitarian aid does not develop with the ever-changing needs of refugees.

Many refugees enter neighboring countries and receive some basic necessities, but sustainable, long-term aid is difficult to provide. 70 percent of Syrian refugee children do not attend school.

When lack of basic resources is paired with the inability to find stable work, refugees find themselves considering returning to war-torn Syria with the hopes of finding better opportunities at home. Helping refugees become self-sufficient is an issue yet to be solved.

In the lecture, Grisgraber emphasized that the United States has the greatest ability of any country to provide aid, and therefore has an obligation to lead the effort of refugee support.

Through the UN High Commissioner for Refugees, the United States recently announced that it will increase the amount of refugees accepted into the country to 100,000 people by the year 2017.

Still, more problems remain with resettlement. Grisgraber explained that the United States’ national security concerns often take precedence over the humanitarian responsibility to ease the crisis. Fear of extremism has resulted in many people being denied resettlement due to obscure relations to any sort of extremist activity.

Grisgraber cited one account of a woman who was not allowed to resettle in the U.S. because she had “aided terrorists” after being forced at gunpoint to provide water to a Syrian rebel. “What happens in Syria and to Syrians affects all of us, albeit in different ways,” Grisgraber explained. “The relatively recent migrant crisis in Europe, and the EU’s ability to help people, is a perfect example of this.

As Syria became old news and as the focus on providing aid drifted away, Syrians started moving again looking for help, and now we have an additional humanitarian situation to address.”

Several Carnegie Mellon students weighed in on how to help address the crisis both in Pittsburgh and around the world.

Morgan Reed, a first-year studying civil engineering, took a hands-on approach. “I joined FORGE with sort of just the thought in mind of helping refugees after I heard that there were refugees in Pittsburgh,” Reed said. “Just doing little things, and getting involved in organizations that are trying to reach out in these situations.”

Floreak has volunteered with the same Nepali refugee family from Bhutan for three years as part of FORGE’s effort to pair students with refugee families to help them resettle in the Pittsburgh community.

“I think that FORGE is a really great way because you meet with resettled refugees on the weekends, you get to build a relationship with someone who’s really gone through something terrible, and you get to help them settle in the United States,” Floreak said.

“I think a really easy way is to be informed,” first-year international relations and politics major Philip DeCicco said. “The more aware you are, the more steps you can take toward changing those things.