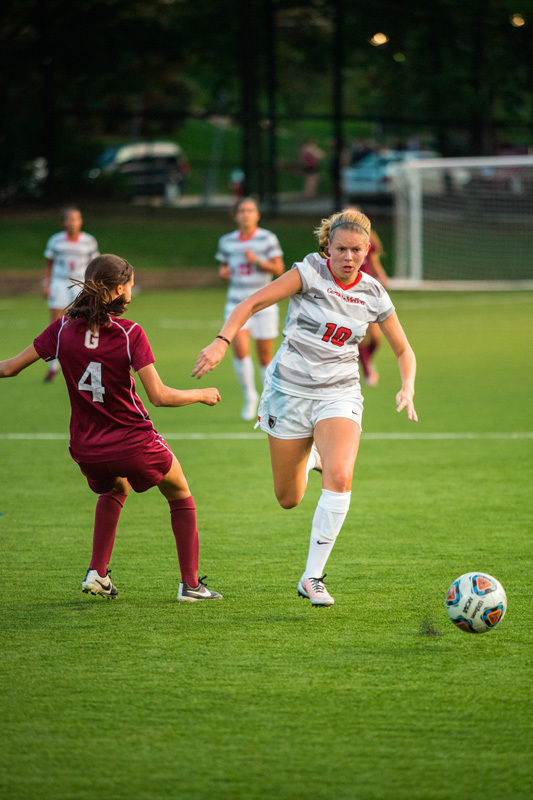 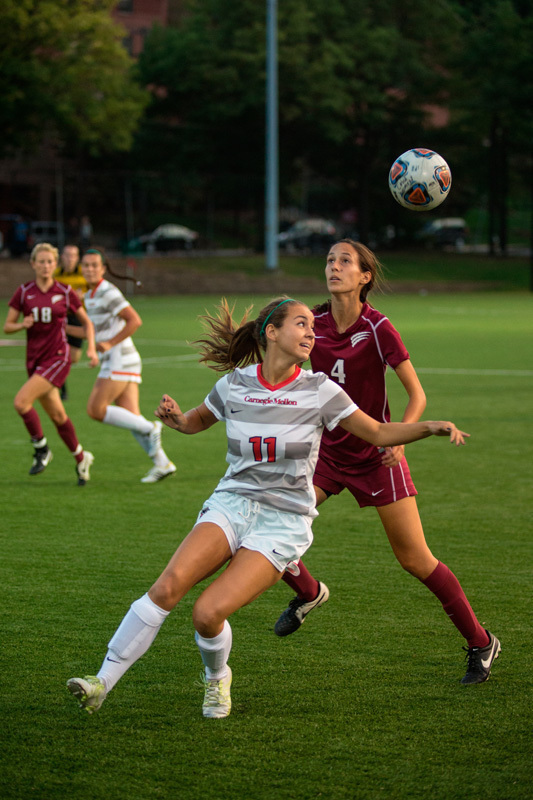 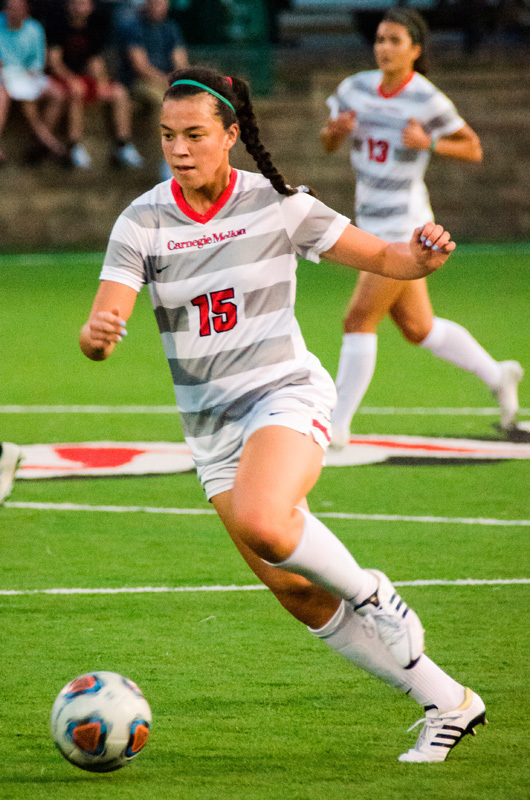 On Friday night, the Carnegie Mellon women’s soccer team set out to take on Grove City. After a goal shortly before halftime, Carnegie Mellon was able to hang on and pull out the victory. The team is still yet to give up a goal and remains unbeaten, upping its tally to four wins and a tie.

The match started as a slow affair. Both teams were able to get the ball deep into the other side, but there were very few chances to score for the two squads. That didn’t last long, however. Ten minutes after the start of the first half, Carnegie Mellon was able to put together some threatening attacks, which Grove City simply could not match. The Tartans were able to collect eight shots on goal in the first half. Several shots barely stayed within the keeper’s clutches, including one by first-year Kaily Bruch, which was just slightly deflected into the crossbar, preventing an early goal for the Tartans.

The rest of the first half of the game went decidedly the Tartans’ way, but they had nothing to show for it. Despite several very good chances to score, they all ended in near misses or simply fizzled out before Carnegie Mellon was able to capitalize.

Yet, with two minutes remaining before halftime, that changed. A deflection after a corner kick came to sophomore midfielder Haili Adams, who looped a shot around the crowd and the goal keeper, landing the ball in the net to give the Tartans a lead they would not relinquish.

The second half brought more of the same, as the Tartans spent much of the match after the break attacking Grove City’s goal. It appeared the Tartans had doubled their advantage after a shot found the back of the net, but it was called back for an offside. The flow of play strongly favored the Tartans, who had a myriad of chances and corners but failed to capitalize on any.
It seemed in the final minutes that Grove City might have found an equalizer. A miscommunication on a Grove City goal kick nearly caused a breakaway, but a quick recovery by the Tartans’ defense forced a shot from way out that ended up going wide. On another play, sophomore goalkeeper Sarah Mahler was able to save the match by her fingertips, deflecting a shot over the net. She quickly picked up the ensuing corner kick, and Grove City never got another chance.

The Tartans’ dominance was more apparent in the disparity of shots taken than by the score. While Grove City had some desperate heaves towards the net, they were only able to tally one shot on goal, compared with the Tartans’ 14 shots, nine of which were on target. Several corner kicks resulted in near misses as well. The 14-1 count showcases the dominance obscured by the 1-0 final. The Tartans spent much of the evening in front of the Grove City goal, while Grove City’s chances were few and fortuitous.

The Tartans proceeded to beat Frostburg State 3–1 on Sunday. Adams added two more goals to her tally, bringing her to three for the season. Senior midfielder Carson Quiros added another goal, her first of the year.

Carnegie Mellon will continue its schedule on Tuesday, Sept. 22 as they take on Baldwin Wallace.