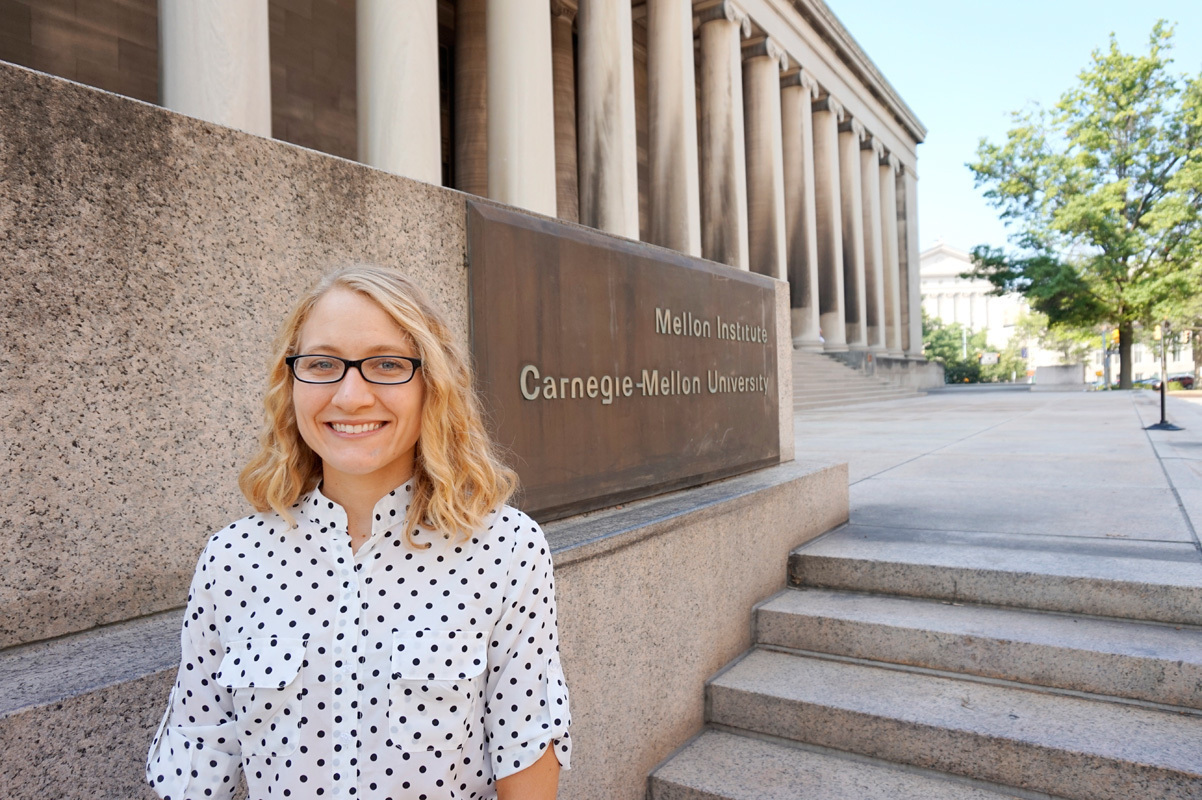 Stefanie A. Sydlik, a Carnegie Mellon alumnus, spoke last Tuesday as part of a seminar series hosted by the biomedical engineering department at Carnegie Mellon University. In front of a packed audience in a classroom in Doherty Hall, Sydlik discussed her extensive research in polymer science, materials chemistry, biomaterials, and electronic materials. During her presentation, she also introduced a biomaterial that may hold the key to creating new orthopedic materials, implants and devices that could help advance the field of orthopedics.

Sydlik was an undergraduate chemistry major at Carnegie Mellon, where she participated in research on electronic polymers that would lay the foundation of her career. She later went on to study novel triptycene and nanocarbon-based materials at the Massachusetts Institute of Technology (MIT), where she worked towards a Ph.D. in organic chemistry in Professor Timothy Swager’s laboratory.

After earning her PhD, she spent two more years at MIT completing her postdoctoral fellowship in chemical engineering. Under the supervision of professor of chemical engineering Robert Langer, she developed a novel biomimetic block copolymer, which is a synthetic material that can be used for cartilage repair through the imitation of biochemical processes.

After spending nearly a decade at MIT, Sydlik was recently appointed as an assistant professor in Carnegie Mellon’s Department of Chemistry. Her past research prompted her to start working in a laboratory group that focuses on synthesizing novel polymers and materials. During her seminar, Sydlik focused on the many properties of graphene and carbon nanotubules.

Made of carbon, graphene is composed of sheets of benzene rings, which are molecular structures shaped like hexagons. Carbon nanotubules are rolled up, cylindrical sheets of graphene. Sydlik had an interest in these graphenic materials, as they could serve as biomaterials with the ability to repair damaged bone or tissue.

“They are conductive. They have very high mechanical strength,” Sydlik said. “And we wanted to tap into that.”
Her research inspiration came from her graduate study years when she was competing as an elite level rower. After hurting her shoulder, Sydlik was forced to discontinue the sport. Taking biomaterials classes at the time, Sydlik began trying to figure out ways that her shoulder could be repaired after realizing that no method currently existed that could be used to replace her injured cartilage.

“I started thinking about it, and [I] started to design a material that could be used for cartilage regeneration,” Sydlik said. “And this is what I focused my postdoctoral research on.”

Her interests in making a material that could mimic the mechanical properties of cartilage had led her to focus on the biocompatibility of graphene oxide, a derivative of graphene. Graphene oxide is made by mixing graphite, an inexpensive aggregate form of graphene and the principal component of pencil lead, and reducing reagents that strip away electrons from the graphite molecules. With its various functional groups which give organic compounds their unique chemical behavior, graphene oxide would be suitable for chemical manipulation, making the compound a desirable material for organic chemists.

When she started her postdoctorate research, Sydlik read a paper from another research university indicating that graphene is auto-degradable, meaning that after being soaked in neutral water for two months, it produces harmless decomposed organic matter called humic acid, which is the primary component of dirt. This discovery had important ramifications regarding the material’s biocompatibility, its ability to generate an appropriate host response when integrated into living tissue. “To me, there are a lot of questions about the biocompatibility of nanoparticles, but dirt is really not that bad,” said Sydlik.

Graphene oxide had already been put to use in various contexts. Previous studies used graphene oxide as a stimulator for normal growth and for targeted delivery. Sydlik believed that graphene oxide had potential for other uses beyond the previously completed studies. “Despite the volume of work, graphene has never been tested as an orthopedic material,” Sydlik said. “And most of the in vivo studies that have come out were not extremely thorough. They were missing pieces.”

After exploring gaps in prior research, Sydlik and her postdoctoral group found that graphene oxide demonstrated promise as a biomaterial, mainly due to its high compatibility in living cells. “[There] is this study that kind of suggested that the cells were really interacting with the functional groups, which would support the idea that if you can personalize graphene oxide, you would be able to change the behavior of the cells that were interacting with the [bio]material,” Sydlik said.

Solutions of graphene oxide were also injected under the skin of mice to see how the graphenic material would fare in living organisms. “We were actually surprised to find that the response we found was basically a classic foreign body response,” Sydlik said. “[The body] seems to be fairly happy about having graphene oxide implanted.” In addition, the rapid infiltration of graphene oxide by the immune cells led to fewer cases of chronic inflammation.

After proving that graphene oxide was “not so bad” as a biocompatible material, Sydlik and her laboratory group at Carnegie Mellon are trying to find ways to make the compound more friendly when implanted in the body as a material for bone regeneration. Through passion and creativity, Sydlik and her colleagues hope to make contributions to the field of biomaterials that will improve many lives through the intersection of polymer and materials chemistry and biomedical engineering applications.