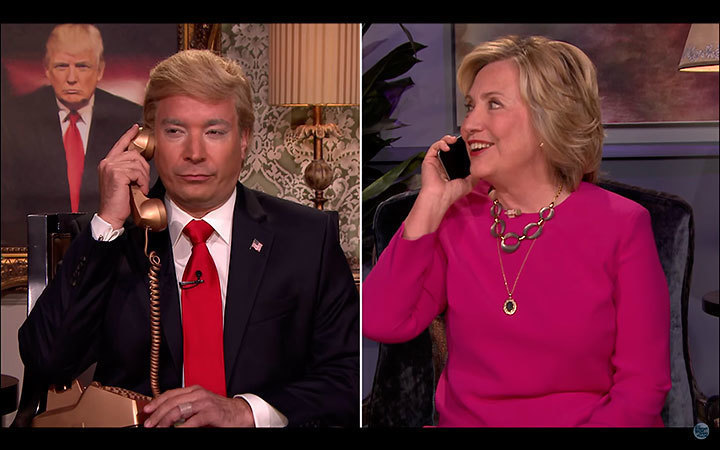 Secretary Hillary Clinton joined late night comedy king Jimmy Fallon during a conversation in which he impersonated Donald Trump, and Clinton quipped “let me grab my pen” as she reached for a glass of what appeared to be white wine. (credit: Courtesy of *The Tonight Show Starring Jimmy Fallon* via YouTube)

From making appearances in late night TV shows to the GOP Presidential Debate, this has been a busy week for many presidential candidates. The Tonight Show Starring Jimmy Fallon had Donald Trump as a guest early in the week, who Fallon then vigorously mocked throughout the rest of the week. Fallon’s show also brought in Hillary Clinton after the GOP Debate and made even more fun of Trump. On Late Night with Seth Meyers, we have seen Bernie Sanders appear earlier this summer and Martin O’Malley this week.

Over on CBS, Bernie Sanders visited the Late Show with Stephen Colbert on Friday night, and Jeb Bush visited not too long ago as well. And in somewhat unrelated news, the Secretary General of the United Nations visited on Thursday night. So late night TV got very political this week.

It is surprising that Trump even agreed to appear on NBC, given its current disdain of Trump’s comments and litigious relationship with the candidate. Trump had sued NBCUniversal over the Miss Universe pageant because Miss Universe will no longer be televised on Univision or NBC after Trump’s offensive comments against Mexicans.

Trump continued his busy schedule this week with the second Republican candidate debate on Thursday where he said a bunch of crazy things no one should ever be saying about important topics, such as infant immunization schedules should be spaced out over a longer period of time with lower dosage shots, essentially nullifying the purpose of the immunization schedule. Ben Carson, a neuroseurgon, and Rand Paul, an ophthalmologist, both said basically the same thing, which is a little terrifying and quite interesting, considering they are both actual physicians that graduated from medical school.

Even though Trump was able to explain some things on The Tonight Show and get some laughs, his performance was nothing compared to Clinton’s. She handled the interviews with aplomb, showing her human side and ensuring that people understood that she is not “a robot.” The potential Democratic nominee also presented herself with her experience, knowledge, and capacity to become the next President of the United States. Even though general news channels have been portraying her as cold and calculating, Clinton has been able to showcase her mellow, jovial side and make fun of herself when she makes public appearances. For instance, Hillary poked fun at her “email scandal” by calling her emails boring and mostly procedural stuff. She also participated in a sketch that made fun of Trump, wherein ever-comical host Jimmy Fallon impersonated the Republican. Of all the candidates on late night television this week, Clinton is the candidate that I think benefited most from talk show appearance because she was funny, spoke clearly about her ideas, and had the crowd loving what she was saying.

Democratic socialist and Clinton-challenger Bernie Sanders had a good time with Colbert on The Late Show just shortly after Stephen Colbert began his tenure as host. Sanders’ interview was clear and simple, and he was able to dispel some of the negativity that surrounds the word “socialist.” He made smart comments that the crowd enjoyed and was able to showcase himself in a program that has a young audience, thus increasing his name recognition. Many people have been saying that Sanders has a long road ahead to defeat Clinton’s political machine, and if he keeps making appearances like these and continuing to expand his brand, he might just be able to do so.

The rest of the candidates who made appearances on talk shows, on the other hand, were not very notable and did not do anything strange or unexpected; they were bland and vanilla when compared to Trump, Clinton, and Sanders. While the presidential election will not be won on late night shows, interviews shot on these programs keep candidates in the public eye and go a long way toward humanizing politicians — individuals who have long time have battled the reputation of being lofty, disinterested, and overly sobering.