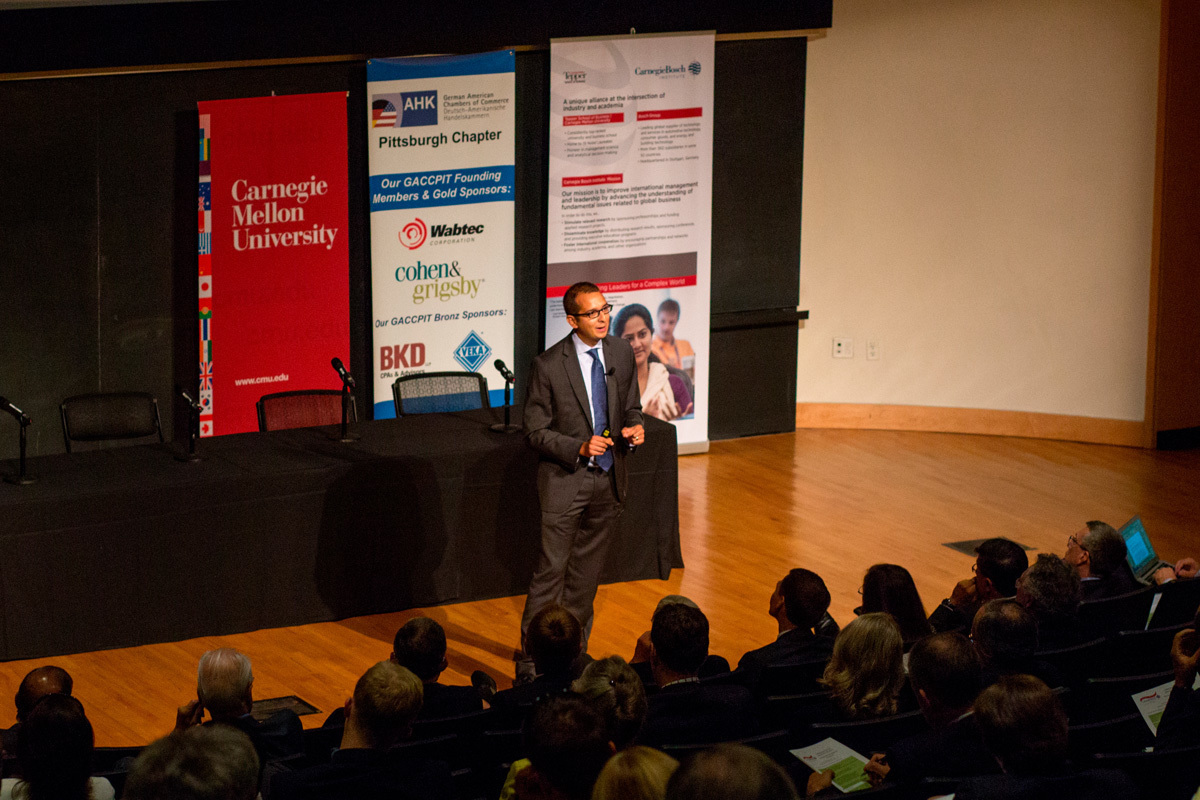 On Wednesday, as life on Carnegie Mellon’s campus went on as per usual, business executives, professors, and entrepreneurs from around the globe congregated in the McConomy Auditorium to celebrate the 25th anniversary of the Carnegie Bosch Institute.

The Carnegie Bosch Institute, or CBI, was created in 1990 as a collaboration between the Bosch Group, which is based in Germany, and Carnegie Mellon University.

According to its website, the CBI “has been pursuing its mission of improving international management and its impact on leadership by enhancing the knowledge and performance of managers and executives in global operations, as well as supporting academic research in the field.” With the Tepper School of Business’ international management track, the relationship between CBI and Carnegie Mellon has been ever growing.

Since its inception, the CBI has worked as a part of the Tepper School of Business to educate future leaders about the intersection between innovation and entrepreneurship. The celebration on Wednesday highlighted several of the achievements that the partnership has yielded, as well as the potential that the Institute has to impact the future of global leadership innovation.

CBS executive producer Brittany McCandless (DC ‘08) served as the mistress of ceremony, while notable professors and business people alike gave keynote speeches, conducted panels, and then performed lightning talks: six minute speeches followed by one question from the moderator. The talks ranged in theme from Innovating for Society to Trends for the Future: Impact on Global Industry & Management, Innovation in Global Markets, Technologies for the Future, Leading Entrepreneurship & Innovation, to Systems Integration for Sustainability.

In the final panel, three deans from Carnegie Mellon spoke: dean of the College of Engineering Jim Garrett, dean of the School of Computer Science Andrew Moore, and dean of the H. John Heinz III College Ramayya Krishnan. The panel was moderated by Mike Trick, the senior associate dean at the Tepper School of Business. The three deans spoke on the major changes that they anticipated would come to light within the next few decades of research and innovation within their fields.

Moore spoke about question and answer systems, the systems that humans use to answer questions. He said that within the past few years, the field has undergone an extreme change as humans turn more and more frequently to their cell phones to answer questions rather than relying on desktop systems.
As the technology adapts, said Moore, humans will increasingly turn to their machines to answer questions that require intimate details about the inquirer — for example, knowing what medicine to take, or knowing what building the machine is in so that it can call the front desk for the user.

In Krishnan’s portion of the panel, he addressed innovative manufacturing, and how to move from point solutions to platforms by way of policy.

Krishnan emphasized that this innovative manufacturing trend would be key in helping move manufacturing jobs back to the United States. In closing, the three deans emphasized that rather than considering the crossover between technology, innovation, and business — a dangerous trend that will likely put white collar workers out of a job —the United States in particular should be optimistic about options for the future.

This is true especially in Pittsburgh, where the tech industry is growing by the day. Tech companies are making the city more and more of a hub for global entrepreneurship and business management solutions.

Tepper School of Business Dean Bob Dammon emphasized how important it is for Carnegie Mellon to be at the forefront of these fields and how thankful he is for the CBI to allow it to be forging the path in creating leaders for a complex world. Dammon called Carnegie Mellon, and particularly the CBI, the place where the new trends in business, technology, and data converge.

“Carnegie Mellon is comfortable with change because we are often the agents of that change,” Dammon said. “We are in a unique, good position.”