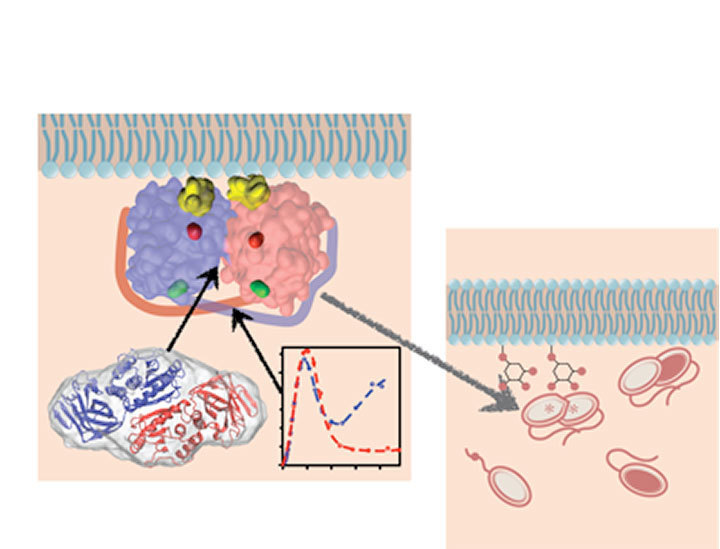 The human body functions through a combination of millions of molecular interactions. In an effort to better understand the molecular interactions of a tumor suppressing protein, PTEN, a team of researchers from Carnegie Mellon University built on a key structural insight to establish the structure of the protein. The team was led by Mathias Loesche and Frank Heinrich, two professors from the physics department at Carnegie Mellon University. They hope that highlighting aspects of the protein’s stability and molecular interactions will enable other researchers to develop drugs to overcome the way the mutations in the protein could lead to the development of cancer.

As part of a collaboration that began five years ago, Loesche and Heinrich were approached by Alonzo H. Ross, a professor of biochemistry and molecular pharmacology at the University of Massachusetts Medical School, to help obtain structural data about PTEN in an effort to better understand its involvement in cancer.

Prior to the beginning of this project, published research on PTEN had highlighted its important role as a tumor-suppressing protein. In a healthy individual, the normal form of the protein acts as an enzyme at the cell membrane and plays a role in a complex biochemical reaction that is involved with regulating the cell’s growth and ability to divide. Many cancers stem from the loss of this regulation, without which cancerous cells can grow and divide out of control to produce a cancerous mass of cells. In individuals affected with certain cancers, mutations in the gene-encoding PTEN cause PTEN to be formed incorrectly, hindering its ability to interact with other molecules and carry out the necessary chemical reactions.

However, despite this superficial understanding that PTEN plays a role in disease prevalence, little was known about the complex mechanisms that mediate its interactions. To better understand these interactions, scientists often attempt to uncover the structure of the molecules to visualize them at the molecular level and understand how structure mediates function.

“PTEN belongs to a group of partially disordered proteins, which means it is very difficult to crystallize,” Heinrich said.

The ability to crystallize is necessary in order to utilize mass spectrometry to determine the orientation of the molecules that make up the protein in 3-D space. To overcome this challenge, the team utilized small-angle-X-ray scattering (SAXS), which scatters X-rays through a solution containing the protein. Heinrich mentioned that this method is a much lower resolution approach than mass spectrometry, but does not require the protein to be crystallized. He also emphasized that “SAXS doesn’t directly give a structure of the protein; instead you get an envelope of the protein and you must use computational tools to arrange the molecules that make up the protein inside the envelope.”

SAXS has been used previously to explore PTEN, but it was always assumed to exist alone, as a monomer in solution. After looking at the data, Heinrich and his team hypothesized that PTEN exists in a dimerized form, where two identical copies of the protein are attached together. With this insight, they used the computational tool Rosetta to simulate the protein structure and docking within the envelope provided by the SAXS data.

They found that in the dimers, the C-terminal tails of the proteins may bind the two protein subunits in a cross-wise fashion, increasing their stability. Increased stability directly correlates to the protein’s ability to carry out reactions at the cell membrane.

The team also explored mutated forms of the protein to better understand how these deviations from the norm can impact the protein’s ability to function and lead to cancer.
They determined that the mutated form cannot create dimers and will remain as monomeric subunits in solution.

“It was important to note that the SAXS data was collected from the protein in solution, whereas within a biological system, it will be near the membrane,” Heinrich said. In the future, the research team wants to better understand how the protein acts specifically at the membrane.

These insights provided by the new solution structure can give other researchers points of interest to target in the protein when developing drugs that could recover the function of a mutated form.
The structure the team has found contributed to the understanding of PTEN and the complex molecular interactions in which it participates.