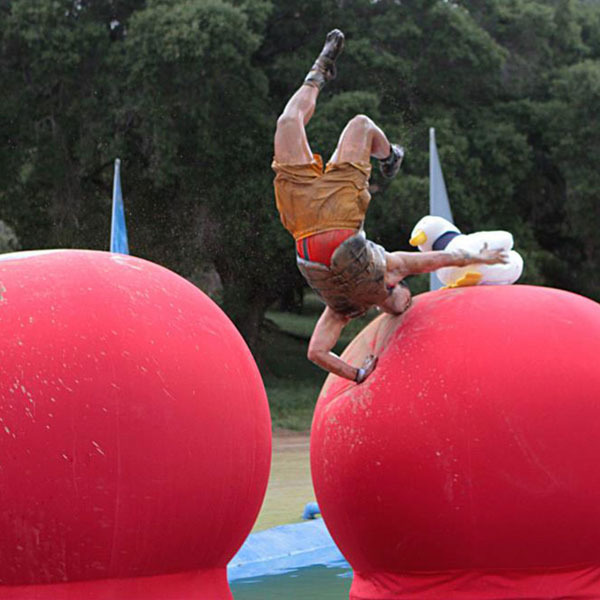 For a show with very little plot or contestant talent needed, Wipeout continues to attract huge audiences who appreciate the dramatic misfortunes of others. (credit: Courtesy of Wikimedia Commons)

As much as I’d like to believe I’m a cultured intellectual, mindless entertainment might just be my greatest weakness.

You know the drill. You’ve spent all week working your butt off, and Friday finally comes. The work hasn’t ended (does it ever?), but you have ten minutes or so to breathe. You’ve earned it. A movie is way too much commitment, and even an hour seems long to focus on one episode of a show. But 20 minutes of Friends? A YouTube video or two? That sounds perfect, right?

Wrong. That’s how they trap you. Next thing you know, you’re sitting pants-less in the dark covered in Tostitos crumbs, and you’ve literally run out of BuzzFeed videos to watch. You can actually feel brain soup leaking out of your ears. You’re distantly aware that you have class tomorrow, but the panic has been mostly drowned out by that dazed, icky, self-loathing feeling. You’ve transcended to a new plane of procrastination.

What is so darn addictive about #RELATABLE sketches, cats being cute, and strangers performing outlandish challenges? Well, I’ve decided to punish myself for this weekend by puzzling it out.

There’s a science to our stupid crap binges. For starters, length is key. The perfect YouTube video spans four to six minutes. It needs to be short enough to hold your probably short and divided attention. At the same time, it must be long enough that the process of clicking and loading and buffering feels worth it, and you don’t become aware that you have tumbled into a chain-clicking spiral. As you click, you must always be thinking: “Just one more, one more couldn’t hurt.”

Close cousins with length is cohesion. A quality editing job is half the battle won against your wrecked productivity. Editing cuts out any boring lag-time or unrelated tangents, so your attention doesn’t have a moment to waver. Through the entirety of the video, you should be laughing, “aww”-ing, about to laugh, or engaging in limited self-reflection (i.e. “Why don’t I have a cat?”; “Maybe I could pull off a faux hawk”; “How hard can it be to sneak a cat into my dorm?”). Editing turns a video into a bite-sized dopamine blast. Much like Tostitos, you can never have just one.

Now that we have the form locked down, let’s take a look at content. A video (at least one that doesn’t feature small, fluffy creatures) should satisfy at least one of two natural human compulsions: finding people who are “Just Like You” and gawking at those who are definitely not. I call this the relatable-voyeuristic spectrum, where the vast majority of popular videos find a home.

BuzzFeed has the spectrum down to a fine art. With the sheer scope and volume of its content, you can try on identities like hats. Right now, a playlist of “tall/gay/Asian/awkward problems” is out there waiting for you. It won’t be long until your relate-ability standards dwindle. You’ll start clicking on things like “11 Startling Boob Confessions” because, hey — you have those.

Voyeurism is also a tempting beast. People like to watch other people do things that they can’t, don’t, won’t or shouldn’t do. While you probably wouldn’t want to go anywhere near surströmming (“The Stinkiest Food in the World”), people’s faces are pretty freaking rich when they get a whiff. And while no one will likely ever let you on the Wipeout set, it’s a hell of a lot of fun watching equally unfit people give it a try. Maybe you’d love to have a professional makeup artist transform you into Lady Gaga, but most of us just don’t have those kind of resources. Watching it online is the next best thing.

Addictive videos allow you to live vicariously through other people, and personality is critical. Sure, you’re alone in your room, not with any actual friends. But keep watching and the strangers in these videos will start to feel like friends. Vloggers get popular by inviting strangers to peer into a window at their usually glamorous, fun, and interesting lives. Even mass-produced, common-denominator BuzzFeed lures in viewers with characters like “The Try Guys.” You’ll start thinking “oh, that guy’s got cool hair, he’s pretty funny” and end up thinking you might as well watch every video he’s ever been in.

Basically, trash entertainment is the slipperiest of slopes. There’s a fine line between a guilty pleasure and an actually self-destructive habit. I’m still walking the tightrope. I hope your balance is better than mine.