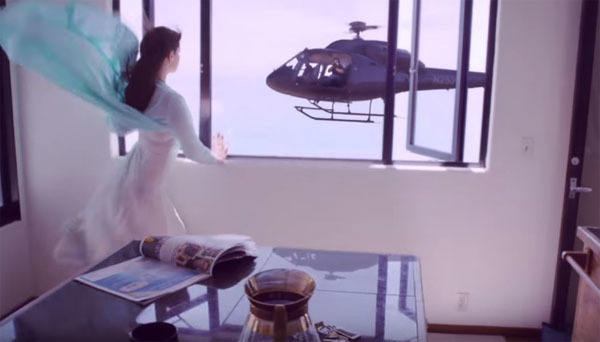 This summer I found myself in a couple-week slump during which I was listening to a lot of Lana Del Rey. One of the best things about Lana Del Rey is that she can always be counted on to sound sad. Even Del Rey’s songs that are arguably semi-optimistic in content sound very sad, so you can always tune out the lyrics and just focus on how unhappy the melody makes your soul feel and wallow in self-pity for an hour or two. If you find yourself listening to too much Lana Del Rey, it is always advisable to stand up, shake it off, and listen to “Lollipop” by Mika on repeat until you feel perkier. For those of us who see the positives of her permeating misery and long for the day when we can explore new facets of Lana Del Rey, we do not have long to wait. Lana Del Rey’s fourth studio album Honeymoon is set to be released this upcoming Friday, Sept. 18.

Four singles from the 14-track album have already been released. The single “Honeymoon” was released in mid-July to general appreciation, with a leading melodic string line characteristic of Del Rey’s earlier music. Contrary to some of these earlier numbers, the string line is sweeter and gentler, and there is less of her frequently-used, tortured-sounding synth line beneath it. Have no fear however: The song still has a wistful and melancholic tenor. It opens with the lyrics, “We both know it’s not fashionable to love me,” which is completely in accord with the self-deprecating, insecure, and romantic nature of Del Rey’s music.

The other pre-released singles from the album include the lead single “High By the Beach,” and promotional singles “Terrence Loves You” and “Music to Watch Boys To,” which were released progressively through the summer, the latter promotional single only a few days ago.

Del Rey is also notable for her combination of throaty, almost deadpan singing in her lower register and passionate falsetto melodic lines. If I had to determine the biggest difference in the songs so far released from Honeymoon, I would have to say that there seems to be more singing in Lana’s upper register, giving her songs a bit of a lighter feel. In general, while nuanced and often disciplined, Del Rey’s voice sounds a little less controlled and a little less produced in these singles. While there is still reverb on her voice, and they do not sound like acoustic songs at all, Del Rey seems to have taken a small departure from the extent of production on past songs. But believe me when I say that, given these songs, the sound and subject matter of Del Rey’s music has not changed much since 2014’s Ultraviolence. But that’s totally fine — Del Rey has a sound, and it’s working for her.

In addition to releasing her singles on YouTube, Spotify, and iTunes, Del Rey has released a music video for “High By the Beach” and has also released a small preview music video that features short musical clips of all the songs on the album. Revealed perhaps most obviously in Del Rey’s short film “Tropico” is her passion for sensual allure grounded in historical events. A creature of the past, Del Rey’s music often reflects common themes from history or religion. In “Tropico,” the story of Adam and Eve was a central theme. In her song “National Anthem,” Del Rey interpreted the lifestyle of a woman married to a politician in a weird re-enactment of President John F. Kennedy, with music video blending midcentury glamour and modern popular culture. In “High By the Beach,” Lana Del Rey wanders around a large and sparsely decorated beach house as a chopper floats outside the window with what looks like a paparazzo photographer trying to get a photo of her through the window. Del Rey frantically runs through the house, and the video culminates with her taking a large gun out of a guitar case and shooting down the chopper, desperately trying to live quietly and away from the limelight. The set and wardrobe in the video are simple with Del Rey’s face serene and placid to match. The video definitely continues the pattern of Del Rey’s effortless sensuality and drama.

Lana Del Rey’s life is intriguing to many, and most recently actor James Franco has come forward to announce that he is cowriting a book about Del Rey, a personal friend of his. In a Rolling Stone article about the upcoming book, Franco quoted Del Rey as saying, “Just write around me; it’s better if it’s not my own words. It’s almost better if you don’t get me exactly, but try.” This quote is so quintessentially Lana Del Rey, and is reflected in her music. It is never quite clear if her songs and videos about love, temptation, celebrity, emotional upheavals, are about her own life experiences and desires, or if they are entirely a construct of the persona she wants to portray. Her music reveals personal demons but also evokes a sense of mystery and secretiveness. It is this emotional depth and complicated meaning that keeps us all coming back to Lana Del Rey for more of her soft yet desperate vocal timbre and dramatic story arcs.

While this album may not demonstrate an incredible level of artistic growth for Del Rey, the album, which is produced by Del Rey herself, might just in fact give listeners the most authentic portrayal of Del Rey’s artistic vision to date. Most importantly, the album still seems like an excellent option for a rainy, stressful day of homework and afternoons pondering the complications of messy relationships. This excellent emotional fodder will be available to the masses Friday, when Honeymoon is released.