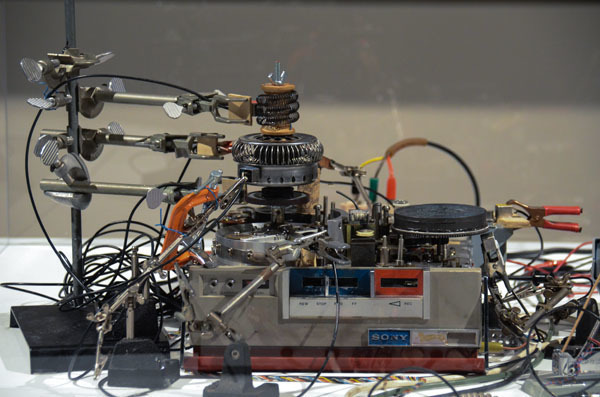 Complex, technological installations on the Miller Gallery’s second floor allow visitors to create their own auditory experiences via various manipulations on the art itself. (credit: Abhinav Gautam/Photo Editor)

The first floor of the Miller Gallery looks more like a 19th-century science experiment than an art piece, and that’s why it serves as a perfect introduction to the gallery’s current exhibit “Aftersound: Frequency, Attack, Return.” “Helmholtz (DUO),” an installation piece by Stanford-based artist Paul De Marinis, is a demonstration of Helmholtz resonators. Candle flames are placed alongside large glass spheres that act as resonators for a low-frequency sound that can be heard thumping like a heartbeat in the darkened space. A spinning mirror behind the flame allows the viewer to see the flame dance and respond to the soundwaves. It sounds simple, but the space creates a certain sense of delicacy in watching a small flame tremble from a barely audible thud.

The concept of the aftersound is similar to that of the afterimage, in that one can continue to “hear” a sound after it is no longer being played. The exhibit is curated by School of Art Associate Professor Melissa Ragona and Margaret Cox and features work from artists across the country and the world. All of the pieces explore the nature of sound across mediums, such as combining sound with a visual medium, transforming it across mediums, or manipulating it through technological hardware. Many of the pieces are interactive, giving “Aftersound” visitors a more dynamic experience than a traditional gallery exhibition.

Each floor of the exhibit has its own distinct feel and aesthetic. The third floor explores sound along with both static and moving visuals, in which many pieces explore the transformation of sound waves into visual mediums. The second floor, on the other hand, resembles something like Steve Wozniak’s garage. Large, messy-looking technological installations explore the transformation and manipulation of sound using magnets and wires.

On the second floor, “IR Chorus,” by Pittsburgh-based artist and School of Music Assistant Professor Jesse Stiles displays candles placed around the perimeter edge of a table. Infrared sensors are positioned above the candles, converting the flickering flame to a varying voltage which in turn modulates a set of individually tuned digital oscillators. This creates a low electrical buzzing that can be heard coming through a speaker — an actual sound that is created by the flickering of the flame. This is an example of how “Aftersound” explores the transformation of sound across mediums.

The third floor has many pieces that explore the visual nature of sound. “Quotidian Review” by New York-based artist Matt Wellins is an interactive software piece that links sounds taken from the sound effects library of animation studio Hanna-Barbera, to psychedelic visual representations of mundane objects such as Coke bottles and briefcases freely floating in the digital space. Using a mouse, visitors can move the objects around and crash them into each other, generating the cartoon sound effects.

Curator Melissa Ragona shared her motivations over email for choosing sound as the theme for this fall’s Miller Gallery exhibit.

“For many years, I have studied the critical impact sound — as a medium — has had across the arts, i.e. in particular, I have explored the use of sound in experimental film, and more recently, how sound plays a role in contemporary art. I also teach a course entitled ‘NOISE: Toward a Critical Theory of Sound and Hearing’ in which I encourage students to deconstruct the ‘hegemony of vision,’ the deeply seated visual bias dominating Western thought and culture since the ancient Greeks. I am currently teaching NOISE within the School of Art and, together, we are attempting to construct a ‘critical theory of sound,’ foregrounding the ways in which we hear (casual, concentrated, distracted) as well as the contexts in which listening takes place, i.e. the social and historical conditions of reception that give meaning to what is heard. Many of the artists in our exhibition have often been featured prominently in my class readings and playlists, such as Maryanne Amacher, John Cage, Paul DeMarinis, Marina Rosenfeld, Cathy Berberian, György Ligeti, Karlheinz Stockhausen, and Iannis Xenakis. So, I’ve been wanting to curate an exhibition on sound for the Miller Gallery for quite some time now — to expand both my teaching and my own research.”

“Aftersound” will run in the Miller Gallery until Nov. 22. On Sept. 25 there will be an official opening reception from 6 to 8 p.m., which is free and open to the public and will see some of the artists in attendance discussing their work.