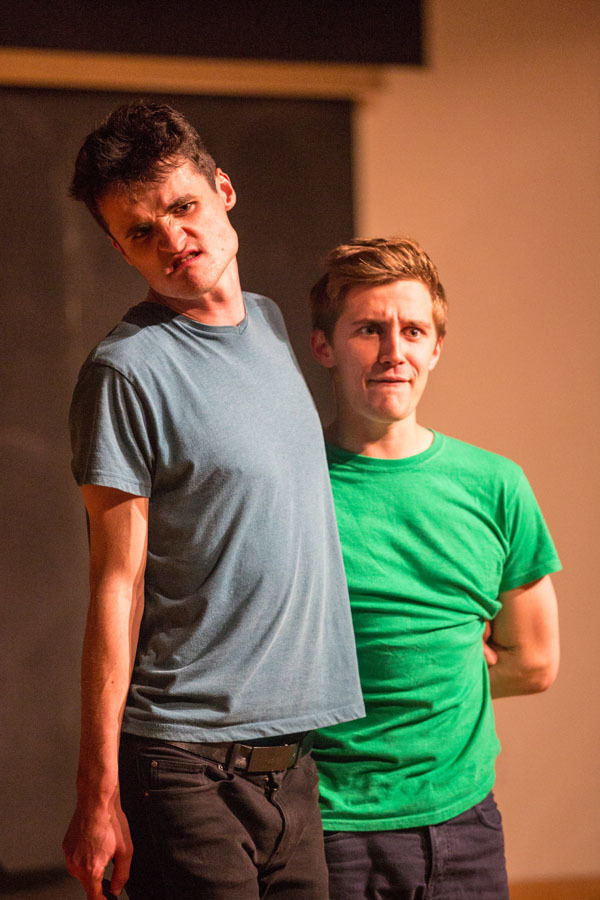 Luke Summer and Archie Henderson-Cleland brought the house down with an interactive sketch in which they pretended to be grapes gossiping on a vine. (credit: Brandon Hong/)

For those who don’t know, every year for the past 6 years or so — according to director/writer Hunter Allen — Scotch’n’Soda Theatre has hosted the illustrious Cambridge Footlights. The Footlights, a sketch comedy troupe from Cambridge University, start afresh each year with an entirely new cast and crew, as they have been doing since 1883. Past members include Peter Cooke, Eric Idle, Hugh Laurie, John Oliver, and many other famous funny Brits. Point is, they’re pretty cool.

This years show, “Love Handles,” had everything, from poop jokes to cowboys in love to some gossipy grapes. I attended the 10 p.m. show in McConomy Auditorium on Friday night, which was the second of two shows they performed that evening. While McConomy was not totally full, the show was a great experience for everyone involved. The actors played their parts well, and it was clear to the audience that they knew what they were doing. They moved together and performed as a cohesive unit.

Toward the beginning of the show they did a sketch in which one character had received another’s arms in a transplant, but all control remained in the original owner. One character moved their arms in relation to the other’s storyline. This scene only worked because of the intense connection the actors clearly had. It was rehearsed well and made to look thoroughly convincing.

From this they moved to a musical number centered around the forbidden but burning love between the outlaw and the sheriff, riffing off of the Brokeback Mountain trope we all know so well. This number, and subsequent musical numbers, shared the same sense of humor and wordplay utilized by Jermaine Clement and Bret McKenzie of HBO’s Flight of the Conchords. For those who like that kind of humor, which plays off of preconceived notions, hidden emotions, and whimsical wordplay, this would have done it. I’m pretty sure I cackled at the line, “I’m not into necrophilia, I just want to necro-feel your ass,” which was, arguably, the best line in the entire show.

In a later scene, the two men, Luke Summer and Archie Henderson-Cleland, are linked together gossiping away. It is revealed that the two are grapes hanging on the vine talking trash and collecting/telling secrets about their neighboring grapes. While this scene in and of itself was funny and had the audience laughing away, the most impressive part came at the end. The two leaned into an audience member and asked for a secret. When they hopped back up, they told the audience the secret. What was impressive, however, was that instead of simply repeating what the audience member had said or stating something previously scripted they improvised a secret in almost perfect unison. Now, anyone who has watched Saturday Night Live has seen two people try to simultaneously improvise a unison line — Kristen Wiig and Fred Armisen did it as Kath and Garth all the time — but what you may not have seen is it being done successfully. While Armisen and Wiig manage to entertain, it typically becomes a situation in which one of them comes up with the phrase and the other masterfully reads the direction of speech to create unison. Summer and Henderson-Cleland, however, actually managed to mentally tie in and appeared to create the line together in the moment, making it that much more entertaining.

Each actor was great at what they did. Summers has a great talent for accent, Henderson-Cleland moves like a praying mantis and matches Summers’ accent talent almost completely, Eleanor Colville fully committed to each moment utilizing body and speech beautifully, and Olivia Le Anderson has incredible control over her body. I later found out that she in fact studied ballet for many years, and thus her physicality is less surprising and still incredibly funny and impressive.
Ultimately it was clear that the Cambridge Footlights was a unit. These people have worked together for months at this point and have really learned how to play off of both each other and the audience. According to some members of cast and crew, the audience in each place is quite different. I’m sure some members of our campus community would be glad to know that we are the most heckle-y audience they’ve had so far. Well done.

In one of the final scenes Summers, as an Australian chiropractor, plucks a volunteer from the audience to whom he offers an adjustment. At the 10 p.m. show I attended, the man they chose did about as much as he could to make sure he was funny. He was, by the way, but what made it great is that every time the audience member laid down incorrectly, or later straddled Summers in a new and different way, Summer played it off beautifully. He never broke character, he never got frustrated with the scene, he never even tried to speed the audience member along. He simply played further into it. His conviction and dedication to the scene and the space was expert, and made the event seem much more welcoming and open than many shows I have seen in the past. The fourth wall wasn’t broken because the fourth wall was never really there.

The entire night was a conversation between the audience and The Footlights, and we loved every minute of it. Every joke may not have landed, but every scene was funny and we spent the majority of the show laughing away. The man behind me giggled through the whole thing. I love having the Cambridge Footlights here every year, and every year they manage to exceed expectations. I sincerely hope they continue to stop in the years to come, and for those who missed this year don’t worry, they’ll be back in a mere 12 months.