Washington D.C. has its own stress culture 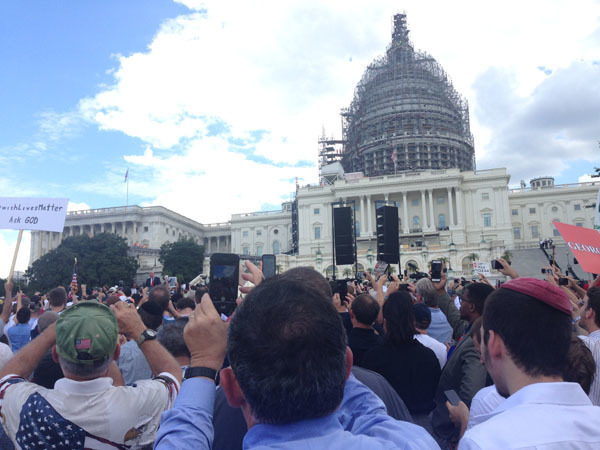 Donald Trump speaks to a crowd outside the capitol against the Iran Nuclear Deal. (credit: Amelia Britton/Assistant Copy Manager)

I don’t think I understood how a city could have a pace until I came to D.C.. There are millions of moving parts, and I feel like I’m constantly trying to catch up with them. The people I pass on the street seem so much more put together than I am, and not just because their business attire is magically intact when riding the metro in 90 degree heat. They’re smarter, more interesting, and more in control of their lives.

I’ve had office jobs before. I’ve had internships before. And yet my internship here is unlike anything I’ve ever done, because the work never actually stops. The office is constantly inundated with new information, and I’m only handling a tiny part of it. I’ll get more secure in the work over the course of the semester, but I don’t know if I’ll ever have the aura of confidence that radiates from my fellow metro riders. I have a few months to get a stronger feel for the city. I’ll come to understand the pace a little better with time.

Carnegie Mellon stress culture takes a different form here. Work-life balance in Pittsburgh revolves around campus events and social groups. Here, there is an overwhelming number of intellectual and cultural events every day, and I can never quite attend enough. I’m constantly impressed.

I went to a hearing and a briefing on the hill with interns from my office, which were both intimidating and incredibly official. The hearing discussed campus sexual assault policy, which felt important and relevant for all college students. I kept referring back to my Survivor Support Network (SSN) training. Then we sat in on the briefing about the Rethink Discipline initiative, which addressed the issue of disproportionate punishment for minority students and students with disabilities. It felt like an important issue that wasn’t getting enough attention, and yet people had devoted time and resources to it. Both events were full of people who cared about the issues and had done their research. I started to feel like experts were everywhere.

Politicians actively campaign against “Washington insiders” with every election cycle, characterizing their opponents as clueless or power-hungry. It’s easy to make fun of misguided legislation on healthcare made by non-doctors or on technology made by the tech-illiterate, but the truth is that policymakers make policy. They can’t have a background in medicine and agriculture and education — it’s the unelected people working in Washington who are advising, promoting, and crafting those policies. I met a former engineer who now serves on the professional staff for the House Armed Services Committee, specializing in nuclear weapons. Employees at federal agencies are doing the statistical analysis to support marginalized populations. These people are smart and invested in what they do, contrary to public opinion about D.C..

I’ve had so many new experiences since arriving here. They range from high-profile to small-scale, but they’ve all made me consider my own place in the city. On my lunch break last week, I walked to the lawn of the Capitol to hear Donald Trump and Ted Cruz refute the Iran Nuclear Deal. I’ve spent time in Smithsonians and got a library card from the Library of Congress. This weekend I saw a purportedly-feminist play that did a great job talking about body image and shame, even though the narrative revolved around a man. I’ve also been to discussions and debates ranging from charter schools to the Iran deal. Each of these made me think critically and carefully, in a way that I’m not used to beyond the academic bubble.

Understanding the pace of the city reaffirms the feeling that I won’t be able to catch up, but it’s still exciting to be here.