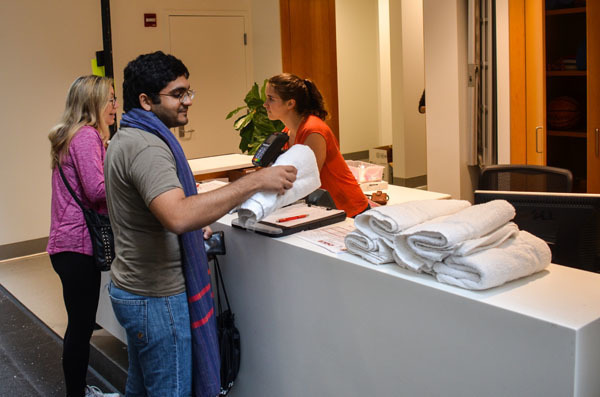 With the recent reopening of the Jared L. Cohon University Center’s (CUC) revamped athletics facilities comes many overdue state-of-the-art changes. The changes include drastically improved locker rooms, new pool ventilation, and more secure facilities, to name just a few. However, one change may not be as pleasant for many longtime patrons: the new towel purchasing and washing system.

Previously, the CUC provided all guests with a free towel service that allowed for a carefree trip to the gym: In theory, one simply had to grab a fresh towel at the start of a workout, and toss it down the laundry chute upon conclusion. In actuality, many towels were being borrowed and never returned.

Upon the reopening of the CUC, the towel service was discontinued, and as of Oct. 1, patrons will be able to purchase a towel for the year for a $25 fee, which can then be turned in for washing. In addition, the new towels will be larger and of much nicer quality than the old ones.

When asked about the new changes, Assistant Director of Athletics Sara Gaunter explained, “When we closed the facility in March, the athletics administration — as we always do — and we decided to implement the new service. Previously we were losing 12 to 15 dozen towels per month, which was not an efficient use of resources from an operations standpoint. This inefficient system had been running for at least the eleven years that I’ve been here.” Gaunter went on to tell The Tartan that the money being saved on towels will be used elsewhere in the recreation department, for things like hiring new instructors and purchasing new equipment.

While there are many upsides to the new system, frequent CUC recreational swimmer and Professor of English Kristina Straub told The Tartan via email, “It’s hard for the university to do anything right on this one. People used to complain all the time about how tiny and thin the towels were; it’s amazing to me that anyone would want to steal one.”

Straub also admitted that while she herself is not negatively affected by the new system, families that bring their children to the pool for lessons might be. “It’s one thing to organize a towel for yourself, another to organize towels for a whole family,” she said.

In addition, English instructor David Cerniglia noted the understated effect the policy will have “It seems unfair that they’re asking undergraduates who are already spending a lot of money to be here — on tuition, books, and food — to spend more money to rent a towel, especially when they’re trying to do something positive like exercise. We should be making that easier.”

On top of the economic advantages created by the new system, the school will be practicing more environmentally conscious washing methods, due to the diminished amount of water and laundry detergent needed to wash the towels. As parts of the country are ailing due to drought, decreasing laundry loads can only be a positive; the typical washing machine uses around forty gallons of water per load.

While Straub and Cerniglia bring up the inconvenient aspects of the new system, Gautner provides the counterargument. Yet only time will tell which arguments — in conjunction with the improved environmental footprint — will outweigh the others.