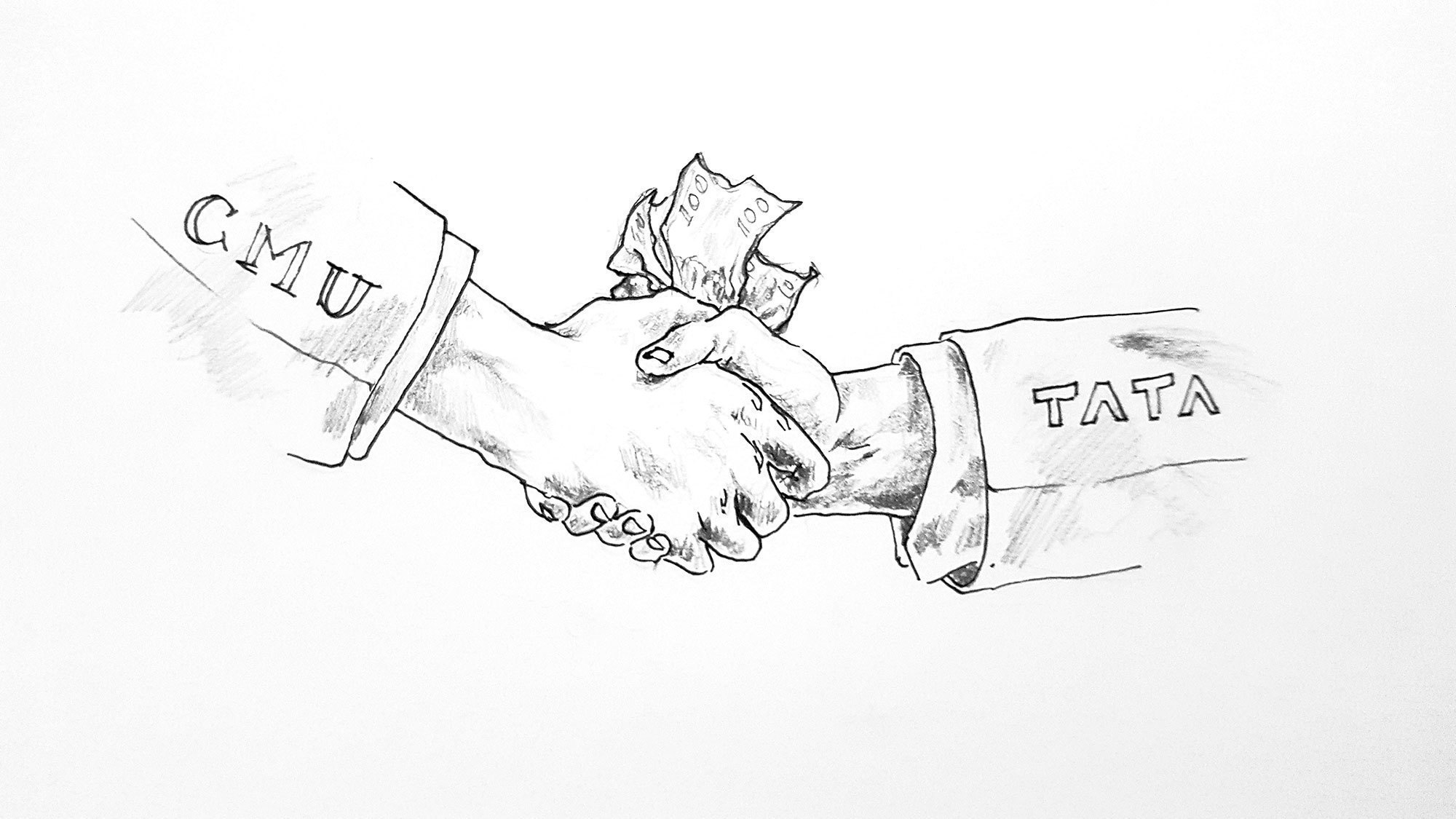 Two weeks ago, Carnegie Mellon announced a $35 million dollar donation from Tata Consultancy Services (TCS), a tech services firm based in Mumbai, India. The gift is the fifth-largest in the university’s history, the largest donation from outside of the United States, and the largest gift that the university has ever received from a corporation.

Securing funds and donations for Carnegie Mellon has been one of University President Subra Suresh’s most prominent agenda items since he took office in November 2013. Suresh has procured deals and gifts from a variety of sources, including Uber — a five-year-old ride-sharing company already worth more than $50 billion — and Legendary Entertainment, a production company founded and chaired by Carnegie Mellon trustee Thomas Tull.

Many of these donations are providing funding for the upcoming Tepper Quadrangle, an ongoing project that will turn what is now the Morewood Gardens parking lot into a brand-new space for university-wide learning and collaboration. The project was kicked off by a $67 million donation from David Tepper (GSIA ’82), announced the same day as Suresh’s inauguration ceremony.

All of these donations are good for Carnegie Mellon’s national and international reputation, gradually bringing it closer to Ivy League schools like Harvard University, which received a $400 million donation this summer — its largest ever. More money is rarely a bad thing: Carnegie Mellon, like many United States institutions of higher education in recent years, is chronically underfunded.

Many of the gifts that Carnegie Mellon has received since Suresh took office, however, have come from financially powerful corporations built on ethically shaky foundations. TCS, for example, has recently come under fire for exploiting U.S. Department of Labor policies to replace American workers with foreign-born employees on temporary H-1B visas.

While this is a nuanced and contentious issue, TCS is playing into a flawed system by exploiting foreign-born workers — many of them from India — as part of lucrative deals with American companies who lay off thousands of American employees so that they can be replaced with relatively low-wage foreign workers. The recently laid-off employees are often forced to train their replacements, who in turn are underpaid and overworked. The system benefits no one but the companies responsible for the new contracts — companies like TCS.

Likewise, Uber has made a name for itself in its short history by strong-arming local and national governments to assert its dominance. Whether or not you support the so-called “sharing economy,” it’s undeniable that Uber’s business practices have been questionable at best.

Although Uber was officially legalized in Pittsburgh six months ago, the company had continued to operate after a cease-and-desist order from the city’s Department of Transportation. Uber has also aggressively infringed upon the business of its largest competitor, Lyft, and was recently embroiled in a controversy after being faced with a class-action lawsuit from its drivers over their status as contractors, not employees.

It should have come as no surprise, then, when Uber immediately poached around 40 of Carnegie Mellon’s top roboticists from the National Robotics Engineering Center (NREC) after entering into a partnership with the university in February.

Last week, Uber announced a $5.5 million donation to the university, which many see as belated compensation for the brain drain caused by the partnership. Although the Uber-Carnegie Mellon partnership was ostensibly for the purpose of furthering research on self-driving vehicles, it sometimes feels like even the architects of the deal aren’t sure what the terms are.

Carnegie Mellon has marketed the recent partnership with TCS as an opportunity for students to work with the internationally known tech company and create a "lasting impact."

“As global leaders, Carnegie Mellon and TCS have the intellectual power, creativity, institutional nimbleness, and global reach to capitalize on new opportunities and have a lasting impact on society and industry through cutting-edge digital research and a long-term commitment to education,” TCS CEO and Managing Director Natarajan Chandrasekaran said in a university press release on the subject.

Still, it’s hard to see how the partnership will directly benefit students. The university’s lack of fiscal transparency makes it difficult to follow the money, and even more difficult to see how these donations improve the lives of Carnegie Mellon students. Suresh said, for example, at the university event announcing the donation, that the money will go toward the creation of the Forbes Avenue “innovation corridor,” part of the university’s planned expansion that remains wrapped in abstraction and hyperbole.

Although some of the money is going toward more immediate goals, like the endowment of presidential scholarships and building the new facilities of the Tepper Quadrangle, few of these projects have immediate, tangible impacts on student life. Often, Carnegie Mellon focuses more on using high-minded, empty rhetoric to please corporate sponsors than on the heart of the university — its students.

The university is also facing the problems inherent in corporate-academic partnerships and the clashing ideologies of free market-driven, globalized companies and the (theoretically) purely research-driven university. Can anyone really blame Uber, for example, for acting in its own best interest by offering higher salaries to Carnegie Mellon roboticists, many of whom are world-renowned leaders in their fields?

Corporations have a vested interest in doing what’s best for their bottom line, while universities work toward intellectual goals, regardless of profit. These lines are becoming blurred, however, as Carnegie Mellon begins more and more to resemble the corporations that it feeds off of.

The size and frequency of donations to the university are an important metric on many best-of lists — notably the U.S. News and World Report’s well-respected university rankings — but it’s frustrating that Carnegie Mellon is focusing on garnering donations from companies, rather than focusing on the welfare of its constituents. Carnegie Mellon needs to build its reputation from the ground up by strengthening its academic programs and catering to those who pay to attend the university: the students.