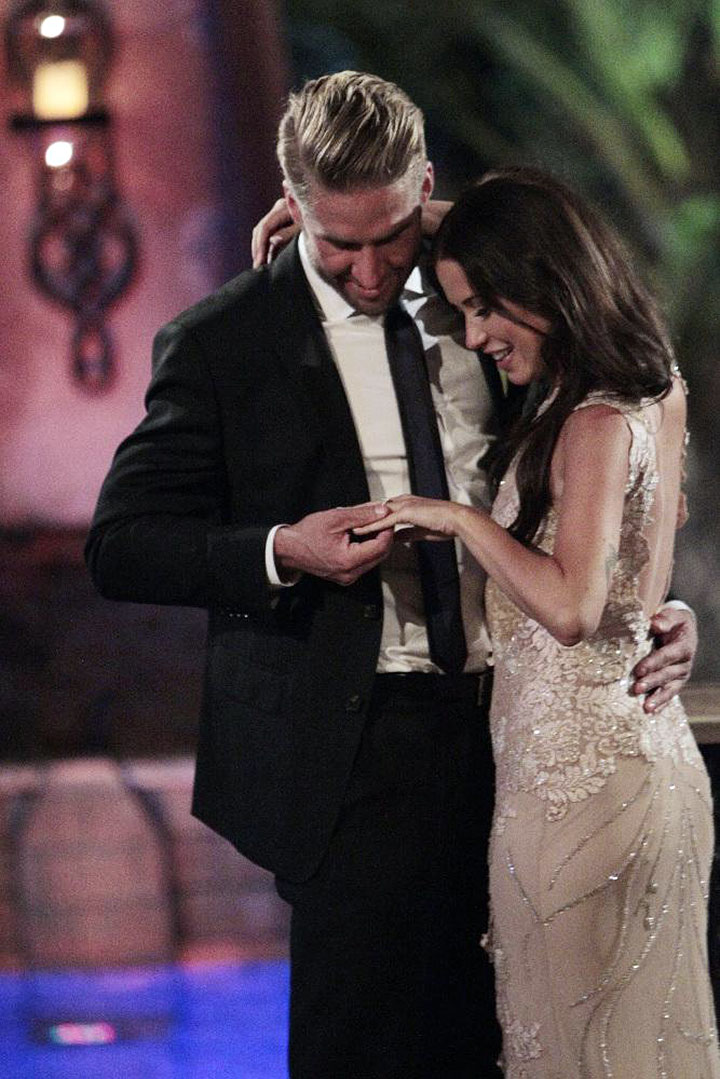 Kaitlyn Bristowe, the star of this season’s Bachelorette, and the focus of this summer’s controversy, accepts a ring from the winner of her season, Shawn Booth. (credit: Courtesy of Wikimedia Commons)

ABC’s The Bachelor franchise is one that continues to endure years after its conception. A show in which one individual seeks true love by combing through and kissing a wide variety of impossibly beautiful suitors, The Bachelor and its spin-off The Bachelorette have a devoted fan following and viewership continues to skyrocket. As one of the franchise’s devoted fans, I am overeager when it comes to trying to predict the winner, avoiding online spoilers, and grabbing snacks for viewing parties with friends, but I also spend time thinking about the issues that are front and center within the franchise, including diversity issues. There is little to no diversity, and there hasn’t been since the nation’s introduction to The Bachelor, The Bachelorette, or any other spin-off show.

This summer’s bachelorette was no exception. In fact, since the beginning of the show twelve years ago, only one star, of either The Bachelor or The Bachelorette, was a person of color. After a rise in the number of contestants of minority backgrounds in the 2013 to 2014 seasons — to two or three out of roughly 30 — that number has once again slipped to one or two per season. Even then, minority contestants are almost always voted off immediately. During Chris Soules’ season last winter, Saturday Night Live aired a skit making fun of diversity issues on The Bachelor, claiming that all individuals of color were voted off by the fourth week. It’s hard to understand why, in this day and age, ABC and franchise producers find it challenging to come up with a diverse cast. In fact, The Bachelor has faced two separate lawsuits relating to problems of diversity by potential contestants. The franchise, however, sticks by its First Amendment rights to cast whoever it wants on the television show.

The show is also exclusively heteronormative. There is nothing wrong with a male bachelor looking for love from a big group of women — besides, you know, how weird a situation it is — but after 12 years and almost 20 seasons, it is necessary and important to have a bachelor or bachelorette contestant who identifies as bisexual or gay. As a huge cultural staple, whatever that says about our nation, it would be my hope that this bizarre and ridiculous television show could attempt to represent more Americans.

This season’s bachelorette was Kaitlyn Bristowe, a dance instructor from Vancouver, whose funny laugh and inappropriate jokes made her a favorite contestant from Chris Soules’ season. While diversity issues persisted, Kaitlyn’s season was able to address a serious issue that came up during the course of the show’s run. While the show does not shy away from showing some pretty serious make-out sessions, the topic of more “serious” hook-ups, and sex, go unspoken.

Toward the end of each season, the last few remaining contestants are allowed to spend a night in the “fantasy suite” with the Bachelorette. This is a chance for them to spend the night together and have some off-camera time, and, presumably, sleep together if they so desire.

While this is the implication, Bristowe is the first bachelorette to admit to sleeping with someone on the show, in an episode where she slept with one of her potential suitors halfway through the season. This generated a lot of hate mail for Bristowe, and a lot of wildly offensive slut shaming from the American people. In the “After the Final Rose” special, an episode that airs after the bachelorette has picked a man, Bristowe and host Chris Harrison shared a lot of the terrible tweets and messages that Bristowe had received as a result of her confession. While reading them out loud on live television was a bit of a strange choice, the amount of positive feedback and support for Bristowe was impressive. Bristowe defended her actions and her decisions with poise, and called out her haters for their bigoted, shameful, and hateful comments.

I felt that this demonstrated the power of the bachelor and bachelorette, and the show itself, to enact change and open people’s minds. Even more than before, I feel like this shows the untapped potential of The Bachelor and The Bachelorette. I think people often feel as though reality shows need to be pure fluff, or that a stupid premise begets a stupid message. I don’t think reality television show producers should be resigned to making a show that’s all pretty people and no substance. While I don’t believe that The Bachelorette will all of a sudden blossom into a show that preaches love and kindness and depth of emotion, I do feel like there is a way to turn this side of pop culture into a place where other Americans can see themselves and important issues can be addressed. Then I would love these shows even more.