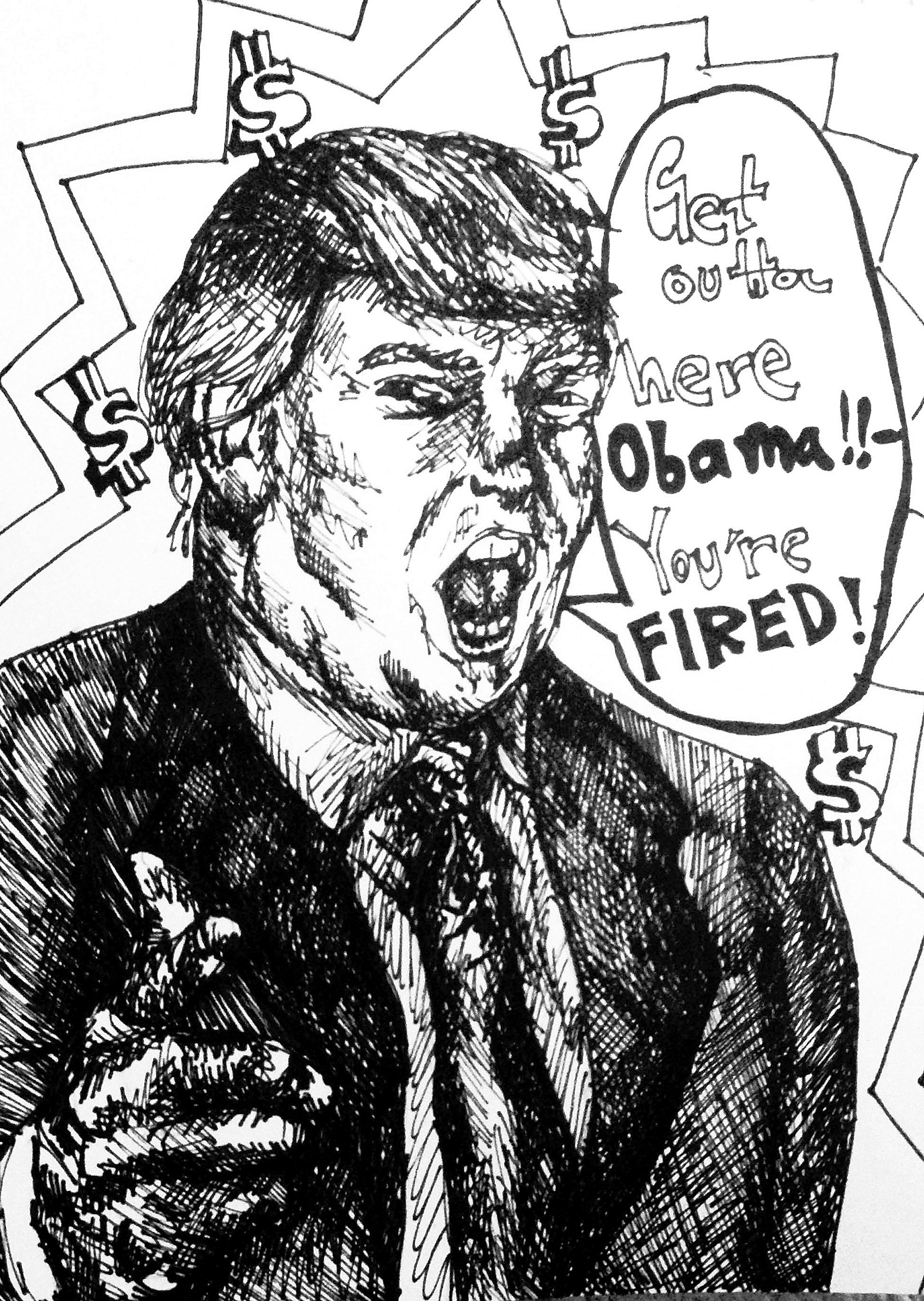 Donald Trump is the kind of president who would start a nuclear war with Kim Jong-Un over a spat about whose hair is dumber. Why then is he leading the polls among the Republican candidates? I assumed at first that it must be the work of a group of political trolls, like the people who wrote in Darth Vader as a candidate for Ukraine’s prime minister. However, there seem to be a number of people who sincerely support Trump, which completely baffles me. Here are my best guesses to what constitutes Trump’s appeal.

Trump has always been known for his talent of shameless self-promotion, and is undoubtedly the most famous of all the 28 declared GOP candidates. As such, it is no mystery why Donald Trump has had more media exposure than any other candidate in the election.

Through Trump’s personal celebrity may explain his appeal to some uninformed or disinterested voters, Trump’s popularity among active, discontented voters is the most confusing aspect of his candidacy. I understand the anger over the entrenched, do-nothing political establishment.

I, too, feel that politicians these days are disconnected from average Americans, and that bold visionary leadership is necessary to change the state of American politics. With that said, why is Donald Trump the man some voters want to represent that discontent?

The Atlantic published a letter from a supporter who called Trump “authentic.” This is a valid point. Donald Trump is authentically an obnoxious, mean-spirited moron; he spews out whatever stupid thought is on his mind with no filter. As an alternative to the sterile, politically correct statements of most mainstream politicians, it may feel refreshing at first but surely this schtick must become old within a month or so.

Other than his brashness, Trump has very little to offer. He has no political experience, can’t take any form of criticism, and is massively uninformed about policy. He honestly thinks deporting all the illegal immigrants in the United States is an easy process, it’s just that we haven’t done it yet. Trump supporters often cite his business leadership, but this is questionable. Say what you will about Mitt Romney and his robotic personality, but at least Romney seems like he has the maturity and intelligence to excel in business. What other Fortune 500 CEO in the United States behaves like Trump? Despite running a billion dollar empire, Trump apparently has the time to engage in petty public feuds and frivolous lawsuits; he once filed a defamation suit against an author who wrote that Trump was a millionaire instead of a billionaire. Furthermore, it is very telling that four of Trump’s major enterprises have declared bankruptcy in the last 25 years.

Unfortunately, the main basis of Trump’s support seems to be the xenophobic narrative he has put forward. Trump’s campaign to “Make America Great Again” is solely based on stopping illegal immigration. He has said next to nothing about education reform, income inequality, or foreign policy positions, among countless other important issues. This less than subtle scapegoating becomes particularly egregious given that in the past 10 years, the illegal immigrant population has declined from its 2007 peak, according to Pew Research.

The fact that such a transparently xenophobic platform has gained such a large following in America is highly disturbing, especially in the wake of the recent incident in Boston in which two brothers beat a homeless man simply because he was Hispanic. According to The Atlantic, one of the assailants cited Trump as an inspiration behind the attack.

Donald Trump’s rapid rise in politics is deeply unsettling in terms of what it says about certain segments of American society: the unquestioning acceptance of shallow political theater, the mob-like anger at the American political system, and the discomforting xenophobia that somehow still persists in a nation of immigrants. Even if Donald Trump fails to secure the GOP nomination, these attitudes won’t go away so easily and will be highly influential on national politics in the years to come.