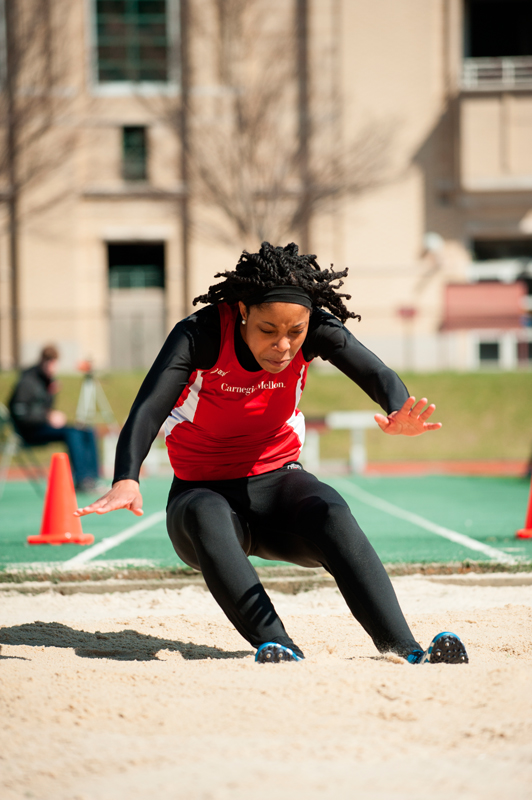 Sasha Spalding braces herself as she lands in the long jump. (credit: Matthew Nielsen/) 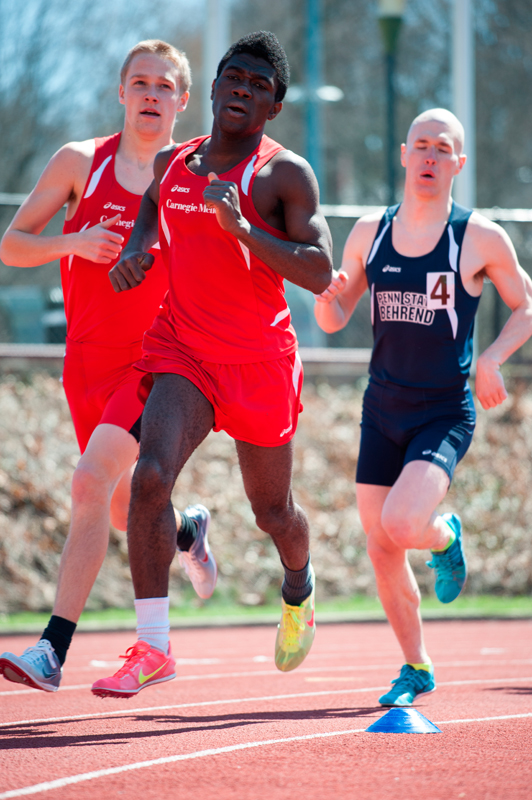 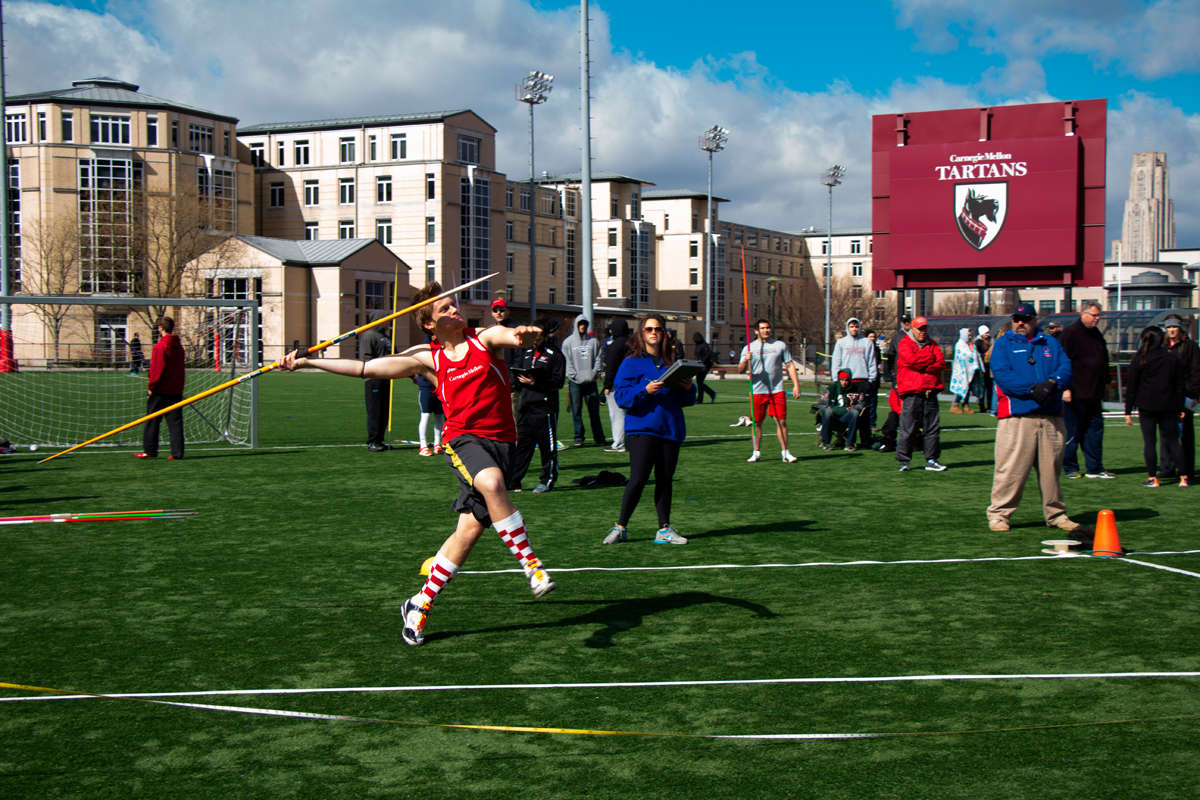 It seems quite fitting that after a week of dismal weather, the sun rises on our athletes as they go out to shine in the 2015 Quad meet featuring athletes from four schools (Pennsylvania State University: Behrend; Westminster University; Carnegie Mellon University; and Washington and Jefferson University).

The first major event of the day was Men’s Javelin Throw and while — for the most part — the only challenge seemed to be following the javelin as it went into the sun, the wind (traces of Pittsburgh’s harsh winter) caused many foul throws. The event was certainly not lacking in intensity or competition however, with each thrower putting it all on the line — creating an atmosphere that would carry on for the rest of the meet. In the end however, it was a competitor from Penn St. that stole the day with a throw spanning a whopping 60.25m. Carnegie Mellon’s best performances came from sophomore David Ott (5th place with 44.72m) and first-year Jacob Schofel (6th place with 44.67m).

Next up was Men’s Long Jump, which saw a Westminster competitor jump a jaw-dropping 6.33m to achieve first place. Carnegie Mellon sophomore Donald Boyer and first-year Andrew Lee were not far behind placing third and forth place respectively with jumps of 6.24m and 6.12m apiece. Men’s Shot Put again saw Penn St. place first with an astonishing throw ranging 14.55m. Carnegie Mellon first-year David Trzcinski held his own, placing third with a throw distane of 12.73m.

Penn St. dominance in the throwing events carried over to Men’s Pole Vault as a competitor stunned the crowd with a leap of 4.33m. With the exception of Westminster junior bagging second place with a jump of 4.18m, the men from Penn St. nearly filled the table, leaving Carnegie Mellon sophomore Kyle Weaver at sixth place with a jump of 3.58m.

The men from Carnegie Mellon, however, were far from done and they came back with a terrific performance from all their athletes in Men’s Hammer Throw with all their competitors nearly filling the rankings. Schofel came into his own with a stellar throw of 44.96m. Junior Paul Hamerski placed a solid second with his distance of 39.04m. Also performing well during the event from Carnegie Mellon were sophomore David Ott, Trzcinski and sophomore Jacob Brooks.

The Men’s 3000 Meter Steeplechase held the bar set in the Men’s Hammer Throw as Carnegie Mellon held on to the first and second places with great performances from sophomore Curtis Watro and senior Elliot Watson, notching times of 9:54.58 and 9:58.65, respectively.

The Men’s 100-Meter Dash is always one of the most anticipated events at an athletic meet and it certainly did not disappoint today. Despite fierce competition and crippling pressure, a Westminster competitor placed first with a time of 11.23 seconds to cap a breathtaking performance. Sophomore Matthew Sheh’s time of 11.87 seconds put him in sixth place, which should be a clear indicator of the difference between the competitors and the thrilling the performance.

There were few events at the meet that saw more preparation go into them than the Women’s Pole Vault. Everything from the tension among the competitors to the vehemence of their practice routines set the tone for a truly spectacular contest. While each woman pushed herself to the limit in the event itself, all of them aiming for perfection, it was a sophomore from Westminster that stole the show with a remarkable leap of 3.43m that simply left her untouchable by the opposition. Carnegie Mellon did maintain a presence in the event, with sophomore Grace Yee notching a 2.98m leap to put her into fourth place.

Carnegie Mellon headlined the Women’s Long Jump, capturing both the first and second places. Senior Sasha Spalding thrilled the crowd with a jump of 5.23m, putting her far ahead of her competitors. First-year Luise Bering put forward an impressive performance as well with a jump of 4.77m.

Spalding continued to hold the Carnegie Mellon banner high in the Women’s Shot Put as well, notching a throw of 11.09m that was well ahead of second place which was awarded to a throw of 10.66m. Spalding placed second in the Women’s 100m Dash with a time of 13.24 seconds, making her an athlete unlike any other with excellent placements in throws, jumps, and runs.

The Women’s 800-Meter Run saw the true capability of Carnegie Mellon’s women’s athletics as the Tartans occupied 8 of the top 12 positions. Junior Erin Kiekhaefer headlined the performance with an awe-inspiring time of 2:18.87 followed swiftly by first-year Sarah Cook with a time of 2:19.32.