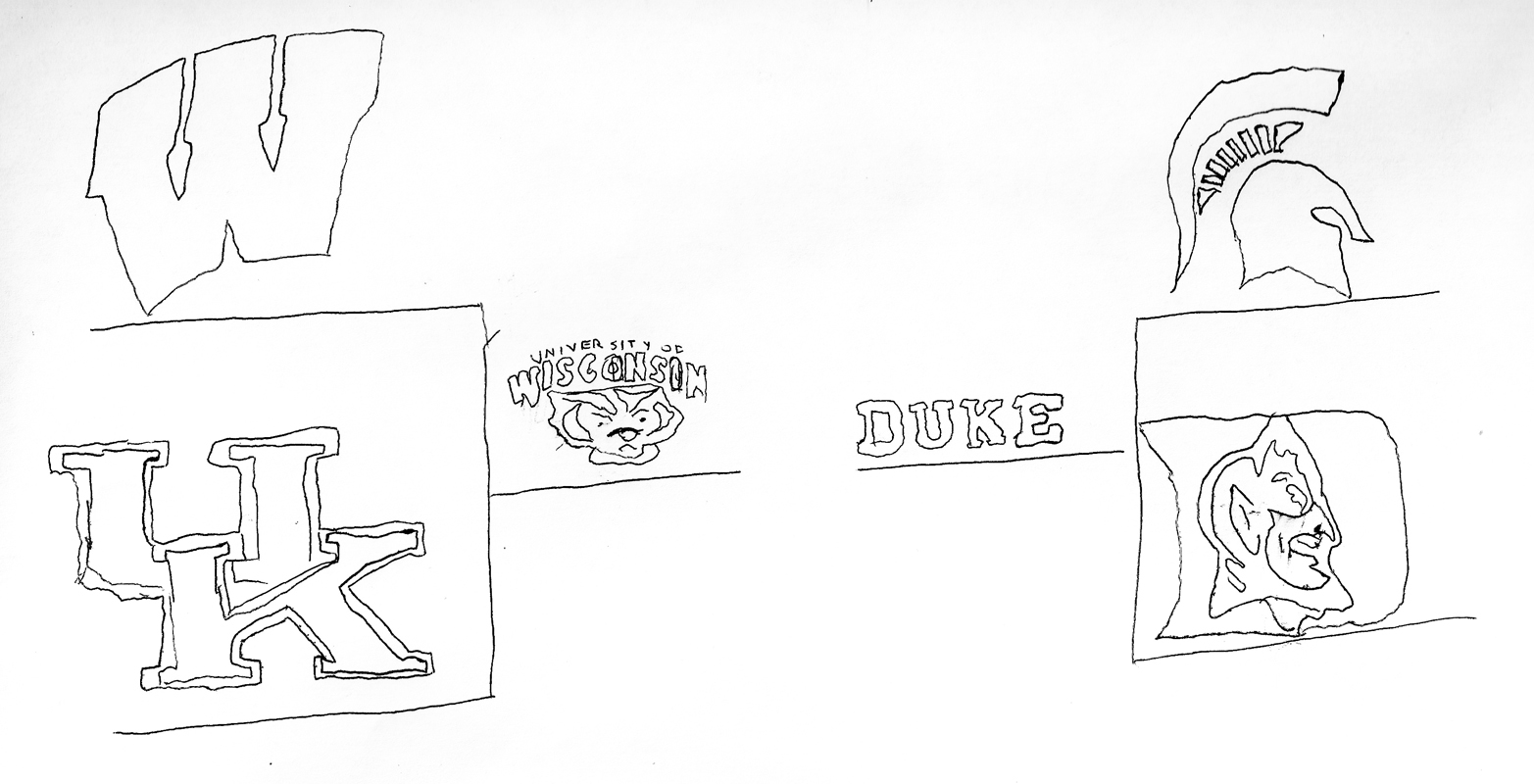 The Final Four of the National College Athletic Association (NCAA) Division 1 Men’s Basketball Championship is over, and with it the Kentucky Wildcats’ 38-game unbeaten streak for the season. Let’s recap the two semifinal games before looking at the final game of March Madness 2015.

There was a consensus that the brilliant offense of Duke, provided largely by first-year stars Jahlil Okafor and Justise Winslow, would face a tough test in Coach Tom Izzo’s Spartans, but eventually pull through. What we saw was a repeat of the defensive intensity shown in the Regional final against the Gonzaga Bulldogs, where Duke’s perimeter players harassed Michigan State players as soon as they stepped into the half court to severely limit the Spartan offense. Winslow was especially impressive as opponents shot 1–7 with him as primary defender in the first half as Duke built their lead. Okafor did his usual work on the block as he used his massive size to his advantage over smaller defenders to score easy buckets. There was too much firepower in this Duke team for Michigan State to stand a chance, as shown by the emotion in the players after first-year guard Grayson Allen threw down a huge dunk off his own missed three-point shot in the second half and role players like center Marshall Plumlee stepped up to ensure the lead was not reduced against reserves. The end result was an easy 20-point victory for Coach Mike Krzyzewski’s team as he gets a shot at his fifth national title and the first since 2010.

The entire nation was waiting to watch this game, a rematch of last year’s thrilling semifinal.

There were several storylines that were spoken of before the beginning. Bo Ryan and John Calipari go head-to-head in a matchup of two of the best coaches in basketball right now and as finalists for the Hall of Fame this year. No one has been able to stop Wisconsin senior center Frank Kaminsky this season, but he hadn’t faced defenders like junior forward/center Willie Cauley-Stein and first-year forward Karl-Anthony Towns yet. Wisconsin junior forward Sam Dekker had shot lights out in the tournament till now, but no one knew how he would fare against the length of another mid first round projection in first-year forward Trey Lyles.
These two teams combined are expected to have 6 players going in the first round of the NBA draft. Players’ draft stocks depended on this game.

The flow of the game wemt largely as predicted as each team made their runs and took brief leads before the other came storming back to level it up or take the lead themselves. The stifling Kentucky defense looked lost at times against the extremely well-spaced Badgers offense with no one in their star front court rotation able to handle Kaminsky down low or at the three-point arc. Kentucky was shooting above 60 percent for most of the game, though, so they were able to keep up with the quick scoring of the Wisconsin offense to whom they were surrendering a lot of offensive rebounds and second chance points.

The dominant play of Kentucky began to show up and they were leading 60–56 and in control of the game with only a few minutes remaining. Wisconsin turned the tables though, turning up defensively with Kaminsky and Dekker playing their part in limiting Kentucky’s several options. Sophomore guard Aaron Harrison air-balled a three with the Badgers leading 68–64 with less than 10 seconds remaining and Wisconsin iced the game at the free throw line as they became the first team to beat the Wildcats this season.

In a matchup of what are probably the two best offensive teams in college basketball, the difference will come down to who has the better defense on the day. For a large part of the season, most viewers assumed that Wisconsin is better there and would possess the advantage in this matchup, but the last two games have shown that Duke can really step up their defensive intensity when required. The most fascinating battle will be between the two of the NCAA’s best centers in Okafor and Kaminsky. One of the biggest reasons Kaminsky came back to Wisconsin after last season was to prove that he could win a title for the Badgers and Bo Ryan. To do that he will not only have to score for his team, but also work tirelessly to defend the dominant Okafor. Okafor has not seen a match for him yet this season and the nation was hoping to see him take on Cauley-Stein or Towns, but Kaminsky is a formidable opponent. Okafor will also struggle defensively as he tries to chase Kaminsky and sophomore forward Nigel Hayes around the perimeter from where they are both excellent shooters. Wisconsin has a huge size advantage over Duke, but the Blue Devils’ aggressive trapping scheme has proved to be very effective in pressuring teams into taking bad shots or turning the ball over.

Another battle scouts are salivating over is the clash of Dekker and Winslow. Both have overshadowed their star centers this tournament as they have shot lights out from deep and, in Winslow’s case, been extremely good on defense as well. Dekker could increase his draft stock with a strong showing against probably the best wing in the current draft class, whereas Winslow is already being projected to be a pick in the 5-8 range after the Towns, Okafor, point guard Emmanuel Mudiay and Ohio State freshman point guard D’Angelo Russell quartet. Their contributions on both ends of the court will be vital if their team is to win the championship.
Finally, it all comes down to last clash, which is between two legendary coaches in Wisconsin’s Bo Ryan and Team USA and longtime Duke coach Mike Krzyzewski.

Coach K has reached this stage eight times before and won it four times. He is widely known as one of the best college coaches of all time. Ryan has shown he is no slouch as he’s already outwitted a coach of Kentucky’s John Calipari’s caliber to get here. As Wisconsin guns for it first title in 74 years, Coach K and the Blue Devils will try to ensure they have to wait at least one more year.