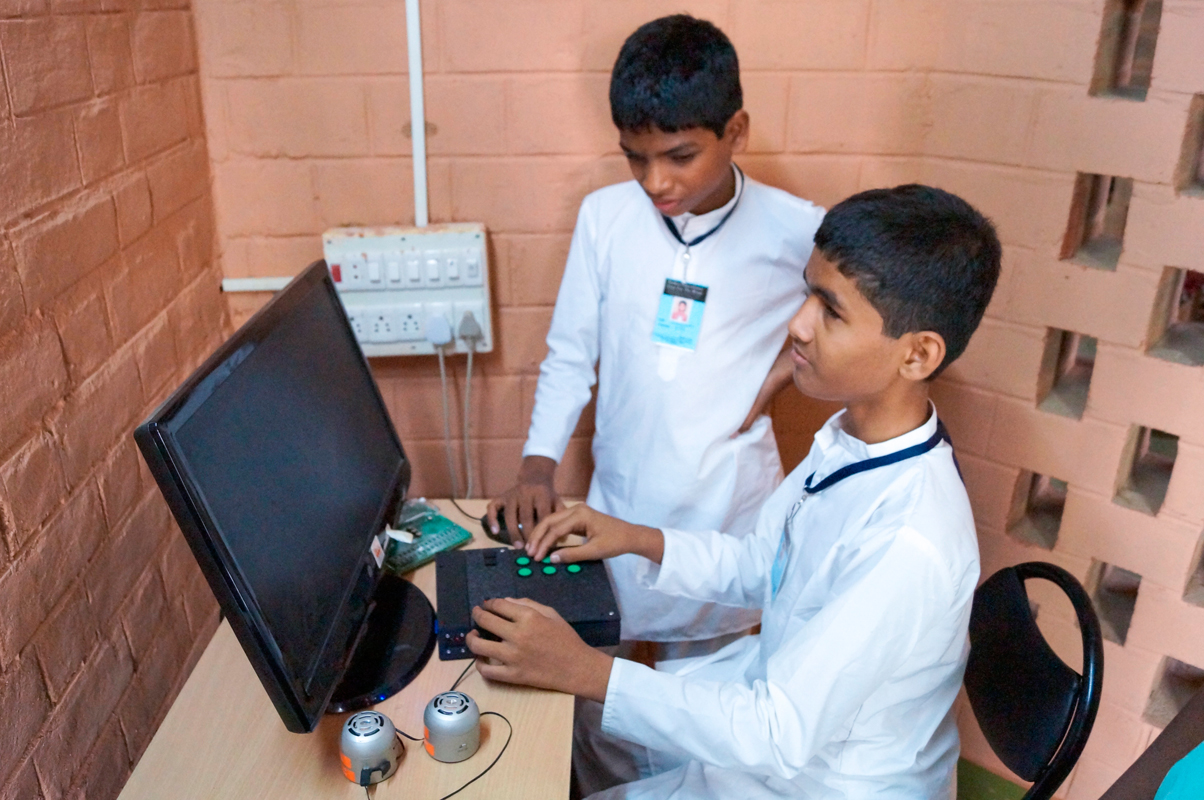 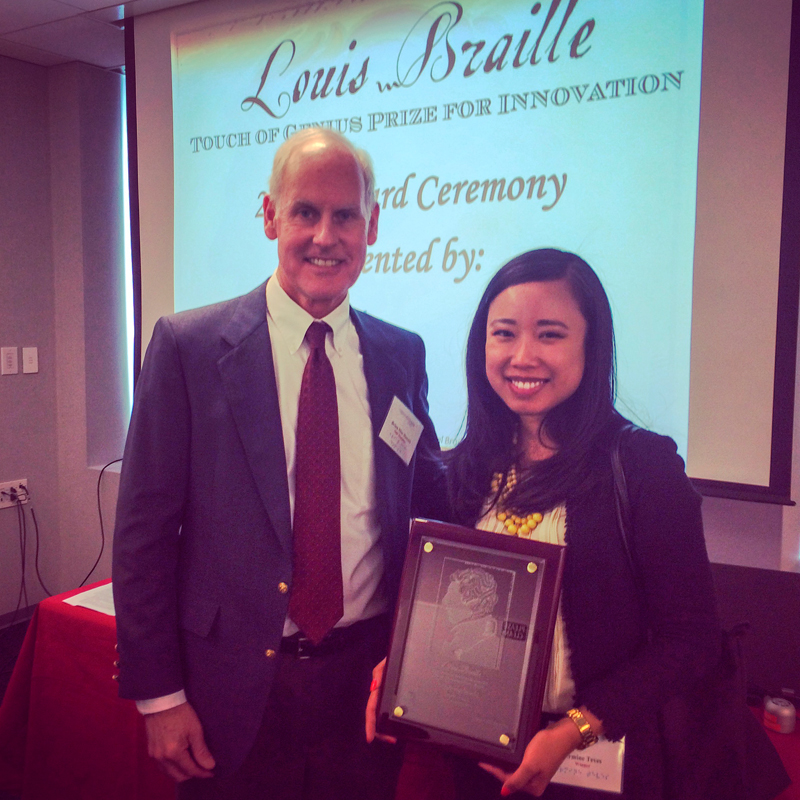 Ermine Teves, the project manager for the Automated Braille Tutor, accepted the Touch of Genius Prize on behalf of TechBridge World, from Brian MacDonald, president of the National Braille Press. (credit: Ermine Teves)

TechBridgeWorld, a research group under Carnegie Mellon University’s Field Robotics Institute, received the Louis Braille Touch of Genius Price for Innovation for the year of 2014. The $20,000 prize is distributed to multiple organizations and individuals every year in hopes of honoring those who implement innovative technologies to help improve the field of tactile literacy. The Automated Braille Tutor, developed by students and researchers in TechBridgeWorld, was awarded $15,000 out of the $20,000 for its developments and impact on partnering institutes from around the world.

TechBridgeWorld was founded in 2004 by M. Bernardine Dias, an associate research professor in Carnegie Mellon’s Robotics Institute. The goal of this research group aims to blend together advancements in technology and their implementations in lesser known communities. In particular, TechBridgeWorld focuses on helping people who live in developing countries and people with disabilities in the areas of education and assistance.

The Automated Braille Tutor exemplifies a blend of these two fields by providing assistive technology to those who are blind to help improve literacy. Other projects that TechBridgeWorld has been involved with include NavPal, a mobile application aimed to help aid indoor navigation for blind and deafblind users, and Assistive Robots for Blind Travelers.

The Automated Braille Tutor project was started in 2006 by two robotics Ph.D. students, Nidhi Kalra and Tom Lauwers. Initially, the two students were invested in this project as an independent study through TechBridgeWorld. Kalra and Lauwers contacted and tested the tutor on students in the Mathru School for the Blind, in Bengaluru, India. Teachers and students had positive feedback toward the proejct at the time. Over the years, due to its success, the study has been kept alive and continues to live through the support of students at Carnegie Mellon.

The first tutor device developed connects to a USB port on a laptop. The board has typical buttons that allow users to navigate through menu options, an enlarged center Braille cell, and a bottom slate portion with multiple Braille cells that mimic the typical Braille slates that are used with a stylus. Once the device is turned on, students hear instructions from the device teaching them about topics such as the alphabet, spelling, and numbers. The tutor’s software also implements the built-in voice of a Mathru teacher, who provides feedback to the actions of the student. For example, if the device was running through the alphabet, the automated voice would direct the student to press particular cells to spell out the respective letters.

An important aspect to keep in mind is that in order for blind people to write, the construction of Braille writings need to be punched in from right to left with each letter’s mirror image. Once the writing is complete, the paper can then be turned over so that the tactile feedback can be read from left to right.

The use of the Braille Tutor not only benefits blind students by improving their literacy, but also entertains them. For example, the “Animal Game” plays an audio clip of the noise an animal makes, and in response, the student spells out the name of the animal that made the noise. Project manager of the Automated Braille Tutor, Ermine Teves, states that, hopefully, “giving them the means to enhance their literacy will allow them to become active members of society.”

With a better understanding of reading and writing, blind people can pursue higher education, help teach others who are blind, and hold industrial and technical positions similar to those without disabilities. In general, the device has been received well by both students and teachers. For teachers, “the idea here is not to replace them,” Teves said. “We want to make their lives easier.”

Most teachers in Mathru are blind themselves, often making the process of teaching literacy difficult without any technical assistance. The need for a teacher to provide feedback to every student would not only be very time consuming, but would also cost a lot in terms of the financial investment in Braille paper.

Over the years, teachers and students have provided TechBridgeWorld with feedback on how to improve the design of the tutor. The most demanded request was a device that worked independently from a laptop. Since then, progress has been made with Stand Alone Automated Braille Tutors. A functional beginner’s device has been implemented and serves as a prototype, whereas intermediate and advanced tutors will be explored in the future. These standalone devices are powered by batteries and connect to mobile speakers to allow for mobility and ease of access.

Both undergraduate- and graduate-level students are involved with TechBridgeWorld. Innovative Student Technology Experience (iSTEP) is a 10-week summer internship program for TechBridgeWorld that heavily involves technology’s impacts on outside connections.

Although 2015 will be the last year that iSTEP will be offered, the group of four students participating in the internship will work on furthering the research for the Automated Braille Tutor. The upcoming iSTEP team will pursue comparative user studies this summer to continue to enhance the new devices in Mathru.