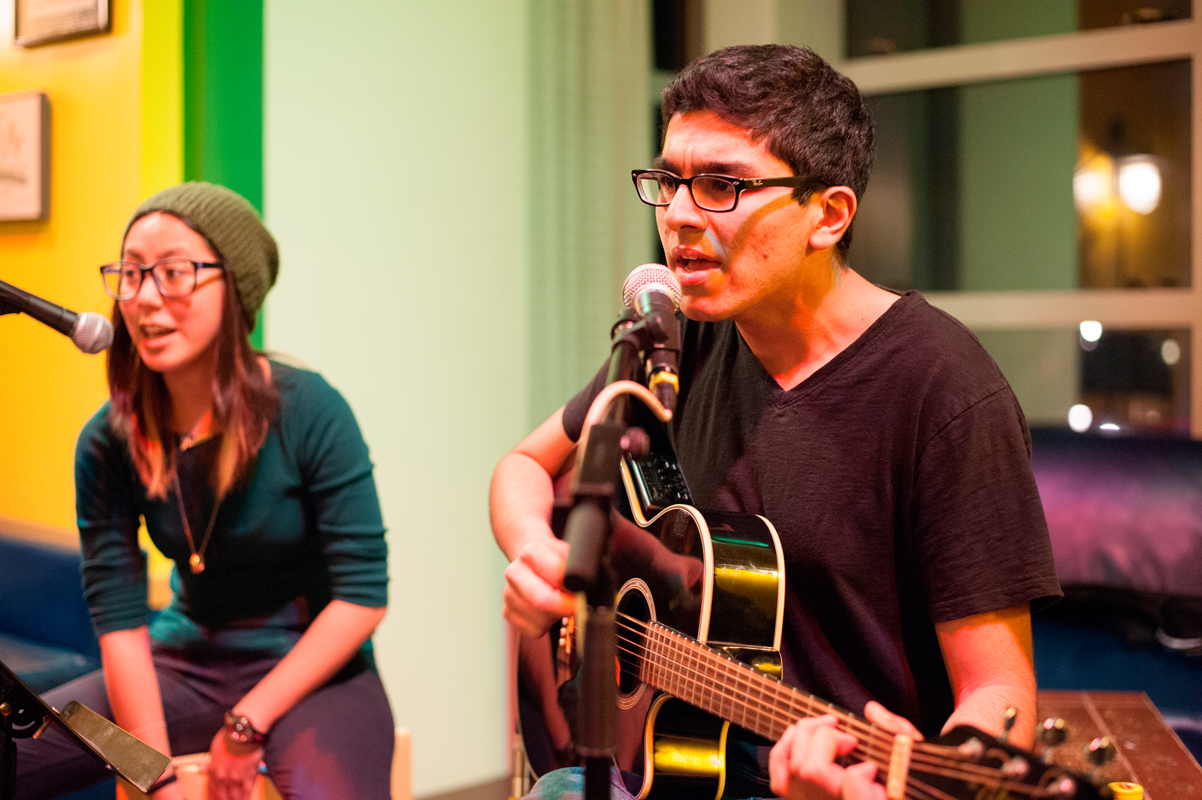 First-year mechanical engineering major Varun Gadh combined his fresh-sounding voice and musical talents with a variety of other performers during his set. (credit: Matthew Nielsen/)

Skibo Café isn’t the first place you’d expect to hear live, soulful, acoustic renditions of some of your favorite songs. And yet, a small musical miracle occured last Thursday evening, when Skibo played host to a smattering of independent campus musicians, all of whom played their hearts out in an attempt to enthrall those lucky enough to be present. Some of the music was utterly breathtaking and some of it comparatively ordinary. The sheer intimacy of the setting, however ensured one thing: All of the music was brutally honest. The entire evening felt more like a bunch of close friends just messing around on stage with their instruments than artists performing at a concert.

Although called “Activities Board Presents: Varun Gadh,” the evening was really about so much more than just one guy. He was joined on stage by several others through his set, including an extremely talented percussionist, a female lead who completely stole the show while on stage, and two violinists for the grand finale of the evening. Not to mention, he was opened for by a spectacular duo that played for quite a while — probably more than half an hour.

Sophomore ethics, history, & public policy major Dhruva Krishna and first-year international relations and politics major Dave Matvey seemed so at home on stage that I found it hard to believe them when they told me they don’t routinely perform together. They had the kind of chemistry with each other and the audience that simply cannot be manufactured or practiced. It turns out that they were simply doing the Skibo thing as a one-off for Gadh. When I told them I’d be writing a review, and asked them to name themselves for my benefit, they went with “Benjamin Piatt Runkle,” in a show of extreme reverence for one of their Sigma Chi fraternity co-founders.

They were outstanding as individual musicians as well. Krishna is obviously a very good guitarist, yet his method is restrained and measured in a way that doesn’t make his talent instantly apparent. As a result, although his chord work has no shortage of character, it allows Matvey to take the lead with the vocals. Dave has all the charisma a frontman needs and then some. He effectively channels a combination of Kurt Cobain, Dave Matthews and Jason Mraz. This works really well, as it allows him to switch from rebellious and brash to sensitive and caring at the shift of a chord. Half an hour later, by the time Benjamin Piatt Runkle left the stage, expectations for Gadh were sky high.

Coming on stage with his percussionist, first-year economics major Ariana Mapua, freshman mechanical engineering major Varun Gadh started out with an original called “Shadow On The Wall.” “Shadow” is a fine song, with some amazing lyrics and what seemed like an unusual time signature. And yet, both he and Mapua seemed somewhat nervous and withdrawn throughout the song, as if they were still warming up to the stage. They weren’t as comfortable in the spotlight as the previous duo, and were trying visibly harder to please the audience. While it took them another couple of songs to get in the mood of things, there was no looking back once they did. What soon followed was an amazing cover of Bill Wither’s “Ain’t No Sunshine.”

The two of them play off of each other’s styles well. Gadh has a fine singing voice, and he knows which directions he can take it in without pushing too far. Ari effectively fills in the spaces he leaves behind with some genuinely stunning fills on her Cajon. One of their standouts was the difficult bridge from “Sunshine,” which started simple before building into a grand crescendo, following a crash and leading into the chorus — they completely nailed it.

The indisputable highlight of the evening, however, was when sophomore vocal performance major Mara Yaffee joined Gadh about halfway through the evening. The way they played, the way their voices harmonized, and the way their every move seemed to fit in lockstep was a sight to behold. Watching them play, I got the feeling that they were playing more for the fun of it, and for each other, than for the audience. They opened with a haunting acoustic cover of Soundgarden’s “Black Hole Sun.” “Black Hole Sun” is not an easy song to cover. These guys didn’t just cover it, they went ahead and changed it up. It takes no small amount of courage to do that. By the time they closed with Simon & Garfunkel’s “Mrs. Robinson,” they had won nearly everyone in Skibo over with their earnestness and charm. Although the finale was yet to come, the evening undoubtedly crescendoed with Yaffee’s time on stage.

The finale itself was underwhelming. The two violins that joined Gadh and his group onstage were completely drowned out by the guitar, since they hadn’t been set up all that well. I couldn’t make out much of the lyrics or vocals either. But by that point, it didn’t matter. Opening your heart up to strangers is supposed to be one of the most difficult things in the world. I’d just seen strangers open their hearts up to me and about thirty more people, through music. Although the evening wasn’t perfect, it was most definitely inspiring.