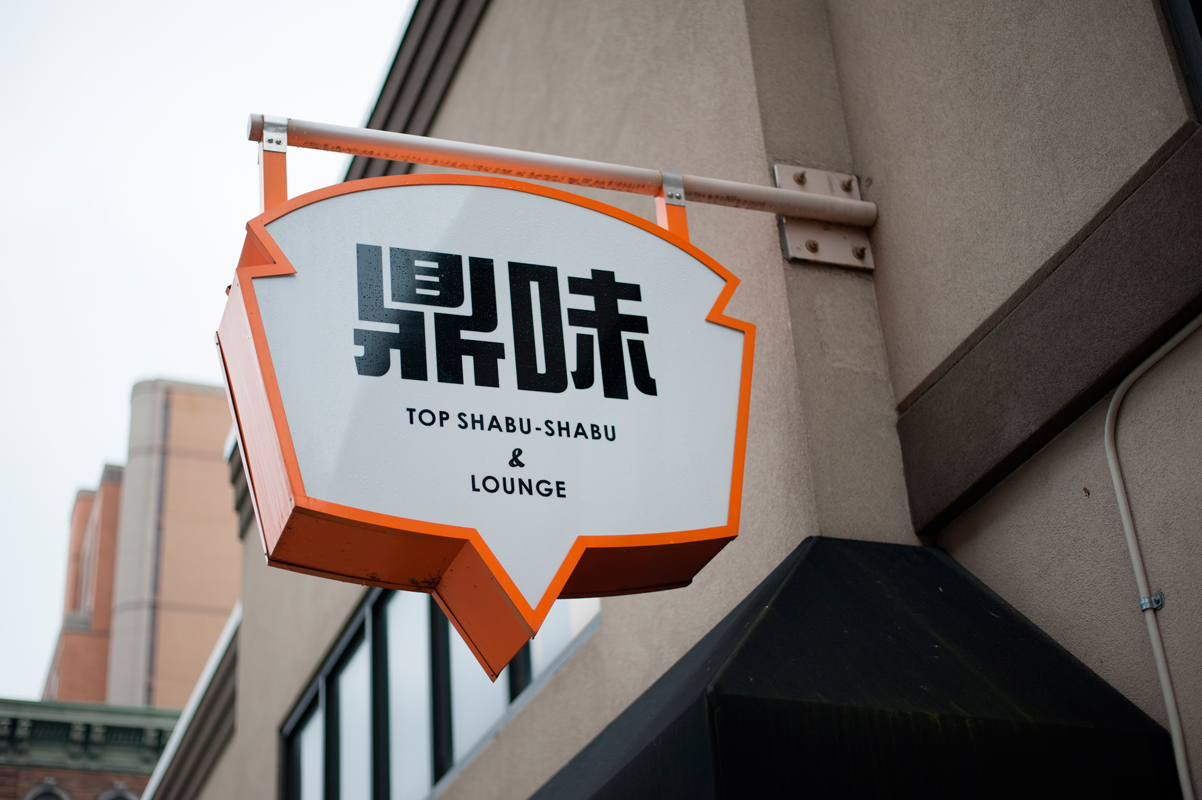 After a lengthy renovation the former Pizza Sola location on Atwood Street reopened a couple weeks ago as the location of Top Shabu-Shabu & Lounge. The restaurant was packed, although it was hard to determine how much of that came from the place being new and how much came from the popularity of the Japanese take on the traditional hot pot style of cooking. Either way, wait times for large parties can be very long and Top Shabu-Shabu does not take reservations, so you may want to plan on arriving early.

The first thing I noticed when I stepped into the restaurant was the rich smell of dozens of soups being cooked, each spiced to an individual patron’s taste and flavored with their choice of meats, veggies, noodles, tofu, seafood, and almost anything else you might want to fill a pot of soup with.

If you’re not familiar with shabu-shabu, you may be wondering why the whole place smells like soup. Unlike beef fondue, which uses heated oil to flash fry what you put in it — or some interpretations of hot pot where boiling water or a very light stock is used as the basis for your soup — shabu-shabu uses pre-packaged cans of rich flavored soup.

Unfortunately, during my visit, Top Shabu-Shabu only had two choices of flavor available: a very spicy hot option, and a mild hambone flavored white soup. On the plus side, both were excellent, the spicier option imparted its flavor nicely into chunks of fried tofu or slices of chicken breast. The white soup had a milder flavor profile that allowed me to to fully avail myself of the “sauce bar,” a collection of oils, spices, and premade sauces like Sriracha that you can mix and match to create a staggering number of options. My favorite was a mixture of some garlic, chives and hot sauce into sesame oil for a sweeter flavor with a bit of a kick.

It was over all a very fun dining experience; three friends and I split the check evenly and for about fifteen dollars a person we were able to get three different kinds of noodle, fried tofu, shrimp, potato slices, a plate of chicken and both a meat and vegetable assortment platter. Mastery of chopsticks proved necessary, as you need to hold onto your meat for the 15 seconds it usually takes to cook, otherwise you would need to fish it out of the surprisingly deep pot of boiling soup with a ladle, which could prove somewhat frustrating.

I didn't have the opportunity to try the more traditional foods on offer, but they seemed very popular with some of the other tables, and our server was kind enough to help us figure out some good things to order off of the extensive menu. He also had to tell us that they currently did not have a number of items, which was disappointing.

Another disappointment came in the form of the drinks. Despite applying for an alcohol license, during my visit Top Shabu-Shabu had not gotten it yet, which meant the handsome dark wood bar was mainly just for show. My server also advised me not to get the tea since it was overpriced without free refills, which relegated me and my companions to filtered ice water. Some enterprising patrons did bring their own outside drinks though, so if I were you I’d bring your own favorite white wine or a sixer of a lighter Dutch or German style beer.

The restaurant was a bit loud and my party occasionally had trouble hearing each other across the wide table, but the atmosphere overall was energetic and youthful, much like the crowd. One of my dining companions said he would bring a first date there, but his girlfriend said she wasn't so sure how impressed she would have been.

Personally, I enjoyed myself and the food and I’m willing to chalk some of the absences and shortcomings to the place still gaining its footing. If you've got a few friends who you can share the large portions with and you want a relaxed evening, Top Shabu-Shabu at 114 Atwood Street in Oakland is a solid choice.