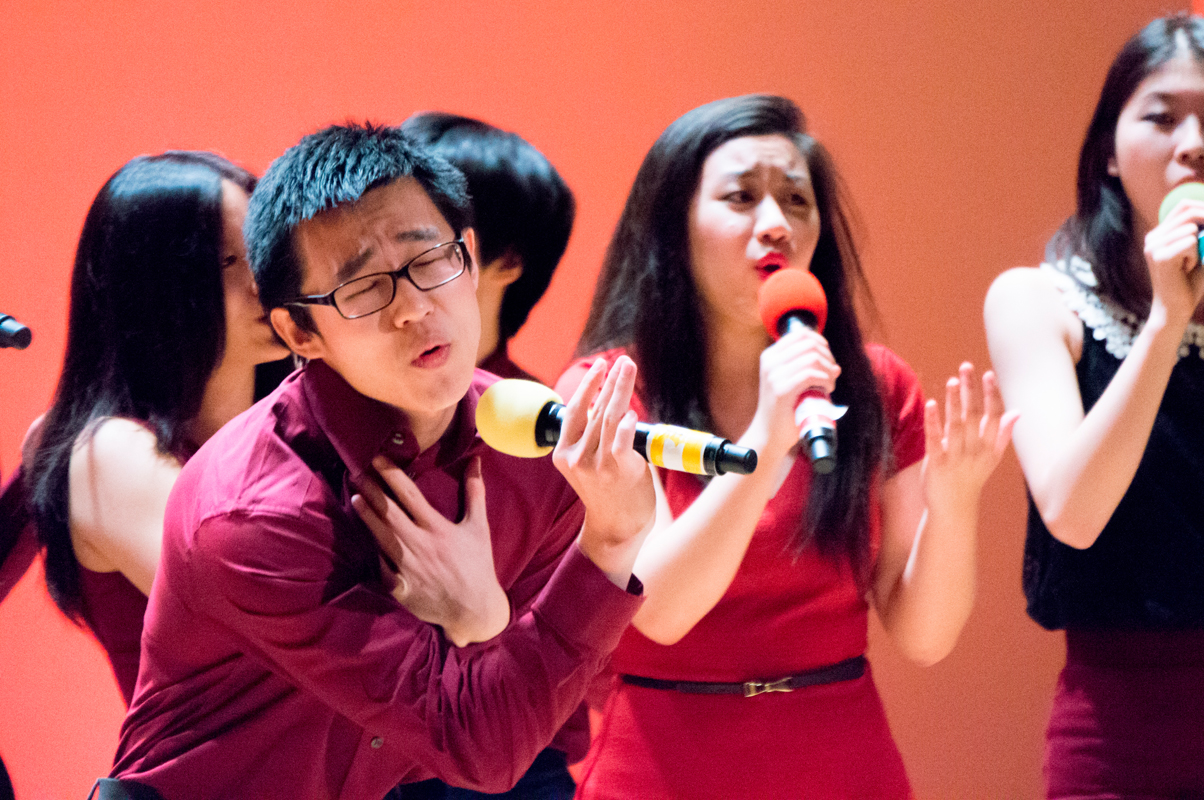 Even though it was one of their first performances, new a cappella group C# wowed audiences with their powerful set. (credit: Abhinav Gautam/Photo Editor)

Last Friday night, Carnegie Mellon’s a cappella groups came together to perform in the No Instruments Aloud 2015 concert, hosted by the Originals. The groups who performed were Originals, C#, Treblemakers, Soundbytes, and Counterpoint.

The Originals took the stage in their classic shirt-and-tie combo, and entertained the crowd with everyone’s latest musical obsession, “Uptown Funk” by Mark Ronson and Bruno Mars. The Original’s amazing energy and in-your-face charisma on stage had the audience, quite literally, bouncing along to the beat. Everyone loved it.

Following an awkward and slightly rushed MC blunder, Carnegie Mellon’s newest a cappella group, C#, took the stage. They looked ravishing in red as they opened their performance with Florence and the Machine’s “Never Let Me Go.” Their intricate dance moves and powerful voices made it hard to tell that this was one of C#’s first performances. They kept the crowd entertained all the way up to their comical take on the Taylor Swift song everyone loves to hate and hates to love, “We Are Never Ever Getting Back Together.” The only thing more impressive than C#’s vocals was their commitment to humor.

Taking the stage in their classic and recognizable gold and black ensembles, Treblemakers performed their diverse set. Although it has started to warm up for the spring season, their beautiful performance of “Sweater Weather” by The Neighbourhood reminded us of colder times. Treblemakers ended their piece with an exciting and crowd pleasing performance of Charli XCX’s “Boom Clap.” Treblemakers had all the components of a strong a cappella performance, including strong vocals, great song choices, and high energy. But after such a charismatic performance from Originals, and a delightfully humorous ending to C#’s piece, Treblemakers’s performance left something to be desired.

After intermission, the crowd was welcomed back with the concert’s next performers, Soundbytes. Soundbytes did a spectacular job putting a soulful spin on an Elton John classic, “Bennie and the Jets.” Judging by the applause, Soundbytes’ next song choice, “I See Fire” by Ed Sheeran, was also a crowd favorite. The performance was strong and powerful, and it left the crowd on the edge of their seats. The group kept up their energy and momentum well into their third piece, and kept the crowd entertained from start to finish. They closed with an oddly true and painfully relevant “Ain’t It Fun” by Paramore.

Next on stage was Carnegie Mellon’s only all female a cappella group, Counterpoint. The group reminded the audience to always be themselves with their interpretation of Sara Bareilles’ hit song “Brave.” Counterpoint then took a moment to honor senior dramaturgy major Rachel Abrams, who then sang an edgy “Boy” by Little Mix. The “Boy” performance had the potential to be a moment for female empowerment, but in the end fell flat. The group’s voices were together and were quite strong, but the song choice did not have everyone in the audience on the same page. Counterpoint closed their performance on a high note, however, with the popular Katy Perry song, “Dark Horse.” The crowd appreciated both the popular song choice and the group’s commitment to singing the entirety of Juicy J’s rap segment at the end of the song.

To close out the evening, Originals returned to the stage looking sleek and classic in new black shirts and ties. They opened their second set with a beautiful rendition of “Ghost” by Ella Henderson. Originals definitely wowed the crowd during their performance, but they somehow outdid themselves the second time around when they utilized the entire stage to perform new and improved dance moves and intricate formations. The group then serenaded the audience with a mash up of Justin Timberlake and Ella Fitzgerald’s “Cry Me A River”.

Originals then left the stage, and at this point the audience was absolutely content and thoroughly impressed with their performance. But then, in full concert fashion, the hosts once again returned and surprised the audience with a trip through all of our childhoods. The group sang a medley of hits from our friend in a pineapple under the sea, Spongebob SquarePants. The crowd was thoroughly entertained with such songs as “The Campfire Song” and “The Goofy Goober Song.”

Overall, all of the groups who performed made the night an exciting one. Joyful Noise was unable to be in attendance during No Instruments Aloud 2015, but we encourage everyone to watch the group perform on May 2 in the College of Fine Arts. We also encourage you to watch and support all of Carnegie Mellon’s amazing a cappella superstars in all of their upcoming performances.