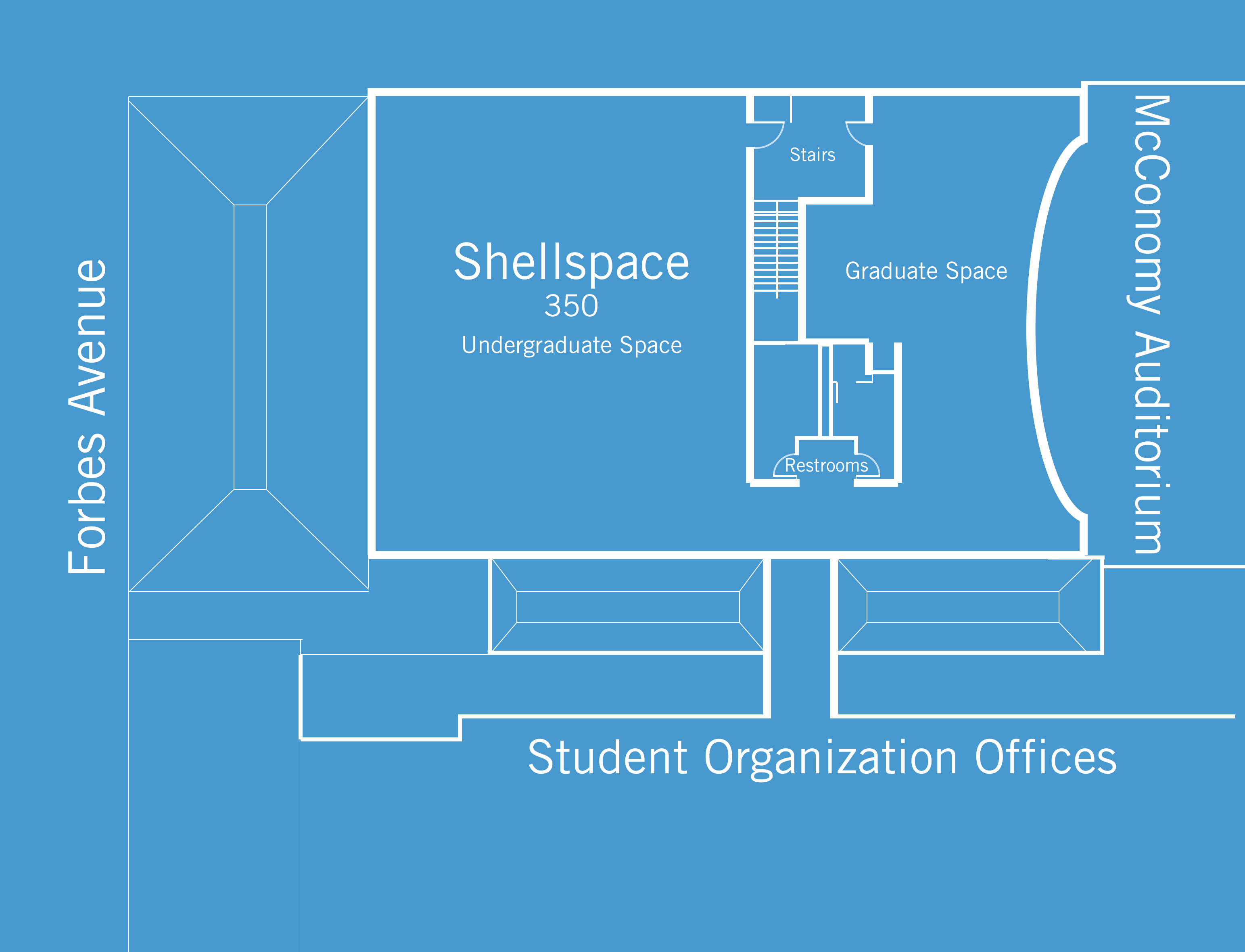 Most students know that the construction to the Jared L. Cohon University Center (CUC) will erect new fitness and performance spaces for student and community use. Those designs are firmly planned and have been the discussion of the expansion for months, if not years.

But on the third floor of the expansion, there is space for student use whose specific design is still in flux — “shell space,” as administrators and students alike have termed it.

The name “shell space” comes from the current building plan for the space: a floor, four walls, and a ceiling, with no definitive current plans for further furnishing — in essence, an empty shell.

Since its initial conception and purchase by Dean of Student Affairs Gina Casalegno and Vice President of Campus Affairs Michael Murphy, planning for the space has passed primarily to student government, and discussions are well underway.

According to Director of Student Activities Liz Vaughan, the shell space wasn’t part of the original plan for the CUC expansion.

Rather, it became “effectively an add-on to the project” once administrators realized they could seize an opportunity amid the previously planned disruption to the building.

Vaughan said that it’s easier to erect extra space while construction is already altering the landscape than to add onto existing spaces later, even if those spaces are not immediately needed. Furthermore, she explained, “It would be cost prohibitive to ever do that in the future.”

So the initial rationale behind shell space was proactive, anticipating future needs, rather than reactive to current demands.

The creation of additional space was made logistically feasible when it became possible to dig deeper than originally planned in shaping out the lower levels of the CUC expansion. Those new spaces, in turn, allowed for extra capacity on the third floor.

According to Vaughan, the driving question was “How do we take advantage of the construction and maximize the space that could be captured?”

These lower spaces have already essentially been auctioned off. The two biggest purchasers have been Carnegie Mellon Dining and the Carnegie Mellon Bookstore — “neither of [whom] have nearly the storage space they need” currently, Vaughan said — both of whom will be financially responsible for furnishing that space.

While dining and the bookstore filled out the lower levels, it became clear that the extra room on the third floor could be harnessed as student space, with fewer passersby on the upper levels and student organization office space also in use nearby.

Seeing the potential, Casalegno and Murphy found the funds — most of which came from a large past donation to the school — to purchase the space and approach student government with a proposal.

In essence, the third floor was not opened for bidding as were the designated dining and bookstore spaces on the lower levels, but first offered for purchase by Senate and the Graduate Student Assembly (GSA).

“The space would have been opened up for auction for all different parties,” said junior information systems major and Senate Chair Evan Wineland. In his words, Casalegno and Murphy’s gesture indicated, “We want you guys to have priority.”

Once Student Senate and the GSA responded positively to the idea of purchasing the space for student use, the question arose how to divide and design the space for optimal use.

Vaughan explained that a natural division of space arose because of a stairwell in the center of the shell space layout.

Both bodies plan to proceed relatively independently, each with their own designs and plans for financing their respective spaces.

Senate: Vision of a Collaborative Space

To determine a function for the shell space, Senate hosted a number of tabling events to launch the discussion, drawing feedback from students who approached their table and completed their surveys.

From the survey results, Senate concluded that students primarily wanted collaborative study space, followed by dining and music spaces. This response prompted a second iteration of the survey, in which Senate asked, “What are the adjectives that make you think of a more collaborative space?”

In terms of what “collaborative space” means, Vaughan described it as an “open, multifunctional space where people can flexibly adjust how it’s being used.”

“There’s not a single purely academic space in the [Cohon] University Center because it’s supposed to be the focal point of other aspects of student life,” Wineland explained. But right now, Wineland said, “It’s crowded. It’s cramped.”

The goal is to “make sure that there is more opportunity for student to relax,” Wineland said.

To streamline efforts toward planning for the space, a Senate shell space committee emerged, comprising six student senators and chaired by Eddy.

“Even though the committee is exclusively senators, they were elected to represent the student body,” said sophomore economics major and Dietrich College senator Vaasavi Unnava. “They represent a pretty diverse group of colleges and years.”

While Senate conducted its own discussion of how shell space should be used for undergraduate students, the GSA saw its opportunity to dedicate space specifically to the graduate student experience.

Vaughan elaborated, “The [CUC] isn’t a center for grad students; it’s a hub for undergrads.”

According to GSA President and Ph.D. candidate in rhetoric Carolyn Commer, the inspiration for a graduate student lounge is drawn from the GSA-sponsored coffee shop that existed many years ago on campus, sometimes referred to as the “Liquid Sky Cafe” or the “Ivory Tower.”

“Our current vision is a bit of a revival of that old coffee shop as a casual lounge space where all graduate students are welcome to socialize, collaborate, or study,” Commer explained via email.

As part of that vision, the space is currently intended to include large, rectangular tables for group discussion, as well as small tables and movable furniture “for either individual study or more intimate coffee house-style conversation.” Also featured will be a kitchenette offering tea and coffee.

According to Commer, GSA collected feedback from and offered opportunities for involvement for graduate students over the past two academic years.

In academic year 2013–14, that feedback mostly consisted of updates and open discussion in meetings with GSA representatives, and in April 2014, GSA representatives began sending email requests for feedback to graduate students and inviting them to join the GSA grad space planning committee.

Preliminary estimates for cost of the space are $191,750 for GSA and $378,125 for Senate, according to Vaughan. However, by multiple accounts, these number are subject to change substantially once the design details come into focus.

“My hunch is they will pull back from that,” Vaughan said. “You don’t need to be at these numbers to do what you want with this space.”
Wineland and Eddy both described the question of financing the space as a “chicken-and-egg” problem.

“We want the architects to tell us what we can get with a certain price range,” Wineland said.

At the same time, however, the architects need design details for an accurate estimate, while student government wants to keep those details vague to keep the cost flexible as they look for means of financing the project.

Regardless of actual final cost, Senate doesn’t have the funds to pay for the space upfront. Knowing this, Casalegno and Murphy have offered to loan student government the funds — at no interest — to be paid back in no more than 10 years.

To express its commitment to financing the shell space, Student Senate has put forth a deposit of $50,000. According to Wineland, $18,000 of that money came from budget allocations, while Senate withdrew the remaining $32,000 from its reserve, leaving about $10,000 left in the reserve.

“Previously, that money had been stagnant,” Wineland explained.

GSA is still determining from where it would draw its funds. According to a written statement from GSA Vice President of Finance Mark Whiting via Commer, a Community Improvement Fund was started a few years ago as part of the endowment — a fund which could cover a large fraction of annual loan payments toward shell space.

Other methods of obtaining funds include “using a small amount of our capital, consolidating some main expenses, or raising funds through events or standard activities fee growth.

Another option which has not been ruled out is to use a very small percentage of the student body’s activities fee account to help in funding the entire shell space buildout project.”

Part of the issue, Vaughan explained, is not just a matter of finding the money, but also justifying allocating funds toward shell space when it could have been spent elsewhere: “How do we best leverage our money so we aren’t reducing services and programming to the point that it’s harming the student experience in other ways?”

For GSA, the primary next step will be reforming its graduate student space planning committee, as many of its current members will graduate at the end of this academic year, according to Commer. That committee will respond to upcoming designs from the architects and present those designs to the student body, as well as solicit feedback and student artwork.

Meanwhile, Eddy and the shell space committee are looking to draft a general plan for Campus Design to get an up-to-date estimate from the architects.