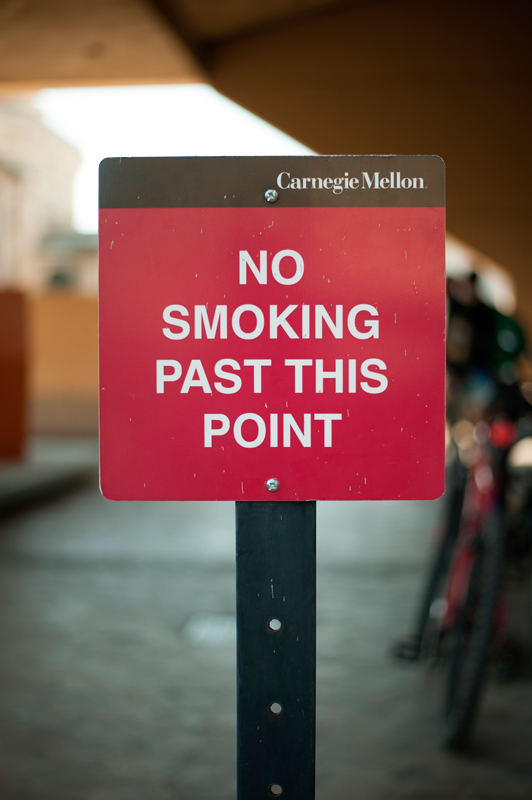 Cigarettes: many students have had one, some want to try them, and some smoke them as a habit.

Currently, Carnegie Mellon allows students and other campus members to smoke in designated smoking areas, often situated in less traveled areas and on the peripheries of campus. But that could change if a tobacco free policy proposed by the Smoking Policy Review Committee is approved by an Undergraduate Student Senate vote on Thursday. The policy also must be approved by the Graduate Student Assembly, Staff Council, Faculty Senate, and University President Subra Suresh before it goes into effect.

The committee, composed mainly of administrators and other employees of the university, will completely remove smoking from campus if their policy is approved.

In 2009, a group called The Healthy Campus Task Force created the designated areas and enforced a $25 fine for smoking in non-designated areas as part of a program Campus 2010. The fines also pertained to littering cigarette butts.

“The committee was formed to benchmark best practices, to look at other colleges’ policies, and to review the literature to understand from a public health standpoint what was in the university’s best interests,” Dean of Student Affairs Gina Casalegno said.

The argument can be made that Carnegie Mellon is behind in its tobacco policy. 1,514 campuses around the country do not allow smoking, and 1,014 are completely free of tobacco as of January this year, according to the United States Tobacco Free Initiative.

There were about 774 smoke-free campuses and 562 tobacco-free campus when the Smoking Policy Review Committee was created, according to the initiative.

It was not always the case that Carnegie Mellon found itself behind in this policy. Junior decision science major Julia Eddy, a member of Student Senate, sits on the committee as the only undergraduate student representative.

“Early on, our policy of having smoking areas in 2006 was very progressive for college campuses,” said Eddy. “The last time the smoking policy was reviewed, going smoke- or tobacco-free was met with a lot of opposition.”

Casalegno noted that there are smokers on the committee, but that many of them agree that a smoke-free campus is in the best interest of Carnegie Mellon students. She additionally noted that the policy would not look to change an individual’s stance on smoking: “If we adopt this policy, it is not the university saying ‘individual members must quit.’ ”

Though the administration does not wish to actively make smokers quit, a support system for smokers who wish to quit will still be a part of the plan. “We do care a lot about individuals who consume tobacco and wish to receive aid in cessation of those habits” Casalegno noted.

One could argue that the proposed policy is a violation of smokers’ basic personal freedoms, but this is not the stance taken by the committee. Of the smokers interviewed for this article, nearly all stated that the policy would inconvenience them.

As for the general student body’s opinion, there has not been a conclusive smoking survey since the one Carnegie Mellon’s Healthy U project released in October.

The majority of smokers who took the survey stated that they wished to quit. That being said, Eddy further stated via email that “the administration was concerned with survey fatigue in light of CMU student experience survey and sexual assault and relationship violence studies.”

During discussions, the committee considered the effects of secondhand smoke.

“We do not believe the current system is sufficient in preventing secondhand smoke risks,” Casalegno said. “We want to move smokers’ actions to places where they have less of an effect on others.”

Additionally they discussed the counter-argument for smokers to be able to practice their habit as they see fit.

“We have had a very open and transparent process with engaging the governing bodies and really inviting students, faculty, and staff to talk to their constituencies and give us feedback,” Casalegno said. “So the input we’ve received from people who choose to use tobacco, including members on our committee, [has helped] us shape what we think is the best approach.”