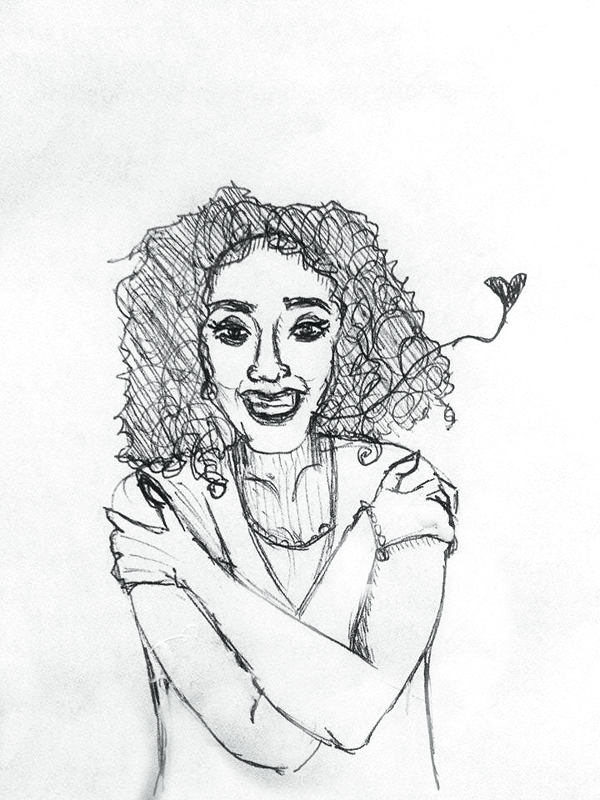 Body image is part of womanhood (credit: Maegha Singh/)
Editorials featured in the Forum section are solely the opinions of their individual authors.

Just over two weeks ago, I saw the School of Drama’s production of Steubenville. It was insightful and harrowing; it toed the line between deeply personal and completely universal. It rang true for me as a woman and, as someone from urban Ohio, it felt close to home.

While the show focused on rape culture, it also examined body image. Body image and insecurity aren’t limited to women, but I want to speak from my own experience because body discussions belong in the discourse about feminism and empowerment.

Last week I saw several discussions online about Meghan Trainor’s new song, “Dear Future Husband,” claiming that it is sexist. I’m still on the fence about this; it could also be a satire of relationships and the power dynamics of gender roles, á la Taylor Swift’s depiction of abusive relationships in “Blank Space.” Trainor’s “All About That Bass” from last summer was catchy and felt empowering, but some called it skinny shaming. That debate made me evaluate the way I feel, think, and talk about body size.

I am not thin. I don’t think of myself as fat (most days, anyway), but I am definitely not thin. I know that weight and health are different things, but I rarely feel confident in my body and I haven’t been satisfied with my weight since I was 16. My BMI was once on the border between “normal” and “overweight,” but now rests at the high end of the “overweight” zone. (While I recognize that BMI is not the most accurate measure of health, doctors do say it gives a useful estimate.) I hate that weight insecurity is part of my identity as a woman.

Weight loss is a struggle. With some minor fluctuations, I have maintained the same approximate weight for over a year and half. As someone with asthma, exercise is difficult. Because I take asthma and allergy medications, weight clings to my body a little more tightly. Food habits are tricky, too. I enjoy food (let’s face it: carbs are delicious) and sometimes I use it for non-nutritional ends (snacking helps me stay awake when I’m up too late studying).

Let’s clarify something: Not all eating disorders make you skinny. Compulsive binge eating is a battle for me. Sometimes it’s called food addiction, likening it to smoking or alcoholism. The catch, of course, is that you can’t quit food.

Certainly, all eating disorders are dangerous. Anorexia and bulimia are devastating. Binge-eating disorder differs in its effects, but has similar roots. Food is accompanied by guilt, stress, and shame, which perpetuate in a cycle. Given the choice between an eating disorder that makes you fat and one that makes you skinny, who would prefer the former? Maybe it's flippant to ask. Our consumer culture certainly tells us the latter.

For a long time I thought weight and restraint had to do with willpower. I engaged in skinny-shaming before I even knew the words for it. The truth is that eating disorders are connected to mental health, not self-control. And not all weight gain comes from eating disorders: accessibility, socioeconomics, and underlying health issues (both physical and mental) all play a role. Still, fatness is associated with laziness, sloppiness, and poor self-control. Rooted in objectification and internalized misogyny, the stigma perseveres.

Lots of people are naturally skinny. As a naturally chubby person, I often cannot help feeling resentful of them. I find myself looking at thin women knowing that, even if I lost the excess weight, my rib cage would still be built larger.

The body positivity movement has made strides toward eliminating both "fatphobia" and skinny shaming by emphasizing natural differences in body shape. But while the media represents variations in thin bodies — curvy, wiry, lean, etc. — there continues to be little variation in the representation of overweight women.

Thin women aren't marginalized in the way overweight women are. In advertising, thin women are aspirational representations of ourselves. In consumer culture, clothes are made to fit thin women; larger sizes are typically enlarged versions of smaller sizes, and don’t account for the way garments fit on differently sized bodies.

I won’t pretend to understand how thin women feel when they’re called “too skinny” or “anorexic-looking.” Skinny shaming oversimplifies reality for thin women. Many women work hard to stay in shape. Others struggle to put on weight. We shouldn’t discount these challenges, but it’s difficult for me to maintain that outlook when I’m jealous of someone’s thin privilege.

Thin people can struggle with their bodies too, but their privilege comes from judging their bodies by their own standards. To borrow a metaphor from Everyday Feminism, no one else is offended by their beach body. Meanwhile, society sets the standards for overweight people’s bodies. People on the beach do take offense.

The discussion of privilege brings me back to Steubenville. Rape culture links bodies to sexuality and objectification, and one of the most conspicuous signs of modern rape culture is catcalling. In the show, a woman talked about being catcalled when she runs, and said that it has only happened since she lost weight.

This makes a connection between objectification and attractiveness. She explained the paradox of wishing she heard catcalling before and hating that she hears it now. Rape culture does that to us; it perpetuates an image of what we should want that differs from what we actually feel. In reality, catcalling isn’t related to attraction.

Catcallers seek to objectify, making their victims feel threatened and insecure. I've heard women say it feels like a compliment, but I don't think it’s empowering. In particular, when a fat woman is catcalled, there is an additional implication of mockery.

I don’t often wear makeup, but I try to put thought into my appearance. Some days are more effortful than others. No sleep and a long day of classes? Oversized sweater it is. Yet I feel self-conscious on these days. Overweight people are stigmatized to be sloppy and lazy. A thin woman in the same outfit looks like a hipster, but I look like a mess. Is this my own perception? Am I contributing to the stigma by feeling this way? I hope not, but I fear otherwise.

Is the solution to learn to love my body? That seems a little thoughtless. Contrary to comic film portrayals (Bridesmaids, Hairspray, Pitch Perfect), confidence isn’t a catch-all solution for overweight women. I’m happy for those who embrace their bodies, but not everyone feels that way.

The media also tends to represent two extremes: clearly overweight or conventionally thin women. Medium-sized or chubby women aren’t shown much. I like Mindy Kaling’s comments about being “average American woman-sized.” I’m probably closer to her size and shape than anyone else I’ve seen on television.

Will I continue to try to lose weight? Yes. While I wish I felt more body-positive, I still feel body-insecure. Ideally, feeling good about my body would be independent of my weight. I'm just not there yet.