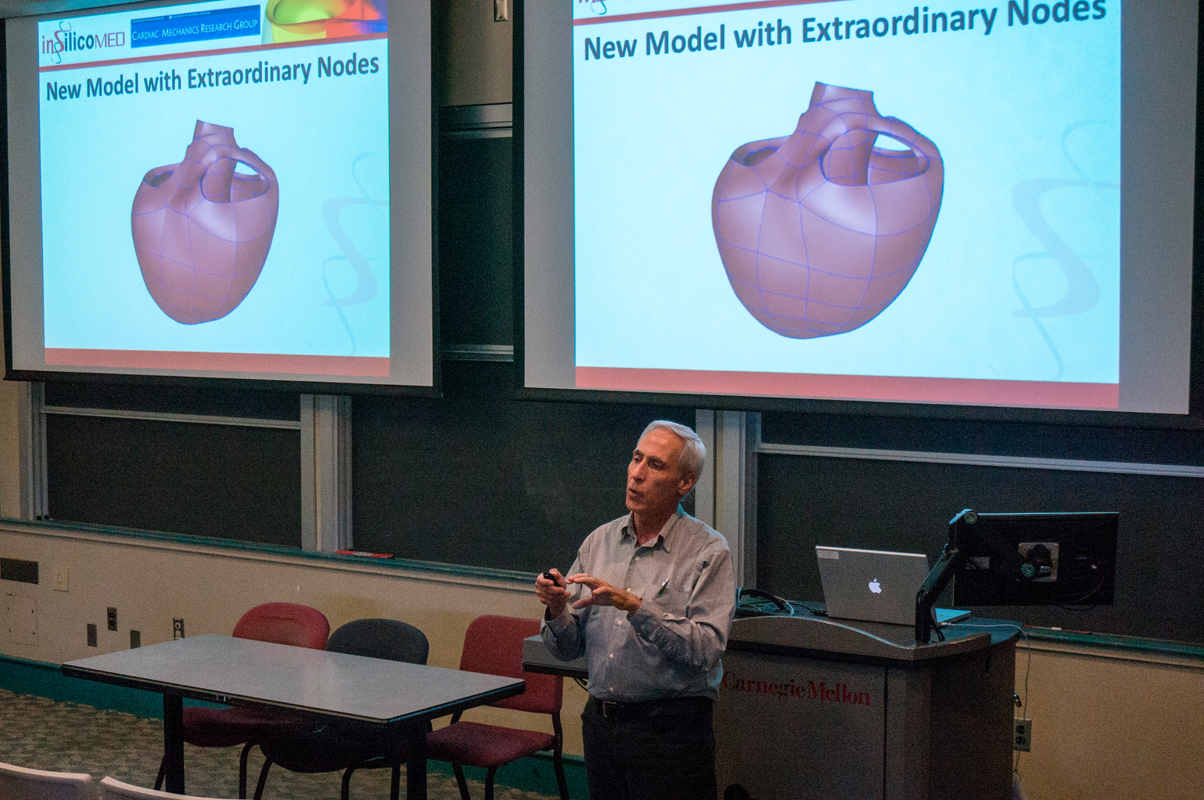 Lewis Waldman, CEO of Insilicomed Inc., spoke last week at Carnegie Mellon about his work involving the development of a 3D simulation of the heart. (credit: Abhinav Gautam/Photo Editor)

Lewis K. Waldman, CEO of Insilicomed Inc., spoke last Tuesday at Carnegie Mellon as part of a seminar series hosted by the biomedical engineering department of the Carnegie Institute of Technology. He began his talk with the last slide of his presentation, which showed a 3-D simulation of the human heart.

The animation of the beating heart wowed the audience as each aspect of the heart elongated and contracted in a carefully controlled manner, truly showing the complexity of one of the body’s most important organs. The simulation is the result of many years of research and collaboration between Waldman and researchers at the University of California, San Diego (UCSD), who hope their work will have clinical applications in treating patients.

The heart is a complex and vital muscular organ that pumps oxygen- and nutrient-carrying blood throughout the body. Humans and other mammals have a similar heart structure with four chambers connected by heart valves, which prevent the back flow of blood. Fundamentally, deoxygenated blood enters the enters the right side of the heart, gets redirected to the lungs where oxygen diffuses into the blood, and then enters the left side of the heart to be pumped around the body.

The Center for Disease Control and Prevention reports that, in the United States, cardiovascular disease is to blame for approximately one in every four deaths. Cardiologists and researchers such as Waldman want to improve the ability to treat cardiovascular diseases to reduce the threat of one of America’s most pernicious causes of death. Specifically, Waldman believes that with the emergence of computing applications in medicine, we will be able to develop accurate models of the heart that will have strong clinical benefits.

Waldman spent much of his early career measuring regional and global cardiac function in animals to develop simulations of the heart. This gave him the knowledge and expertise to team up with Andrew McCulloch and Jeff Omens, professors of biomedical engineering at the University of California, San Diego, to venture into modeling the human heart. At first, the researchers were working through funded grants from the National Institutes of Health (NIH) and other sources that spanned multiple years. After seeing the potential of their work, companies began approaching them to develop the tools in a shorter time frame and speed up the process of development. This motivated the three to start their own consulting firm, which evolved into today’s Insilicomed, Inc.

McCullloch and Omens remained at UCSD and began a project in 2009 involving heart failure patients who were indicated for cardiac resynchronization therapy (CPT). CPT involves implanting a half-dollar sized pacemaker below the collarbone with wires that measure the beating of the heart and emit tiny electrical impulses to correct irregular heart rhythms, also known as arrhythmias. They collected extra measurements in addition to the ones required, hoping to turn the data into accurate simulations of the irregular heart structure and function.

Soon after, in 2010, Waldman, along with researchers at Insilicomed, Inc., began their own study, attempting to see if they could get away without making extra measurements, but simply using the standard collection of clinical data to make accurate models. In the past few years a convergence of both methods has allowed the scientists to find that all the extra measurements are not needed to build the most accurate models. It allowed them to pinpoint exactly which data points would need to be collected.

These computational simulations not only allow a model of the heart problem but also enable the testing of CPT treatments. According to Waldman, currently 30 to 40 percent of CPT treatments do not work because there is a lack of understanding of the underlying problem in a specific patient. By collecting the necessary data from a patient, the simulation then allows a doctor to create a personalized model of the heart and thus implement a personalized treatment. Their studies have examined the impact of this approach and found that their simulations have a very strong clinical response.

Waldman explained in his seminar in dense technical detail that their simulations reach a high level of accuracy because each node that models the heart carries an immense amount of information. To generate a 3-D animation, each node contains seven derivates in each direction, leading to thousands of elements that achieve a highly precise biomechanics modeling.

In addition to a direct clinical applications, the modeling of the heart enables other researchers to visualize the heart and the impact of the devices they create. Dennis Trumble, a professor of biomedical engineering at Carnegie Mellon and the individual who invited Waldman to give the lecture, works on developing implantable medical devices meant to prevent cardiac arrest. He mentioned that using the simulation allows his team to directly test their devices structurally in the models, saving them the time and money of conducting experiments directly in animals and drastically speeding up the research and development process.

Enabling this level of precision in cardiovascular medicine will enable a new age of personalized medicine. With advances in computing power and the emergence of machine learning, these models will only become more accurate and may become a commonplace in the clinical realm.