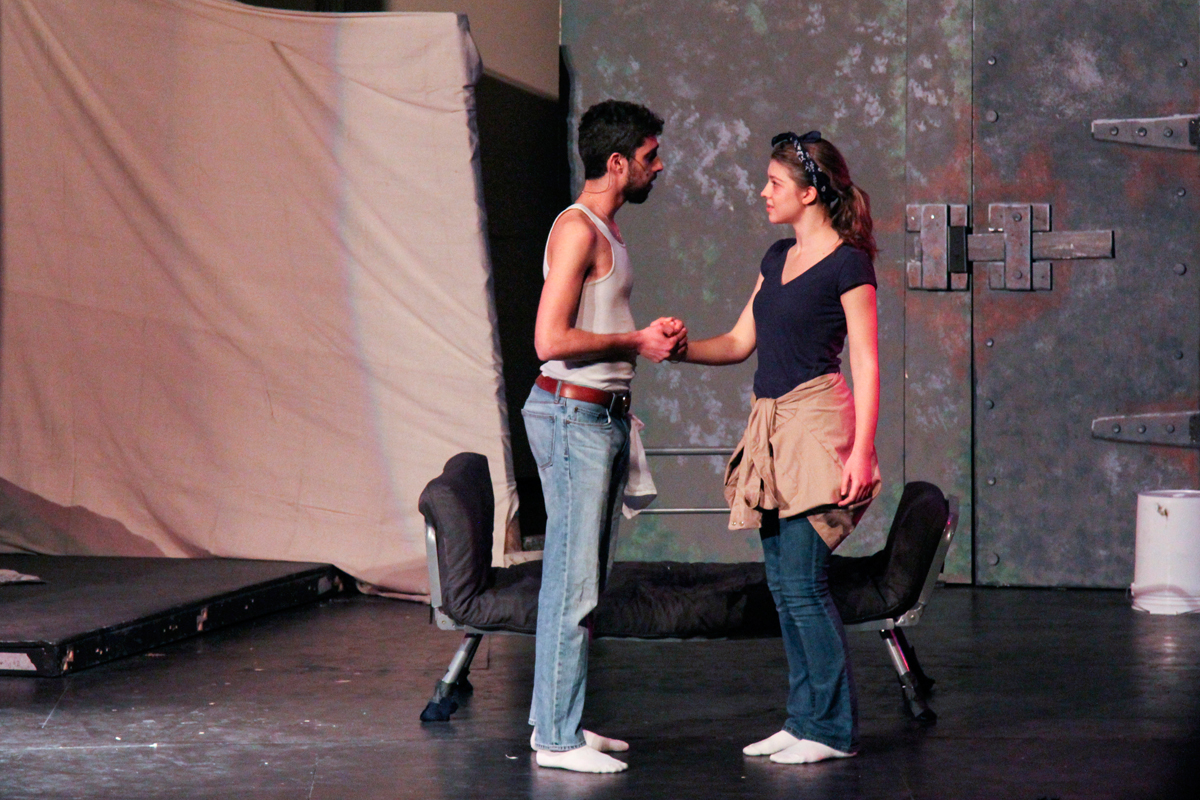 Viktor, played by Scott Cuva, and Maura, played by Brianna Hudock, share a moment in the bunker. (credit: Danielle Hu/)

Last Friday, I had the privilege of attending the opening night of Guts, a small musical built from the ground up at Carnegie Mellon University. Performed in Kresge Auditorium within the College of Fine Arts in front of more than 250 people, Guts was an immensely moving experience. I walked out with a broken smile on my face, and a ton of big ideas in my mind. Written by senior electrical and computer engineering major Brad Plaxen, with music by senior chemical engineering major Alex Petti, and directed by senior professional writing and global studies double major Razghiem Golden, Guts, is a post-apocalyptic zombie story like no other. The play follows a small group that has survived for ten years inside the confines of the protective but oppressive Bunker 63.

Rules and routine, the cornerstones of the group’s survival strategy, are thrown out the window when an outsider enters the bunker. This outsider is no ordinary survivor, and the aftermath of his arrival brings out the best and the worst in the bunker’s inhabitants. Some of them welcome the change he is the harbinger of, while others resent it. Everybody makes decisions — some wise and some unwise, some brave and some cowardly — that go on to have repercussions for the group as a whole. In the wake of what follows, fundamental questions about life are brought to the fore. What does it mean to be alive? Is surviving the same as living? If the zombies are up there, and can see the sun and feel the grass, while we’re down here in a little bunker, who’s really dead: them or us?

Even though zombies dominate the narrative throughout, not once does one actually appear on stage. Because of this, in spite of being such a central focus of the script, the zombies are but a means to another, more universally relevant theme: breaking free from fear and reaching for something more than just surviving. On this level, Guts thrives in its ability to resonate with us; who hasn’t felt trapped, whether it’s in the wrong major, a sad job, with misunderstood friends, or in a loveless relationship?

The attention to detail that the writers, director, and cast brought to Guts is incredible for the small scale of the show. The subtlest of glances and mannerisms give clues to characters’ motivations. Every one of the nine characters is meticulously considered and developed. In one spectacularly put together scene, two characters are spilling their hearts out to each other about a perceived lack of affection from their respective significant others. In the background, the silhouettes of the aforementioned others are seen getting intimate with each other. In another scene of unbelievable poignance, an infected character needs to be euthanized. The group, completely fractured by that point, gets into a heated argument on how to kill him, in front of his horrified eyes.

This attention to details is equally prevalent in the music. “Musical” isn’t the first thing that comes to mind when someone says “zombie apocalypse,” yet the importance of the music in Guts cannot be overstated. In so many scenarios, lyrics and melody effectively express sentiments that would seem heavy-handed and tacky if expressed through dialogue. The music itself comes across as effortless and earnest. A sparse ensemble consisting of a drummer, a guitarist, a pianist, a violinist, a cellist, and a bassist put together what can best be described as a mixture of alternative rock and more traditional musical theater. The simplicity of the music complements the unpretentiousness and sincerity of the script well. This, combined with the natural intimacy of Kresge Auditorium, adds up to an experience that is less like watching a fancy bells and whistles production, and more like watching a bunch of your close friends put up something that is obviously deeply important to them.

That said, Guts is unabashedly a “rough around the edges” student production — don’t go in expecting Broadway. The set is a single room of Bunker 63 with a dining table, a radio, and scaffolding hung rags for walls. While watching Guts, every once in a while, I heard a note that was ever so slightly off key or off time. The tech setup wasn’t the greatest either. Monitor feedback aside, two characters’ mics got completely cut off in one slightly embarrassing scene. Ultimately though, even these little fumbles only added to the overall vibe that Guts was succeeding in building.

On the back of a brilliant story, some whip-smart dialogue and heartfelt music, Guts clicks in a way that nothing this casual has any right to. Considering the constraints it works in, Guts accomplishes amazing things. A big budget adaptation would spruce up the set, spruce up the sound mixing, and play in a much bigger space than Kresge. Yet, for all the gains that such an adaptation would make, I believe it’d lose even more. You see, more than anything else, Guts moved me by the sheer emotional weight of its pure, unassuming simplicity. I loved Guts not because it wowed me with intimidating scale, but because it innocently drew me in, deep into its emotional core, until I was too invested to let go.