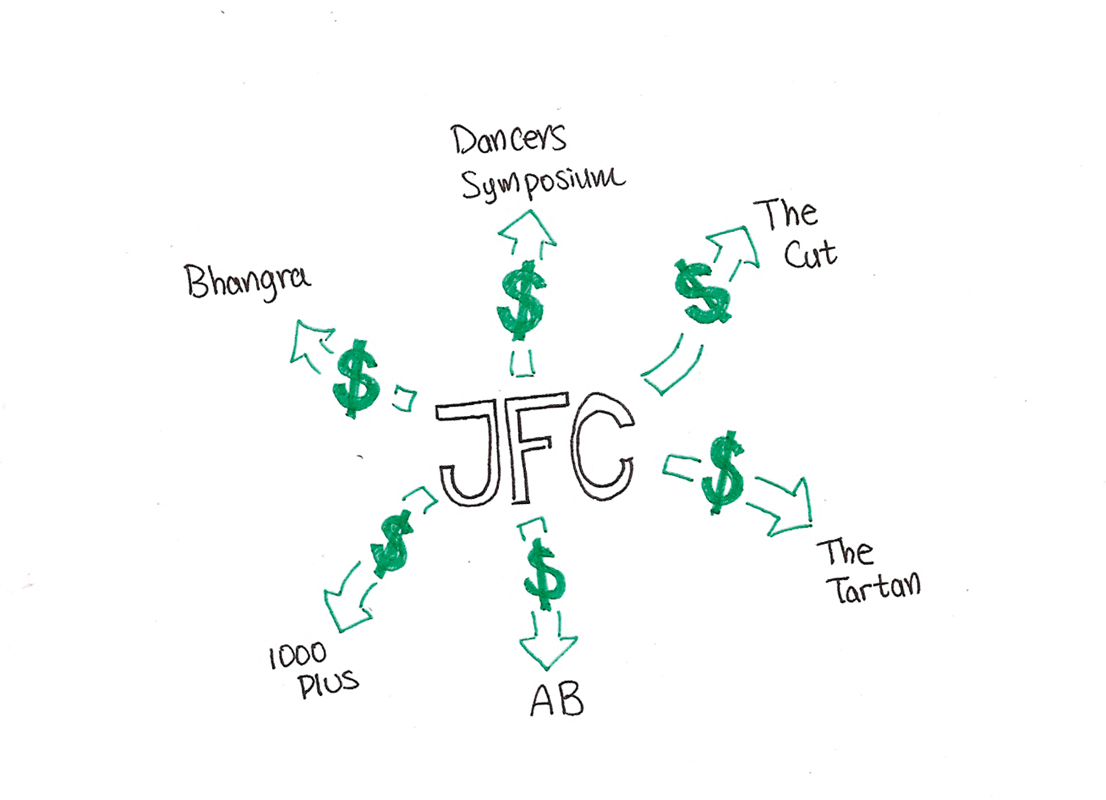 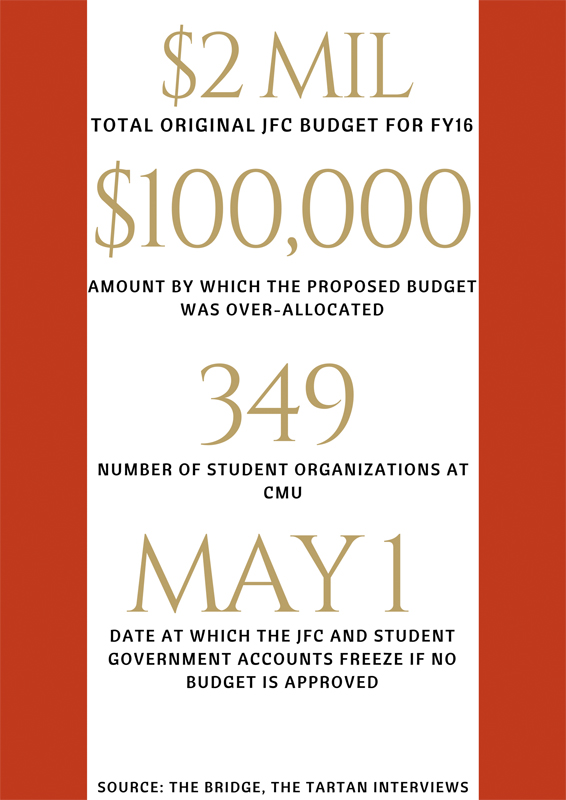 Made with Canva (credit: Laura Scherb/Publisher)

On Thursday, the Undergraduate Student Senate and the Graduate Student Assembly (GSA) met for about four hours with intentions to ratify next year’s student organization joint funding committee (JFC) budgets. A contentious issue was the over-allocation of the JFC budget, which funds student organizations, by nearly $100,000. While the GSA voted overwhelmingly to pass the budget, Senate did not approve it, meaning that the 2016 fiscal year budget remains currently unapproved.

How does the JFC project the funds they will be able to allocate?

In February of each year, the student activities staff makes projections for anticipated funding for the next fiscal year.

According to Director of Student Activities Elizabeth Vaughan, this projection is based on three things: the rate of change in enrollment for both undergraduates and graduate students, the activities fee for the following year, and the projected number of dollars coming into the activities fee accounts.

“We then use that number to tell the JFC how much we anticipate them being able to allocate.... Those projections guide the JFC in how they’re dividing up the money,” Vaughan said.

At that point, the JFC and the student body vice president for finance (SBVPF) must determine whether or not they want the final budget to hold to that number or if they are comfortable with over-allocating funds.
According to Vaughan, there is a history of student government approving some amount of over-allocation in anticipation of unused money returning to them at the end of the year.

This money is returned to the JFC in June, after the final financial reports are run for the fiscal year.

“We go through the rollover and debt forgiveness process to see where their student organization account has landed,” Vaughan said. “For the vast majority of organizations, there’s a small surplus in their account and, essentially, all of these [organizations’] accounts are put together and it helps us to get a sense of where all of the accounts end up.”

There is typically a surplus, which goes into a holding account, and that money is allocated in the next fiscal year’s JFC process.

According to Divya Kothandapani, the current SBVPF and junior electrical and computer engineering major, the amount of rollover money collected in fiscal year (FY) 2014 to distribute in FY’16 is $73,228.

In FY’13, $95,783 in rollover was collected. That amount, according to Kothandapani, was distributed in FY’15.

What happened in this year’s budgeting process?

This year, at the joint ratification session during which Senate and the GSA vote on the budgets, Senate did not approve the FY’16 budgets for a number of reasons.

“This year, there was a large contingent of Senate that was not confident in the budget and didn’t want it to be approved, so they voted it down,” Vaughan said. “The senators and JFC reps that were there voiced a variety of concerns, one being the over-allocations of the amount of money that was budgeted to be spent. Two weeks prior to when the budgets were supposed to be sent out, there was still a sizable dollar amount to be cut, and Senate had concerns about the way that those cuts happened and the speed at which they were made. They also shared concerns about transparency and the way that decisions were made, particularly the revenue decisions,” Vaughan said.

In the proposed budgets, $60,000 in revenue was matched up to expenses, so the JFC only funded the funding gap for each organization. Now, there is no expectation on revenue. At the end of the fiscal year, if an organization only earns some of their expected revenue and only spends some of their JFC subsidy, the money remaining in their account will stay there. This gives them a better chance at retaining their money if the revenue is not met, unlike in previous years.

The JFC initially allocated approximately $2 million to organizations in a non-released draft of the budget. Since then, they have cut about $500,000 from the initial draft, said junior math and economics double major and SBVPF-elect Benjamin Zhang. Those cuts, made in two weeks, were the ones that raised concerns for many senators, according to Vaughan. Though the GSA voted to approve the proposed budgets, Senate did not and now members of student activities, student government, and the JFC are working to prepare a new slate of budgets for approval before the end of the fiscal year, June 30.

“Student Government is currently in the process of figuring out what the next steps are to create a new budget slate and we will be in touch with you shortly for further details,” Kothandapani said in an email sent out to student organization leaders last Friday.

What steps were taken at Thursday’s meeting to pass the budget?

When the budget was presented to the joint session body, there was nearly $100,000 in over-allocated funds that needed to be cut. During second round appeals, any senator or GSA representative can appeal line items from the proposed budget. This year, there were three line items of the overall budget that senators appealed in the discussion: funds for the Carnival committee, the SBVPF, and Scotch ’n’ Soda. The Carnival committee’s budget for Carnival’s relocation to the College of Fine Arts parking lot was cut by $50,500, the SBVPF’s budget for event subsidies when AB Tech is not available to cover events was cut from $10,000 to $3,000, and the Scotch’n’Soda budget was cut by $900 to account for a budgeting error.

Even with these cuts, the budget was still over-allocated by over $41,000, according to Vaughan. “There has, historically, been several times in the last six years where there have been over allocations between $41,000 and $50,000, however those were in the years before the activities fee was raised to accommodate the needs,” Vaughan said.

This year, the over-allocation prompted some senators to question the integrity of the budget and to vote against its approval. Senate voted 3–16–2 to strike it down, and GSA voted 45–0–2 in overwhelming support of the budget.

What happens if the budgets aren’t approved by May 1?

Members of student government, student activities, and the JFC worked over the weekend to formulate a plan for another slate of budgets. “We had conversations all day on Friday to determine a course of action for the budgets,” Vaughan said. “But those conversations led to a lot of questions and a lot of consulting the governing documents.”

The constitution of student government specifies that if the budgets are not approved by May 1, GSA and Senate cannot spend any money from operating accounts until the budget is approved. Essentially, bodies wouldn’t be able to function after that date.

“We want to move as expediently as possible, particularly knowing the time of the year, and the specific constraints that the governing documents laid out,” Vaughan said. “We’re trying to move efficiently as possible, but while being as prudent as possible. We made a well-informed decision on Friday, but we want to make sure it makes sense. As the advisor, I have to help them make the right set of decisions for the budget.”
Members of Senate and GSA met at the end of last week and over the weekend to further discuss the budget and why it didn’t pass. The Senate executive committee is meeting on Tuesday to discuss a consolidated rationale for the budget votes, according to Kothandapani and Zhang.

“There are competing demands: student organizations, student government, etc. It’s a challenging time of year, between the academics and the looming deadlines,” Vaughan said. “There are next steps to be made and there will be a series to bring closure to the budgets and it’s important that [Kothandapani] and [Zhang] communicate it to orgs.”

She promised that student government was working over the weekend to solve the problem and prevent it from going that far, additionally promising that updates will be announced in a timely manner.