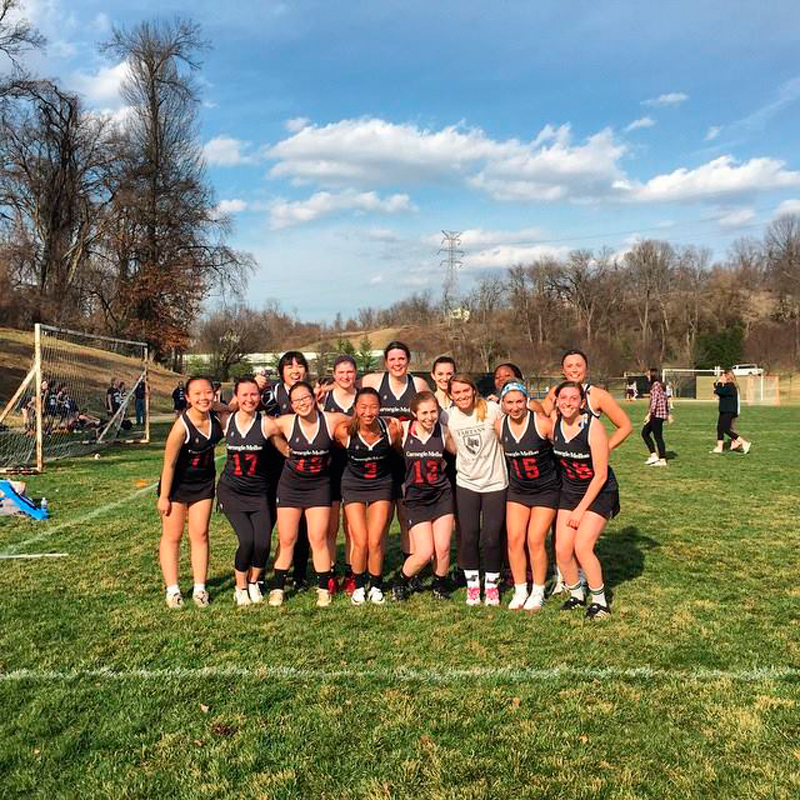 The Carnegie Mellon women’s lacrosse team has had a tough season, but its growing strength is something their competitors in the Women’s Collegiate Lacrosse League (WCLL) should be noticing. The Tartans finished 4–4 this year, up from 3–5 last year. The team even qualified for the playoffs, although it was unable to compete because of Carnival. What should be noted is that the team has managed to do this well despite trying circumstances that have tested its tenacity off the field.
Sophomore midfielder and team captain Melyssa Eigen chronicled some of the challenges the team faced during the season. One of the biggest problems had also affected the men’s lacrosse team: a very condensed schedule due to the snowfall over the course of the winter. Over the course of two and a half weeks, the team had to play all eight of its games with limited practice. “It was a lot of work and everyone was pretty tired, but despite all that, we all played pretty well,” the mechanical engineering and engineering and public policy double major said. In addition, Head Coach Emily Patterson moved to Germany near the end of the season, creating a leadership void. “Not having a coach during that time was pretty difficult.” To fill the leadership void, Eigen said everyone stepped up to support each other. “Mostly, we were equals on the team, and we worked together to coach ourselves.”
Despite these circumstances, the Tartans continued to forge ahead against their competition. In their fourth game of the season, the team blew out Marshall University 15–1. Their rematch against Indiana University of Pennsylvania (IUP) was a particular high point for the team. When the Tartans opened up their season against IUP, they lost 10–4. However, the Tartans got their revenge in their second matchup, defeating the Crimson Hawks 9–4. “Playing them is always a good challenge for our team, but this year it was a big win and gave our team momentum again,” sophomore center Sarah Duncan said.
Eigen cited Duncan along with centers Amelia Jones and Julie Wu, as some of the top contributors of the team. Though their final game of the season was a 17–5 loss against the University of Pittsburgh, the Tartans considered this year quite a success, especially considering the outside circumstances.
Even though they couldn’t attend the playoffs this year, the team feels optimistic that they can do well next year. First-year attacker Jessica Jackson in particular is a cause for optimism. She contributed a lot to the offensive scores and ended up as the team’s MVP. “As a team, we were better collectively,” Eigen said. She cautioned, however, that there is still a lot of work for the team to get to the next level. “We have to get more time to practice before the actual season starts.” While she feels the pieces are there for a strong run next year, she knows that the team will need to be firing on all cylinders to do so. Still, it’s pretty clear that this team will become dangerous contenders in the WCLL.