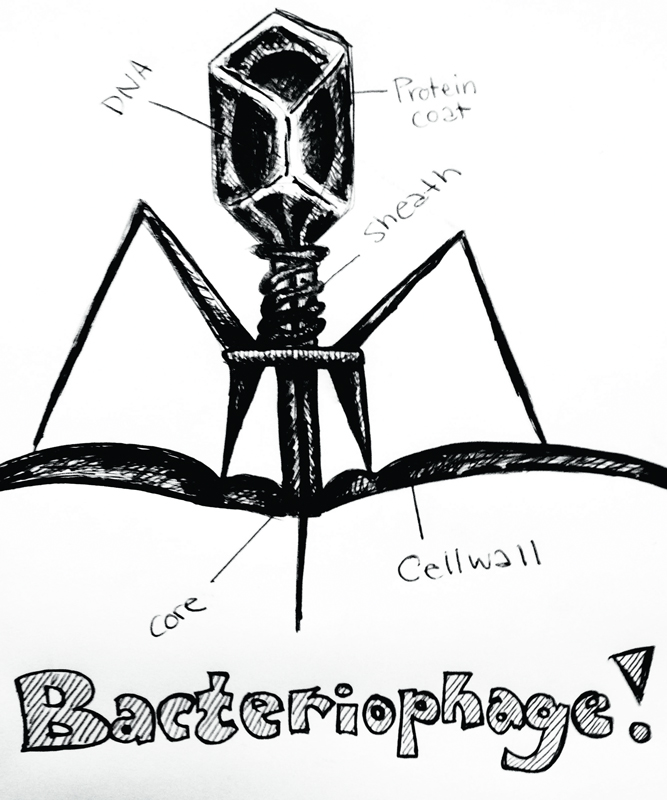 From nasty colds to the chickenpox, we all have to face infections from viruses at some point in our lifetime. But did you know that there is a virus that infects organisms many times smaller than you? In the early 1900s, scientists started to notice a group of viruses that infect and lyse bacteria, the billions of microorganisms that are prevalent virtually everywhere on Earth. Coined as bacteriophages, or “phages” for short, these bacterial viruses were named for their “bacteria eating” ability.

So how did scientists come across these creatures that cannot be seen even under the most powerful light microscope? According to a review in the Journal of Chemical Technology and Biotechnology, the first bacteriophage activity was found in river water, reported in a paper published in a French journal in 1896. In this paper, Ernest Hanbury Hankin, a British bacteriologist, noticed that the river water was effective in preventing the spread of cholera, a severe bacterial disease that had frequent outbreaks in India. However, it took 20 more years before the existence of bacteriophages was actually confirmed by American scientist Frederick Twort and French scientist Felixe d’Herelle.

The discovery was followed by many studies that showed the potential of bacteriophages in curing bacterial infections. For instance, in 1919, d’Herelle prepared bacteriophages that were administered to patients at a hospital in Paris. The phage preparation was made to treat patients with bacterial dysentery. Patients were then reported to have recovered within 24 hours of treatment.

With their ability to eliminate symptoms of bacterial infection, you might be wondering how these bacteriophages work. In order to survive as a group of viruses, the bacteriophages must find a way to replicate themselves. This is accomplished through a series of reactions during the infection cycle.

During the first step of the infection process, the phage settles on a bacterial cell by attaching to specific receptors present on the surface. Fibers allow for the hollow tail to push through the bacterial envelope, which is partly digested by enzymes from the phage. Once the tail penetrates the surface, DNA from the head is now able to pass through the hollow tube and into the cell. After the injection, the remaining bacteriophage, still located on the outside of the bacterium, is void of genetic material.

From there, the next steps taken in the cycles differ, depending on whether the phage is lytic or lysogenic. For lytic phages, only one path is followed after the injection of the phage DNA. As the injected phage DNA multiplies during the lytic cycle, phage capsids are also being produced within the host bacterium. The phage DNA, along with the host DNA, is then packaged into the capsids. In turn, new phages are created within the bacterium.

Afterwards, the bacterium undergoes lysis, or the disintegration of a cell through the breakdown of the bacterial cell membrane. Consequently, this process causes the release of mature phages. While many of the newly made phages possess the DNA of the original phage, a couple of them contain DNA fragments of the previously occupied host bacterium. The newly released phages then go on to repeat the cycle, which involves the infection and destruction of more bacteria.

In contrast with lytic phages, lysogenic phages can either proceed to replicate within the lytic cycle, or they can enter a dormant state within the cell. During the dormant state, the phage DNA usually becomes incorporated into the host DNA. As a result, the bacterial cell may acquire new properties from the added genes of the phage, such as the ability to produce toxins. Prophage is the term for the phage in this integrated state.

Despite their seeming inactivity, lysogenic phages have been proven to be valuable in scientific studies, as they are able to manipulate some of the properties of a bacterial cell.

In addition, the lysogenic phages have the ability to enter the lytic cycle at any time. Such transition is usually triggered by the exposure of the bacterium to harsh environmental conditions, including exposure to ultraviolet rays or mutation-causing chemicals.

Even with the medical promise found within bacteriophages, phage therapy is still relatively uncommon. This is mainly due to the fact that critics attacked d’Herelle’s early studies and were unable to replicate them, which cast suspicion on the results. While phage therapy is still practiced in Eastern Europe and the former Soviet Union, this practice has long ceased in the Western world. The controversy about d’Herelle’s work, combined with the rise of antibiotics, eventually led to a rejection of phage therapy.

Often prescribed by doctors to treat bacterial infections, antibiotics have become a household staple in the medical cabinet since the discovery of penicillin in 1928. However, the overuse of antibiotics has led to their decreasing efficacy in treating bacterial infections, as the elimination of a large population of bacteria has led to the emergence of stronger and more resistant bacteria.

As antibiotic resistance becomes a growing threat to public health, there has been a renewed interest in phage therapy. Phages are highly specific and are easy to modify when they attack bacterial targets. The extensive use of phage therapy in Eastern Europe and the former Soviet Union has been proven safe to patients as well as commercially viable. With increasing knowledge of bacteriophages’ abilities, phage therapy may be an answer to the woes of many Western scientists, doctors and patients in the fight against bacterial diseases.