Matt and Kim get CMU dancing and grooving 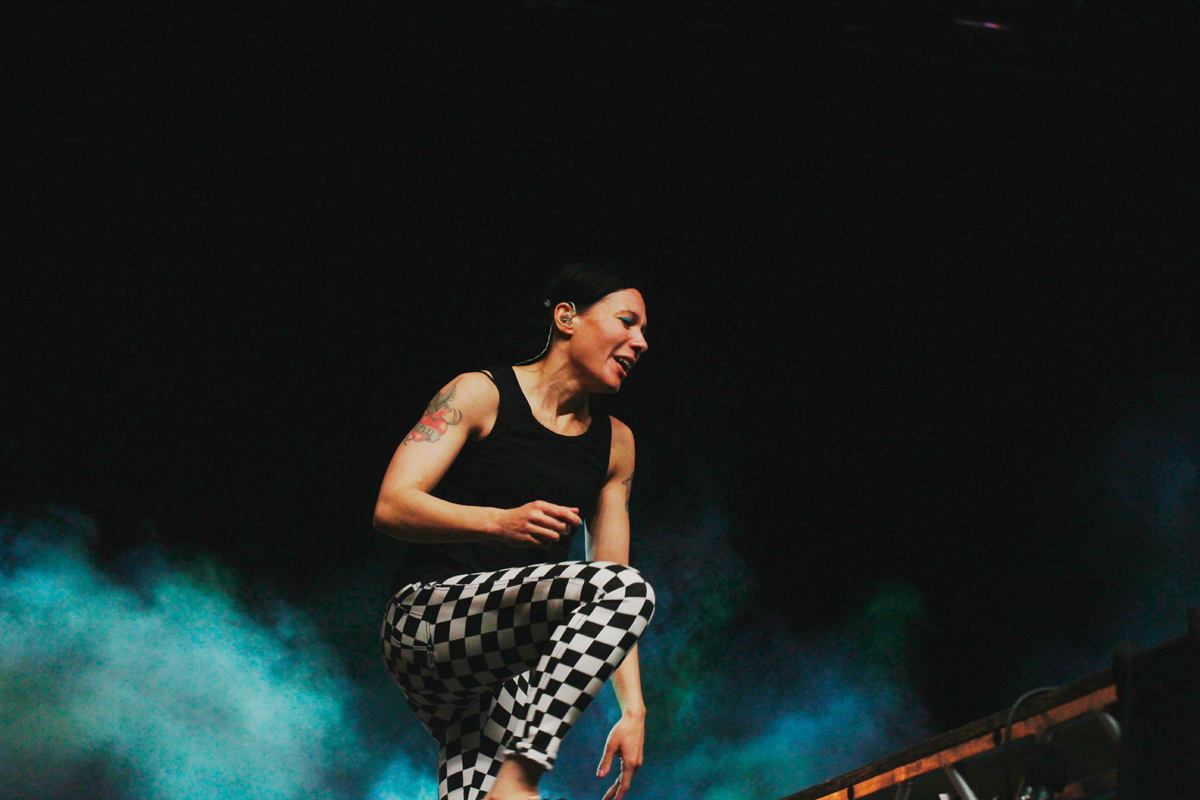 Married couple Kim Schifino (left) and Matt Johnson (right) have a charismatic and infectious energy on stage that can rouse a crowd, even if they are unfamiliar with Matt and Kim’s music. (credit: Michelle Wan /Personnel Manager)

Carnegie Mellon students, bogged down for long semesters by the pressures of being Carnegie Mellon students, are known to leave their responsibilities in the classroom and party hard enough to turn any parent red for that one special extra long weekend every year: Spring Carnival. This year, nowhere was this more true than at Saturday night’s Matt and Kim concert. People danced wildly, sang, and screamed their lungs hoarse. People got on each other’s shoulders and crowd surfed all evening long. By the end, the concert felt like an intimate outdoor music festival.

The evening started at around 7:30 p.m. with opening act RJD2, a DJ from Philadelphia who works in what he likes to call “Psychedelic Soul.” For his set, he combined a mixture of jazz, trip hop, and dance to gradually build the crowd’s anticipation for the main act. Even though he started reasonably early with a thin crowd, he built his set perfectly to slowly warm everyone up, and was a good complement to what was about to come. By the time Matt and Kim stepped on stage, the crowd was well primed for what came next.

Matt Johnson and Kim Schifino are an archetype of atypicality if there ever was one. She plays the drums, and he sings and plays the keyboard. And even with, or perhaps because of, this sparse arrangement, they make big, loud, stadium-sized music designed to get maximum hands in the air. And even though they write at the intersection of pop and dance, their music is unabashedly independent and veers away from anything you might find on the airwaves. More than anything else though, they have a reputation for playing high-powered, in-your-face shows. At Carnegie Mellon, Matt and Kim more than met the craziness levels that they are known for.

Matt introduced Kim as she walked on stage as “his partner in crime, and in sex.” This introduction was just the first in a string of hilariously over-the-top antics that set the mood for the rest of the evening. The energy emanating from the two was stunning. One song in, Matt mentioned that Carnival was the duo’s first outdoor concert of 2015, and that the heavenly weather was a sign that the evening was going to be a lot of fun. With that sentiment, they continued their set. Kim often jumped on top of her drum set to dance while she played. Matt sang his lungs out, moving all over the stage, dancing and playing the keyboard all the same.

The duo used an unbelievably wide assortment of tricks to keep everyone engaged. For one song, they threw 400 unfilled balloons into the audience. Soon enough, the entire sky was patched with neon, and the already packed ground was full of people jumping to catch the balloons. For a ballad, Matt and Kim ordered the shorter people in the crowd to to climb on of the shoulders of others, and wave their hands in the air. For another song, Kim walked off the stage, onto the audience’s hands to dance. All the while, a massive screen continuously filmed the audience.

One set and one encore later, most people looked like they had just emerged from a night club — exhausted, grimy, and sweaty, but utterly satiated. They left the Mall strewed with confetti and popped balloons, Matt and Kim’s distinctive mark on the campus. This week, most students will go back to a regular work schedule. As a break before the final three weeks of the semester, the Matt and Kim concert was an excellent chance to experience the frivolous things in life that we so often miss at Carnegie Mellon.