Middleditch and Nanjiani bring the laughs 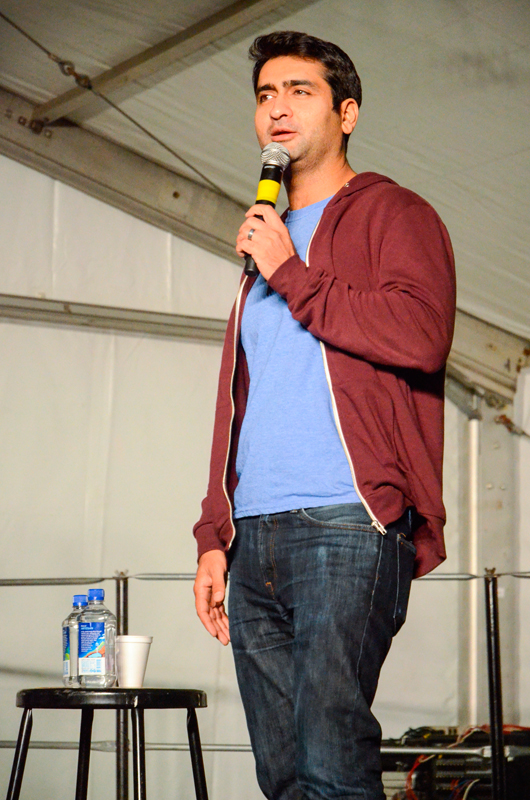 “Who here likes robots?” Silicon Valley actors Thomas Middleditch and Kumail Nanjiani asked the crowd as they opened their comedy show on Midway Thursday night. To no one’s surprise, the crowd’s enthusiasm was overwhelming. Nanjiani even stated, “that was the most aggressive response I’ve ever heard to robots.” Middleditch and Nanjiani’s sets were very standard, but, like Nanjiani’s mother said of his Amazon stand-up special, “none of the jokes were very dry.”

The comedians took the standard route of self-deprecation, mostly pertaining to their nerdiness. Hitting home with an audience that celebrates its school’s traditions of playing Quidditch and weird Carnival activities, Middleditch and Nanjiani fit in just fine among the Carnegie Mellon populace.

The two opened together, and within a few minutes, Nanjiani introduced Middleditch, who took the stage solo for about 30 laughter-filled minutes. The laughs weren’t continuous, though, as Middleditch supplied the crowd with plenty of awkwardness — his vulgar jokes were, perhaps, a little extreme for some students. After trying to set up a single girl and guy in the crowd, Middleditch recounted his high school experience, his brief college years, and a near death experience.

“Thomas Steven Middleditch: I always felt like my name belonged in an old English novel. Like I’d be the boy asking ‘Please sir, can you spare a bit more soup?’ and he’d reply ‘No, you rat bastard. Steven — stop touching your penis.’”

Middleditch sometimes invoked his father’s British and Severus Snape-like mannerisms in his set. He proceeded to then tell the story of his near-death experience at the hands of the Pacific Ocean in Australia. When talking about death, Middleditch maintained a level of hilarity unparalleled by most comedians, making this one of the best Carnival comedy shows in years.

Middleditch and Nanjiani have been fellow comedians and friends for over ten years. After they both started their careers in Chicago, the pair were elated to find that they and many of their friends were cast on HBO’s Silicon Valley, which airs every Sunday on HBO following the hit drama Game of Thrones.

Nanjiani is a fitting actor for the role of Dinesh on Silicon Valley. He is a Pakistani self-identified nerd from Karachi, who majored in computer science in college. He opened, as he usually does at his comedy shows, with his heritage, discussing his parents’ idiosyncrasies and his own. A remarkable thing happened, though, as Nanjiani met another Kumail in the crowd who was also from Pakistan. Telling the crowd “You can all leave — Kumail and I are going to have a conversation,” Nanjiani began to use this fellow Kumail’s similarities as improvised material for his stand-up. His stage presence was very comfortable, and his big laughs were executed to perfection.

It was at this time that then Nanjiani brought Middleditch back on stage, and they closed the show just as they had opened it: together. They further discussed their nerdiness, still prime material with Carnegie Mellon students late into the night, and they made a plug for their show. A competition sprung up within the crowd, proctored by Middleditch and Nanjiani. There were three blu-ray discs of Silicon Valley, and hundreds of students. After many students made remarks as to why they should get the discs, the two threw them into the crowd, with Nanjiani remarking “are you seeing these throws, man? I’m on a roll tonight!”

As the evening drew to a close, it was clear that both of them were on a roll. The student crowd left satisfied and in good spirits. The two are a pair worthy of recommendation for any standup viewers.