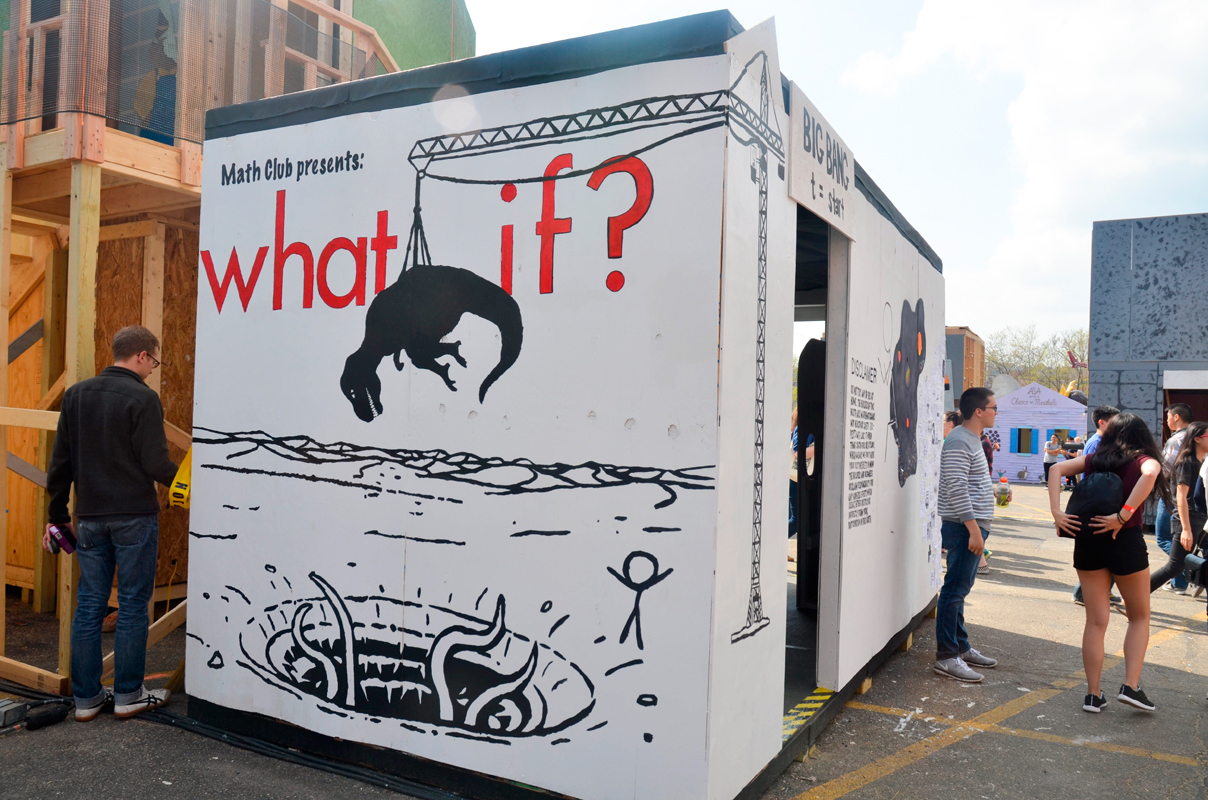 From clockwise left: Math Club, KGB, MCS and were among the winning organizations for their booths. Booth topics varied from accessible children’s literature to more adult novels. (credit: Danielle Hu/)

If you stepped onto Midway during this year’s 101st Spring Carnival celebration, you may have noticed some familiar faces — no, not the faces of peers or fellow alumni, but the faces that appeared in some of your favorite books.

This year’s Booth theme, Living Library, brought some of the most prominent books of the past and present to life on a Midway that seemed particularly polished. Despite a few hitches, like the failure of Delta Gamma and Alpha Chi Omega to open their Jumanji and The Twelve Dancing Princesses booths, respectively, it was delightful to see old classics like the Berenstain Bears and newer books like Life of Pi brought off the page and put onto the pavement of the Morewood Parking Lot.

The Tartan similarly takes a look at every nook and cranny of the booths to determine which are the most successful, as well as which booths were most underrated. This year, we award our third annual Boothy Awards in what were, although not necessarily category winners, some of the best booths this year.

The Architecture Boothy for Best Design

Kappa Alpha Theta takes this boothy for their unique staircase leading up to the second story that replicated a tornado with a grayscale theme to match the aesthetics of the Wonderful Wizard of Oz’s movie counterpart. The kitchen from Kansas at the beginning of the booth was also quaint and cozy, while the staircase leading down from the second story was impressive with its flying monkey at the base that looked as if it was taken straight from the movie.

In a close second, Delta Tau Delta’s Journey to the Center of the Earth booth had a similarly impressive staircase that replicated the feeling of walking into the depth’s of the Earth’s many layers. The loud, crushing sounds that reverberated around the staircase and a special mirror illusion added to the effect of walking into a never-ending space.

The Pong Boothy for Best Game

Phi Delta Theta’s Oculus Rift game at their Twenty Thousand Leagues Under the Sea booth went above and beyond to deliver a unique experience to the user. Guests put the virtual reality headset on and then proceeded to shoot the giant squid from the book out of the water to save the Nautilus submarine. The game was not only immersive, but generally seamless and fun to play.

Other games, like the Singapore Students’ Association’s The Little Prince game, were right up there with Phi Delta’s. The game had two users interact with a touchscreen to dig up plants that popped up on the screen. However, Phi Delta’s booth took the cake with its game’s impressive scope.

The TSA incorporated impressive art into their Life of Pi booth. Not only did they place an elaborate mural on the outside of their building that gave the whole structure an ancient feel, but they also constructed a number of paper mâché animals that visitors could interact with. Among the animals were the book’s iconic tiger in the equally iconic raft, a peacock, and a zebra. The art, both inside and outside, of this book captured the essence of the book perfectly.

The Boothy for Most Family-Friendly Booth

The Asian Students Association (ASA) takes this award with their Cloudy with a Chance of Meatballs book. Of course, the theme of this booth automatically lends itself to a family-friendly atmosphere.

But ASA followed through with a fun fishing game for the kids. A stream pushed wooden food through the game’s area. Players had to use a magnetic fishing rod to get the food. Overall, the booth had a light-hearted feel that had the potential to keep kids hanging around for much longer than they would at some of the more serious booths, like Student Dormitory Council’s Nineteen Eighty-Four and Fringe’s Sherlock Holmes booths.

The Tartan’s favorite booth overall was Alpha Epsilon Pi’s Jurassic Park. All components of this booth were put together well, contributing to a structure with solid features all around. Not only was the game, which involved a gun and dinosaur targets, fun, but there were other impressive features like museum artifacts that contributed to a learning experience.

The fraternity’s largest “Wow” factor was the real Jeep sitting at the bottom of the booth on the way out. The room containing the Jeep was a great place for photographs and, come on, there was a Jeep in a booth! For all these reasons, Alpha Epsilon Phi’s booth squeezed out this best-of-booths award.

While the 100th Spring Carnival had some of the best booths The Tartan has seen to date, this year’s booths were able to compete with the booths created for last year’s milestone event. The Living Library theme is, of course, a dream for avid literary fans like the members of The Tartan’s staff.

However, theme aside, the booths this year were elaborate with some unique structural designs, the likes of which are rarely seen. Games were particularly enjoyable and the intricacy of the art adorning booth walls lived up to previous years.

This year, it showed once again that Carnegie Mellon’s students have their hearts in this Spring Carnival main event. Here’s to many more years of booth, although next year will most likely see booths constructed not on the Morewood Parking Lot, but in the lot next to the College of Fine Arts.

Will those booths live up to the ones constructed in the Morewood lot despite the possible logistical challenges of adapting to a new booth location? Time will tell, and the fourth annual Boothy Awards will be here to dissect those structures.

Independent
1. TSA: Life of Pi
2. ASA: Cloudy with a Chance of Meatballs
3. KGB: Where the Sidewalk Ends