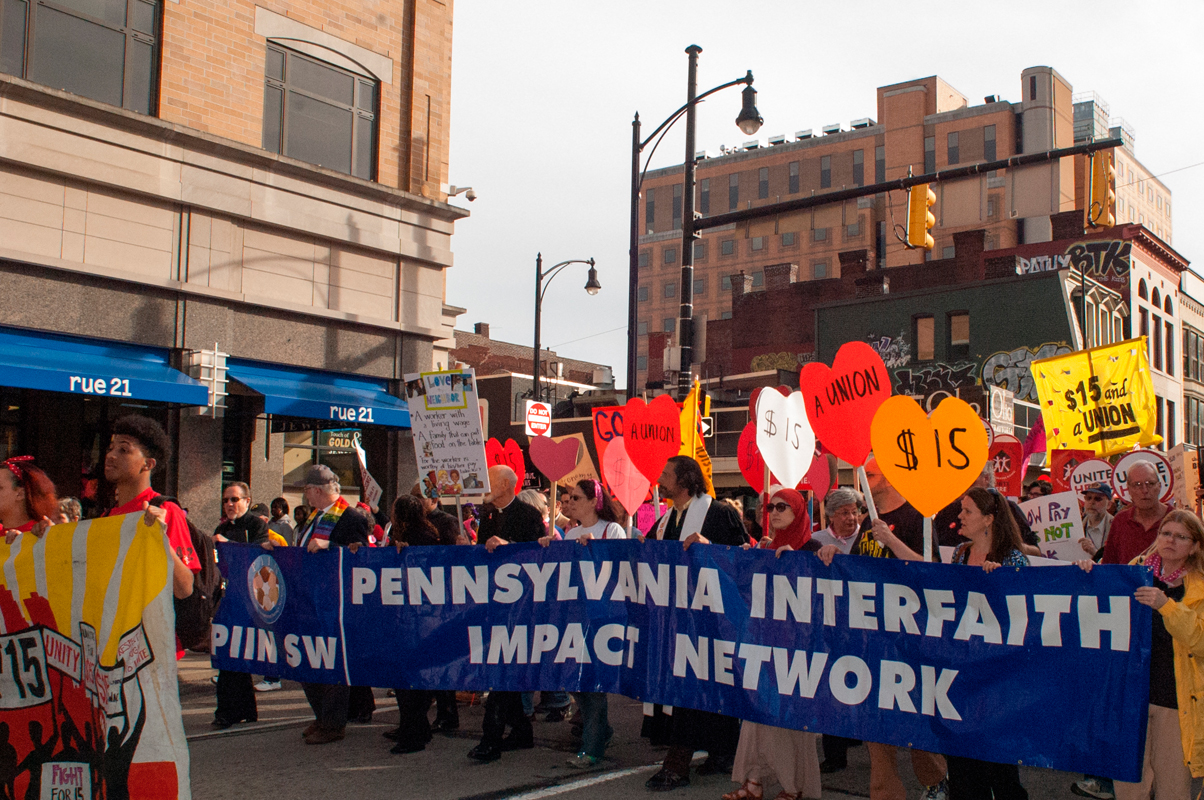 Workers from the surrounding Pittsburgh community joined together with Pittsburgh college students on Wednesday to advocate for higher wages. (credit: Justin McGown/Contributing editor)

Shortly after a closure for the University of Pittsburgh’s annual Bigelow Bash, Bigelow Ave. was once again closed to traffic last Wednesday. This closure wasn’t for a student event; instead a large crowd filled the cordoned-off street and rallied around a pickup truck. Speakers acted as a makeshift stage. The demonstration was just one of more than 200 across the country where fast food workers went on strike. Their demands were wages increase to $15 an hour, and the formation of a union. The event was called “Fight for 15.”

Members of several local unions showed solidarity with the fast food workers. Among the unions present were 32BJ SEIU security guards and employees of the University of Pittsburgh, including adjunct professors, with the United Food and Commercial Workers Union Local 23, and many more. In addition to the unions, representatives of numerous places of worship, political organizations, student groups, and even the Westinghouse High School Marching Band attended.

Among those giving speeches from the back of the pickup was Jasiri Oronde Smith, who performs as Jasiri X. A local activist and emcee, Smith was there with 1Hood, a local media organization that focuses on producing socially conscious hip-hop with an emphasis on Pittsburgh’s black community.

“Pittsburgh is America’s most livable city,” Smith told the crowd during his set, “so why do we have to fight for a living wage?”

He also led the crowd in several chants and songs, performing his single “Don’t let them get away with murder.”

Chris Ellis, an employee at the McDonald’s on 3708 Forbes Ave., had a hoarse voice from shouting slogans and talking over the din to his fellow demonstrators. Ellis said he had been part of the movement for about a year and that he was there that day because “It was time for a change.”

“We want the same thing Martin Luther King did with what he did,” Ellis said. “[It’s] not just about the 15 and it’s not just the union. It’s about respect, dignity, and the right to organize.”

Elizabeth Massey, who works at a Wendy’s, said part of the reason for her presence was to send a reminder. “I’m here because if there were no me or them, there would not be any easy lunches, no medicine pick up … I’m doing this for me and my son, who’s six.” Massey stressed that the support the strikers have had has been incredibly wide reaching, coming also from non-Pittsburghers. Massey specifically mentioned an out-of-towner from Philadelphia coming to volunteer their car for the cause.

She was convinced that the day’s activities would have an impact, saying, “I believe we will make it.” This sentiment was echoed around 5 p.m. when the protest turned into a march, pushing on to Forbes Avenue and halting traffic. A further police cordon was set up at the intersection of Forbes and Meyran Avenues, which the protesters slowly marched toward.

The Westinghouse Marching Band took the lead, while the protesters unfurled banners and waved signs demanding higher wages and respect, for the most part — A few signs bore statements associated with the Black Lives Matter movement. Also carried was a puppet in the likeness of Greg Peaslee, UPMC’s senior vice presidnt for human resources.

When the protesters reached Meyran Ave., they abruptly turned left and crowded around the entrance to the Iroquois Building. There, they posted “public notices” revoking UPMC’s charity status, and chanted “UPMC you are not a charity!”

Continuing onward to the McDonald’s on Forbes, the protesters began sitting down to chants of “Whose streets? Our streets!”

Rev. Rodney Lyde of the Baptist Temple Church addressed the crowd there and reiterated points about the fact that Pittsburgh, named the most livable city by the media, still had immense income inequality and poverty. He also cheered the groups’ success in marching.

“I thought McDonald’s is supposed to be open 24 hours a day,” he said to the crowd sitting on the pavement in front of the shuttered restaurant, “But this doesn’t look too open. I do believe we shut it down!”

After his address the crowd began moving again until it returned to Schenley Plaza, near where the march had begun earlier in the day. There, the chief organizer of the event, Bempoma Pieterson, a political science and communications major at the University of Pittsburgh, thanked all of the participants in the march and declared it a rousing success.

“They were begging us to get out of the street,” she told the assembled strikers, protesters, and onlookers. “We backed the traffic all the way up to the parkway.”
The assembly began breaking up around 6 p.m., though many stayed in the plaza to discuss both the day’s event and what actions they might take in the future to accomplish their goal.