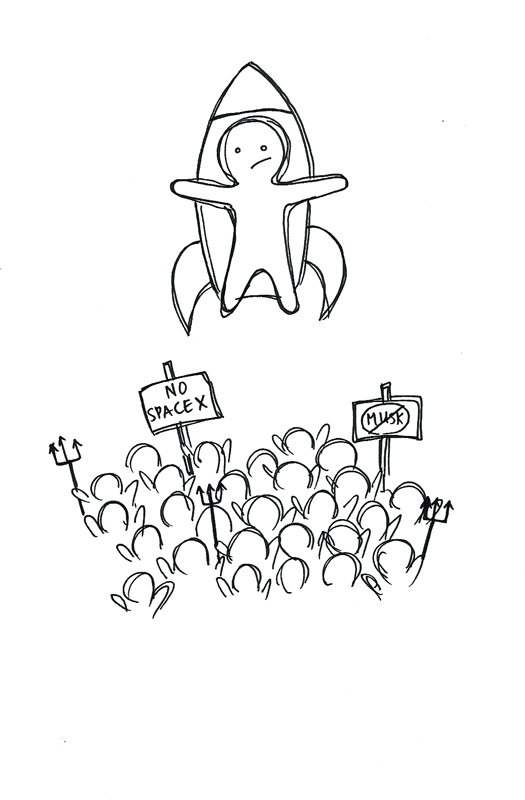 On Tuesday, Apr. 14, Elon Musk’s transport service company, SpaceX, launched a rocket for the second time this year. Onlookers had high hopes, but were disappointed when the rocket crashed and exploded upon landing.

Even though the mission had been a resounding success for SpaceX itself — which celebrated hitting the landing site at all — questions still flew over whether SpaceX was actually a new face of the space industry or just a high-tech pretender.

In 2013, critics circulated a video of a car made by Tesla — another company owned by Musk — catching fire after crashing into a pole on a highway.

The accident was notable in its isolation; no other Tesla engine had caught fire before, while crashes cause fires in dozens of other brands on a weekly basis. The survivors of the accident walked away unscathed, but Tesla’s reputation didn’t.

For critics, one failure was enough to pull Tesla off its pedestal, leading to a 6 percent drop in the price of Tesla stock over the course of several hours.

It seems that everything that goes wrong for Musk is instantly elevated to a disaster of epic proportions. Musk is not given the privilege of trial and error. This tendency to try and smack down technological progress at any hint of imperfection is a dangerous symptom of American anti-intellectualism and resistance to change.

The basis of resistance to technology relies on comparing progress to perfection rather than old technology. Cars catch fire when they crash into poles quite often, but the public jumped on Tesla after a single freak accident. In crashes, Teslas have been proven safer and less likely to combust than other car brands. Following the accident of 2013, Tesla soon added fireproof titanium underbodies to all of its cars free of charge.

Tesla had the guts to admit its mistakes, and to be proactive in fixing them. However, people often think that new technology is unusable if it’s not perfect. The status quo works “just fine” — except when it clearly doesn’t. When we use separate standards for new and old technologies, we keep those new technologies from gaining mainstream acceptance or improving the status quo. If we look at NASA, many rockets and other space vehicles fail in testing.

Unlike SpaceX, though, NASA and similar organizations are given both the benefit of the doubt and the resources to improve their designs. There’s no reason to believe that two crashes mean that SpaceX will never build a totally functional rocket. If anything, a public launch without any prior failed tests would be cause for concern; a product that never fails in tests will never succeed in the market.

In order to create an environment conducive to progress, people have to give that progress a chance. SpaceX’s most recent failure was public, but that does not diminish their accomplishments.

The rocket did not stick the landing here, but its ultimate success will rely on baby steps: its tests, failures, and the lessons SpaceX takes from each. Meeting temporary failure by calling Elon Musk delusional and innovation wasteful is a great way to ensure the future never comes.