Quiros displays excellence on and off the soccer field 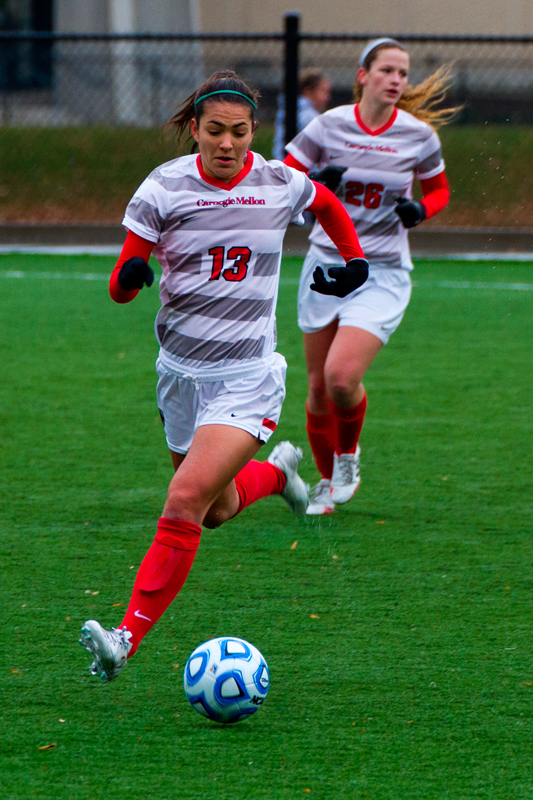 The Carnegie Mellon Women’s Soccer team had an especially strong season with important contributions from all their players. However, the influence of one midfielder in particular served as part of the teams’s driving force when getting the ball into the opponent’s net. Carson Quiros is a junior professional writing and creative writing double major who plays central midfield for the Tartans. She put together a phenomenal season, starting in 18 games and notching 9 shots on goal, 2 of which got past the keeper to make game-winning goals.

Her performances earned her a spot on the All-University Athletic Association (UAA) Second Team and the National Soccer Coaches Association of America All-Scholar All-Region Third Team. Despite all of that, her importance on the field cannot be expressed in numbers, owing to the fact that she serves not only as a strong defensive player but also a facilitator and motivator to unleashing the full potential of the teammates around her. Behind every great player lies a remarkable story, and Quiros’ story confirms that.

The youngest of four siblings, Quiros started off playing soccer at the tender age of 3. She credits her parents for giving her the opportunity by putting all four siblings in recreational sports. Quiros’ talent and skill in the sport were noticed early as she made the club’s A-team in the fifth grade. Her commitment to the sport only increased from there on out as she narrowed down her sports to just basketball and soccer, dropping softball and gymnastics.

In spite of her overwhelming dedication to soccer, Quiros presented great athletic potential and was part of her school’s varsity basketball team alongside being part of the school’s varsity soccer team and her club’s soccer team. Her brilliance as part of her club, Top Hat (an all-girls club in Atlanta), attracted the attention of Carnegie Mellon Head Coach Yon Struble. Ever since she was recruited by Struble, Quiros has developed a strong relationship with the coach that has helped her expand on her potential and grow as a player by capitalizing on skills that she already had while also cultivating new ones. Quiros’ formidable understanding of the game stems greatly from the fact that, over the years, she has played in positions ranging from a defender to a forward, eventually settling down as a central midfielder.

When asked about the team’s fantastic performance this season, Quiros credited it to the extensive amount of preparation that the team goes through during their preseason and the summer, which makes the regular season more manageable. She also acknowledged that the team used their speed and their technical knowledge to dominate its games. Following a disappointing season last year, Quiros said that the team didn’t build expectations for this season and focused on playing their best every game while still staying humble.

The difference was definitely visible; the team came out swinging this season and won some spectacular games against challenging opponents. On a personal note, Quiros felt that she could get into the box and finish headers from crosses as well as use her ability to get into positions where she could use her long shot capabilities. Quiros feels that for the upcoming season, one of the things that could help the team advance even further is developing the same chemistry with the incoming first-years as they did this season. Quiros also feels that the team needs to focus on winning games that they dominate throughout the 90 minutes and avoiding slip-away games. On a personal note, Quiros feels that she needs to lead the midfield more and be more prominent offensively.

Quiros has had some great motivation and support from within the team. During Quiros’ first year, she was nurtured in her position by ex-captain Stephanie Hare. This complemented Coach Struble’s attempts to introduce a more offensive mindset into Quiros’ play. Quiros also cultivated a great relationship with classmate Alli McGugan, a junior business administration and decision science double major who plays forward for Carnegie Mellon. Currently roommates, the girls are there for each other on the field and off, constantly supporting and driving each other.

Quiros is at Carnegie Mellon for a lot more than its soccer program. Having first looked at a number of Ivy League schools, Quiros disliked that all of them had athletes seen as less academically-minded than everyone else.

When she visited Pittsburgh, she realized that while every other school she had visited possessed some flaw either in lifestyle or in educational programs, the combination of Carnegie Mellon and Pittsburgh proved to be a perfect match.

She was attracted to the strong writing program and its specificity in individual fields. During her time at Carnegie Mellon, Quiros has been especially impressed that all its students perform at such a high level over a wide variety of fields, which she says can be pressuring but exciting.

There are days when academic or other woes put you off your game, and Quiros appreciates that the coaches are very understanding of that. She appreciates that practices provide a place to hone skills, a great outlet, and a place to meet and connect with diverse groups of girls across majors and grades all of whom, on some level, share similar experiences and interests.

It is a rare occasion to come across a player so well-rounded both on the field and off of it, and especially humbling to see such a player continue to want to grow and expand her skill set.

Indeed, it is this that sets Quiros apart from most other athletes and give her the markings of a leader. Given her dedication and that of the team, there is great reason to be excited about the Tartan’s next season.